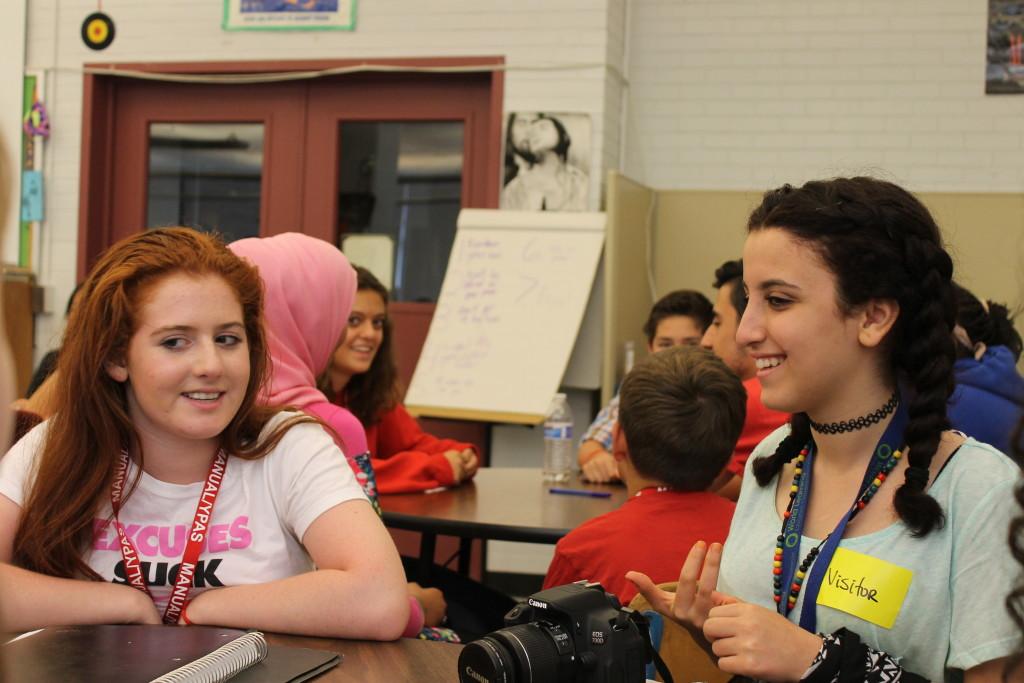 These students were in a highly competitive exchange program called Iraqi Young Leaders that traveled to Louisville. The program also stopped in Vermont and Washington D.C. earlier in their tour of the US.

During their time at Manual they sat in on a number of different J&C classes including Yearbook, Newspaper, freshman English, and even the RedEye newsroom. The students came with various interests, including sports writing, social justice issues, and most of all, social media.

“Social media is a big part of my teenage life in Iraq because we don’t have a lot of things to do, so I’m on Twitter constantly,” said Sama Seqvi (15, 11th grade).

Christy Rhodes, the program manager, explained that the main purpose of the experience is to build leadership and teamwork skills in professional and educational environments, as well as to introduce the students to new ideas for their journalism programs back home, such as school newspapers or yearbooks.

“Coming to the U.S. and seeing America and all the diversity in it firsthand–families from different parts of town, different family structures, and lots of backgrounds and walks of life–really helps them to kind of experience more of the U.S. themselves,” said Rhodes. “I think this program dispels all kinds of stereotypes people may have about Iraq and the U.S. We also just want to make sure that they interact with American teens so they can work and talk one-on-one and see the differences or, more often than not, the similarities that they have.”

Students noted the differences between American schools and those they have at home.

“The classes were very unique, the whole school was unique. School is not like this in Iraq. There, it’s totally different; it’s all study and work and no having fun,” said Hussein Hadi Johnny (16, 10th grade).

Mirna Alsi (16, 11th grade), has had a long-running interest in journalism before she came, evidenced by photography awards she had won back home in Iraq.

“I go to a small, private American school. We don’t have a lot of stuff, but we do have journalism classes. Our program makes us bring our own equipment and laptops though,” said Alsi.

Along with Manual, the teenagers also visited Kentucky Kingdom, the Portland Christian School, and Mammoth Cave National Park during their stay in Kentucky.

A farewell event for the students will take place on Monday, August 31st at 5:30 p.m. at the Bristol Bar and Grill in Louisville.