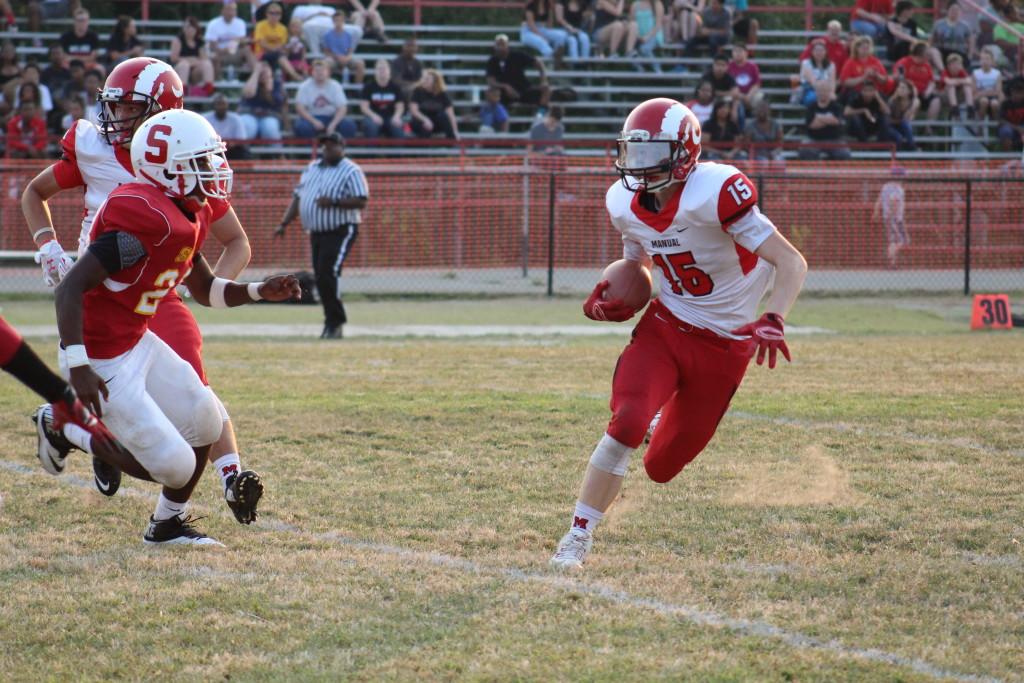 Will Marshall (#15) runs for a 50 yard touchdown on first down in the first quarter. Photo by Kate Hatter

The Crimson offense fired on all cylinders throughout the evening, with the team taking a 37-0 lead in the first quarter and never letting their feet off the gas pedal the entire night. They also quickly established their dominance by forcing a Seneca safety only two minutes into the game during Seneca’s first possession. However, the team followed up this stifling defensive display with a less-than-stellar offensive drive. Quarterback Tim Comstock (12, #3) completed zero of his four attempted passes during Manual’s first drive, while running back Reece West (12, #1) only managed to pick up six yards in two carries on the drive.

With the continuation of Comstock’s inconsistent passing game, it appeared as if the Crimsons were doomed to another sluggish start. Comstock, however, was able to redeem himself with a 36-yard scramble for a touchdown, effectively seizing control of the momentum that would result in a total of eight touchdowns on the night for Manual.

“We started and ended the game well,” West said. “That was the first time we’ve started a drive with a touchdown.” West added that the Crimsons may have been particularly motivated to get off to a fast start after learning that one of their coaches’ mothers had passed away that evening.

The second touchdown of the night came not long afterwards. During Seneca’s very next possession, Manual defensive back Bryce Cosby (11, #7) snagged an interception that resulted in a 55-yard touchdown run. Manual went on to score three more touchdowns in the first quarter alone. The first was a 40-yard touchdown run by West, followed by a 55-yard kickoff return for a touchdown by Omari Alexander (12, #2) on the very next position. The final touchdown came after a Seneca punt was blocked by linebacker Keenan Bilyeu (11, #16) and recovered by linebacker Kenneth Jones (10, #25) for a touchdown.

“Our special teams really stepped up today,” Jones said. “In the past they’ve been a little iffy, but today they really showed out.”

The outstanding first quarter performance was supported by a multitude of less flashy offensive displays throughout the game, including a rushing touchdown by Cameron Canedy (10, #26), a receiving touchdown Donavan Murrah (11, #27) and a kickoff return by Antonio Hassell (12, #19).

West attributed this offensive success to execution. “The line was blocking,” West said. “They were firing off the ball. All of the backs were running hard and the receivers were catching the balls.”

“[The players] stayed in it this game. They played hard the whole time. We asked them just to not worry about the score, and I thought they did that,” Offensive Coordinator Russell Rigdon said. “I thought they played to the best of their abilities, every person we put in there, for the whole time they were out there.”

Along with the up-tempo offense, the Crimson defense was also a force to be reckoned with. Manual kept pressure on the Redhawks offense the entire night, racking up a number of sacks, fumbled snaps and fumble recoveries in addition to the blocked punt by Bilyeu and the interception by Cosby.

Despite the blowout victory, Manual is still looking to improve, especially since they face a bye next week.

“Bye weeks are always tough because you don’t have that goal at the end of the week that you’re working towards,” Rigdon said. “We’ll probably go about getting healthy and working our basic offense and defensive stuff. Just trying to get better at what we’re doing from an execution standpoint.”

“Linebackers–we still need to step it up. I think we’re lacking,” Jones said. “Through our bye, before we have Ballard, we’ll keep our heart. We’ll go through like we usually do, practice hard, make sure everything’s right for the Ballard game. We’ll come for them.”

This landslide victory improves the Crimsons’ record to 3-0 on the season. Their next game will be at home against Ballard on Sept. 18. Kickoff will be at 7 p.m.