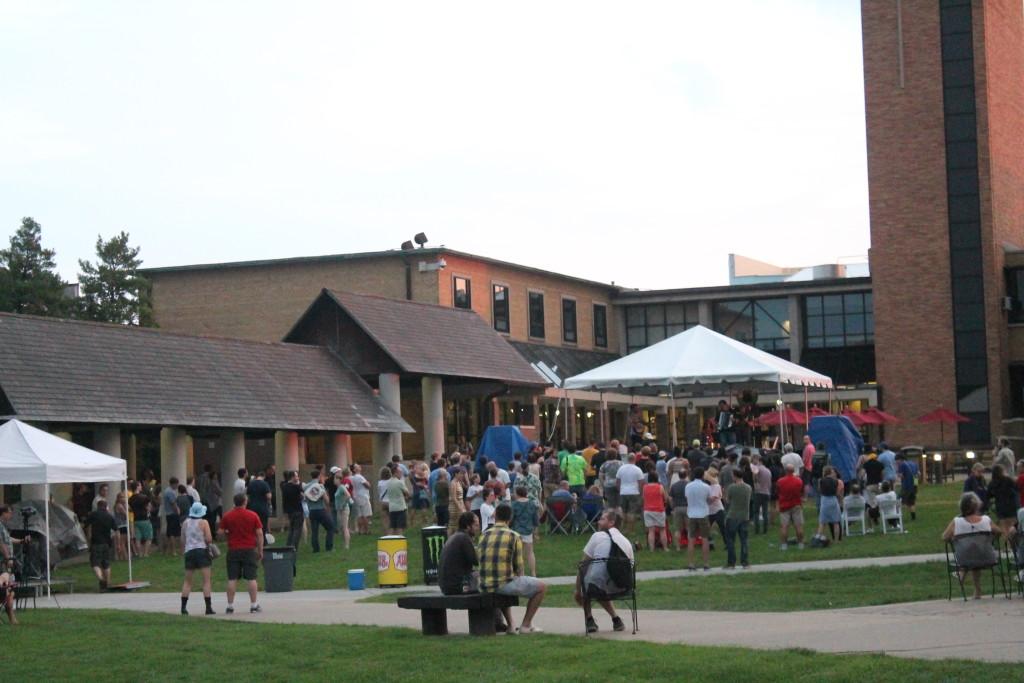 Created and produced by Bellarmine University alumnus Will Ford, Outsized Influence is an annual event that showcases local musicians, food trucks and artists. This year’s festival featured bands such as Merry Pranksters, Squeezebot, Slow Down Johnny, King Kong and The Foxery.

Ford said that he wants Outsized Influence to spotlight Bellarmine music and art for both students and the Louisville community at large.

“Bellarmine’s Activities Council brings in a national act every year,” he said. “Last year was Twenty One Pilots and Maroon 5 came a couple of years ago. I just realized that there wasn’t any sort of Bellarmine aspect to it, and I’ve always had this vision of college being a local thing, with people jamming in their dorm rooms and stuff like that.”

“The festival is a way shine a light for the community and the students on Bellarmine music and arts,” Ford continued.

The festival featured three stages, and each boasted large crowds throughout the day, with college and high school students alike gathering with parents to watch Louisville’s own perform.

“It’s nice to have something that’s completely local like this,” Rachel Kleinholter, a Bellarmine senior, said. “Our other festival in town–Forecastle–brings bands from outside to come to Louisville, and this is all about promoting Louisville bands, which is a good thing to see.”

The food trucks were also a hit, and festival-goers treated themselves to crepes, hot dogs and other items.

“This festival is a good thing to do Labor Day weekend,” Matthew Kleinholter, a Trinity High School junior, said. “It’s a chill venue, and the crepes are fantastic.”

Though the skies were clear at the beginning of the festival, storm clouds began to roll in toward the mid-afternoon.

“Last year the festival got rained out and we all had to go inside to watch the bands, and it looks like that’s going to happen again this year,” Lauren Russell, a Bellarmine student and festival attendee, said.

The weather did end up complicating the schedule, and local band King Kong’s show was cancelled. Amy Ritchie (Journalism and English), a Manual teacher and King Kong member, said the band was upset to hear that they wouldn’t be performing in the festival.

“It was really disappointing to hear that our performance was cancelled,” Ritchie said. “We always get pretty hyped up and nervous to put on a great King Kong show, and that energy is very intense–we usually can’t eat beforehand, for example–so to have to figure out what to do with all that energy was a real bummer.”

At the end of the night, Slow Down Johnny and The Foxery went on to play inside, and the outside stages were taken down before the rain started.