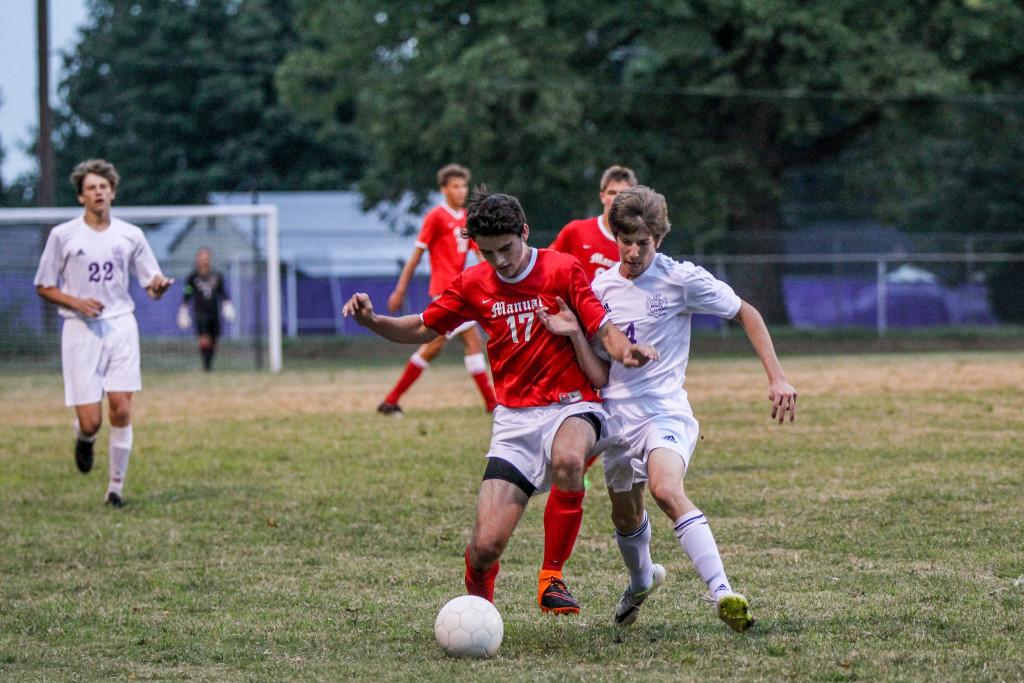 Just 45 seconds into the match, forward Dylan Barth (11, #9) already had a great scoring chance. However, before Barth could get a shot off he was fouled by a Male player inside of the penalty box, causing Riley Hook (12, #8) to have to take a penalty kick. Hook beat the keeper to the right side of the net to put the Crimsons in the lead for good just 53 seconds in. Combined with a Henry Jelsma goal in the fifth minute, Manual was off to a lightning fast start against rival Male.

“When you score early that kind of puts them on their heels, and then they have to press forward and that opens things up even more,” Manual Head Coach Bob Ramsey said.

The quick start lead to Manual being able to possess the ball and stay on the attack for an overwhelming majority of the match.

“It definitely picked up the momentum,” Jelsma said. “We didn’t have to worry about scoring goals, we could settle back and get our passing together and score more goals.”

Manual was able to add onto its lead when Trevor Lankford (11, #51) gave Barth a perfect lead pass from midfield in the 35th minute. Barth was then able to put in an easy chip shot over the Male keeper to give the Crimsons a 3-0 lead going into halftime.

“We really exposed the wings,” Jelsma said. “We would get the ball into the middle and then play it wide. We put in some nice crosses which really opened opportunities for us in the middle with the forwards and the [center-midfielders]. We got what we wanted: we won.”

Manual added two more goals in the second half, as Barth and Jelsma each scored a second goal. Jelsma’s goal came in the opening seconds of the second half, when Luke Gibson (12, #2) found Jelsma open under the net for an easy opportunity in the 41st minute. Barth found the back of the net after blowing past a defender and beating the goalkeeper in the 46th minute, giving the Crimsons an easy 5-0 victory over Male.

“The offense was very good all the way around,” Ramsey said. “We possessed the ball and moved forward in transition really well tonight.”

The Crimson defense did not get much work in since the offense almost always possessed the ball, although they looked strong when called upon.

“We were able to pressure them in the midfield,” Hook said. “Every time they had the ball there was somebody around them.”

Manual was able to prevent Male from taking a single shot in the first half. The Bulldogs had scarcely any scoring chances throughout the entire match. The few that they did get in the second half were few and far between, which gave Manual goalkeeper Andrew Hagan (12, #1) an easy night in the net.

The Crimsons will now turn their attention to the number one team in the state: the Saint Xavier Tigers. St. X shutout Manual 2-0 last year. This time around, Manual hopes that they can ride the momentum from the Male game.

“It gives us momentum,” Hook said. “We’re feeling good about our scoring chances and that has been the problem against St. X in the past; we just haven’t been able to score. It just gives us confidence.”