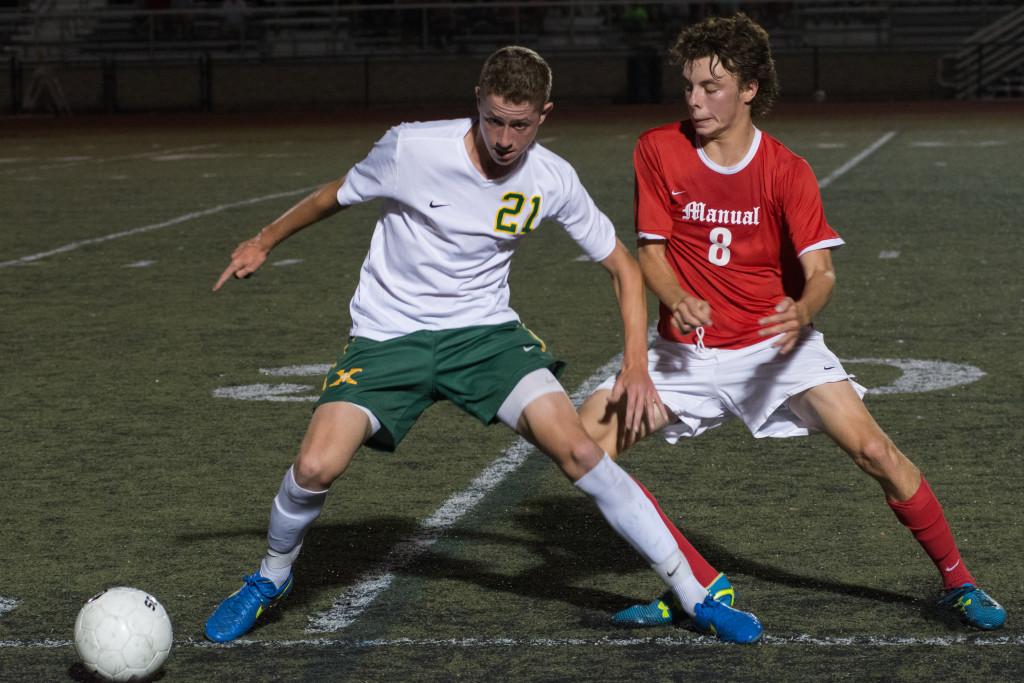 As the 42nd minute began, Colin Kremer (#19) stepped up to take a free kick for St. X against the Manual boys’ soccer team. Kremer’s shot bounced before Manual goalkeeper Andrew Hagan (12, #1) got his hands on the ball to make a seemingly routine save; however, the ball somehow squeezed by Hagan and dribbled into the back of the net to give the Tigers a 1-0 lead.

The costly mental error changed the match, as St. X was able to seize control after Kremer’s goal and held onto a 2-0 win.

The Crimsons; however, did give the Tigers a run for their money for the majority of the game. In the first half, Manual dominated play, as the Crimsons had seven scoring chances to St. X’s five.

“I thought that we got down the line very well,” Manual Head Coach Bob Ramsey said. “We had some good chances on crosses and on some possible headers.”

The Crimsons’s best chance came in the 28th minute, when striker Dylan Barth (11, #9) had a free kick from ten yards outside the box. Barth’s shot beat Tiger goalkeeper George Davis (#1), but went off the crossbar.

“We had a real good opportunity on the set play where Dylan hit the crossbar,” Ramsey said. “If we could have knocked something in there it would have put [St. X] on their heels, and then we could have attacked even more. When they scored on us it kind of went the other way so it’s hard to get back a goal against a good quality team like St. X. It took a lot out of us.”

Manual could not take advantage of another golden opportunity in the 20th minute when Nicholas Zehnder (11, #10) gave Henry Jelsma a cross. Jelsma’s header sailed high, and the match remained scoreless. Manual outshot St. X 5-4 in the first half.

Hagan made a pair of diving saves in the 17th and 39th minutes to keep the Tigers off the scoreboard early.

“We went at them and attacked,” Hagan said. “We weren’t making the same mistakes that we made in the second half.”

The Tigers added a second goal in the 70th minute on another free kick, when Matthew Phelan (#8) put in a perfect shot into the top left corner of the goal.

“We played fairly well overall; we just didn’t finish,” Ramsey said. “But trying to get a goal back against a quality team takes a lot of energy.”

In the second half, St. X was slowly able to wear down the Crimsons.

“They have a deeper bench, and they seemed to be in better shape,” Gibson said. “But that’s something we can change for next time.”

Despite the outcome of the game, tenth-ranked Manual was able to prove that they could put up a valiant fight against the fifth-ranked St. X.

“We can play with the best teams in the state,” Hagan said. “We just have to cut down on some of our mental mistakes, and we’ll be good.”

Manual will look to bounce back against Waggener at 7 p.m. on Thursday at Manual Stadium.