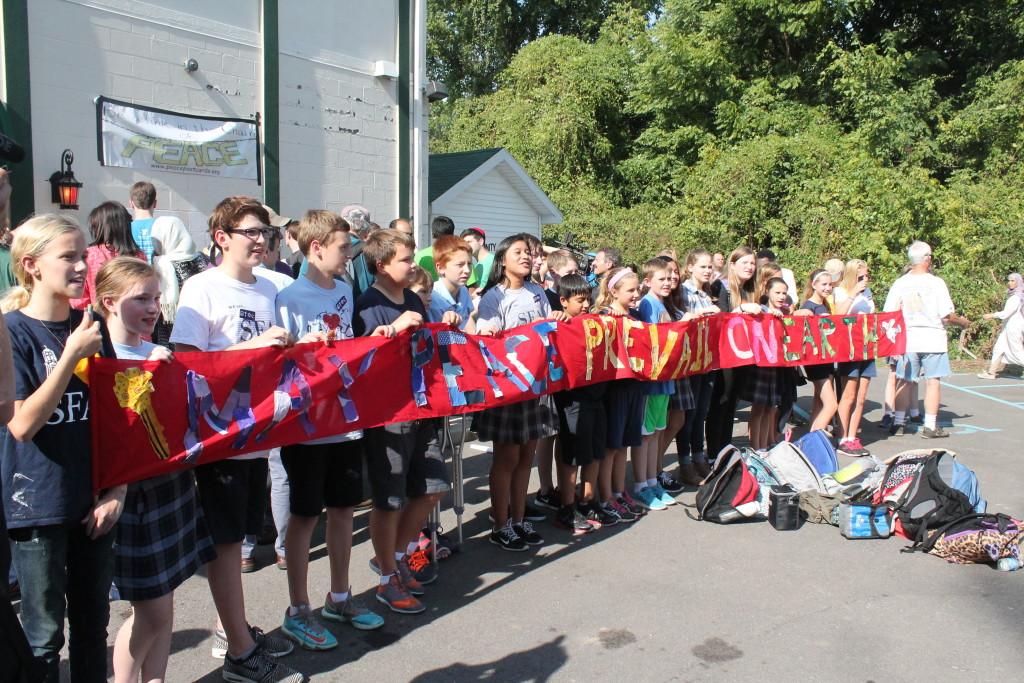 Manual students and the Louisville community came together to help clean up the Louisville Islamic Center on Friday, Sept. 18 after it was vandalized on Wednesday afternoon. The event, which was organized by the mosque, was a chance for local residents to spread a positive message in spite of the anti-Islamic graffiti. Attendees ranged in age from young children to adults, and included many students from high schools throughout Louisville.

Misha Haq (12, MST) who worships at the Center, was more shocked than angry when she first heard about the vandalism.

“The mosque has been like a second home to me for so long and to see those hurtful words spray painted onto our place of worship was just heartbreaking. I was honestly just in shock,” Haq said. “I have never really been directly threatened or teased about my religion, so it was a big surprise to see so much hate plastered on a place meant to bring people together.”

However, Haq was pleased to see that much of the Louisville community expressed support for the victims of the vandalism.

“WHAS 11 and WLKY both did a short segment of the vandalism,” she said. There was also a lot of support from social media, especially Twitter. There were so many tweets from so many different people trying to find out how they could help with the situation.”

Rose Chancy (11, MST), who also attended the clean up, was happy to see the Louisville community standing up against intolerance.

“It was very empowering seeing people of all faiths and ages come together and rise above the hostility that occurred,” she said. “I think it sent the message that Louisville will not stand for racism and will defend the compassion that unites us.”

Like many others, Chancy attended because of her own interest in social justice.

“I stay up-to-date on social justice, especially the injustice in our own city,” she said. “I have been involved in the interfaith community since I went to school at St. Francis of Assisi.”

Emilee McCubbins (12, HSU), who attended the clean up with Manual’s Y-Club, was glad to see everyone standing in solidarity with the Muslim community.

“My family has always fostered very prejudiced beliefs, and one of the most important values I try to uphold in myself is that of tolerance,” McCubbins said. “Standing in the crowd, I just felt like everyone there was standing in the sort of solidarity that only comes from open, caring individuals, and I am glad that Louisville fosters such a community.”

Louisville Mayor Greg Fischer came out to show his support, helping with the clean up and sharing photos from the event on social media.

“I was stunned with how great of a turn out we had at the clean up event,” Haq said. “Mayor Greg Fischer came, along with the President of Djibouti and the US Ambassador of Djibouti. They all gave short speeches on the vandalism and the overall unity in Louisville. There was an insanely diverse group of people present.”

At the event, community members of all races, genders, religions, and ages sung the national anthem, painted over the graffiti, and generally united in support of the Center.