Crimsons outlast Ballard in a thriller 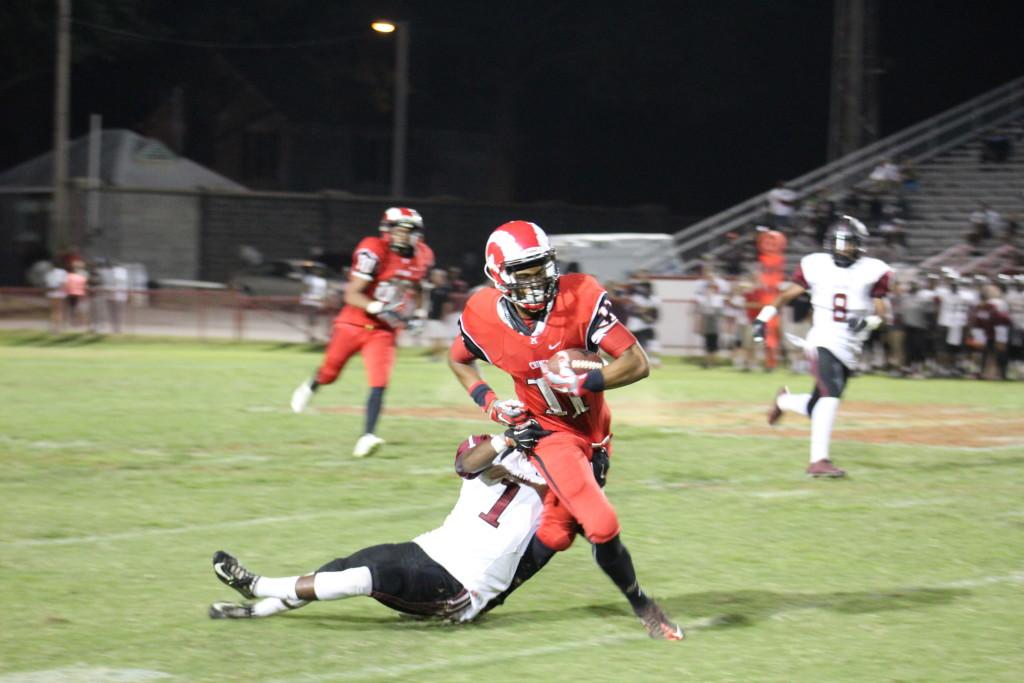 With 3:15 left in the ballgame, Manual Head Coach Oliver Lucas faced a tough decision. His Crimsons trailed Ballard 19-17 and were facing a fourth and seven on their own 19-yard line. Conventional wisdom would suggest that the Crimsons would punt the ball out of fear of giving the Bruins an extremely short field with so little time left; however, Lucas is not a conventional coach.

Instead of punting, Lucas made a gutsy decision and went for not only a first down, but for a home-run type play. So when quarterback Tim Comstock (12, #3) found Jailen Carter for a 46-yard gain, Lucas’ aggressive choice ended up being the deciding factor of the game.

“I saw that they had my number one receiver Jailen [Carter] covered one-on-one on the right side, and usually that’s a mismatch for him,” Comstock said. “So I just threw it up to him and knew he was going to catch it.”

Two plays later, running back Troy Henderson (10, #29) gashed through the middle of the Bruin defense for a 34-yard touchdown to cap the eight play, 99-yard drive to put Manual up 24-19 with 2:36 left in the fourth quarter.

“All of my lineman committed to their blocks and opened the hole for me to take the opportunity,” Henderson said.

However, Ballard did not go down easily. With 2:11 left in the game, Bruin quarterback Kyle Wolfe (11, #9) found Jordan Gunter (11, #11), who made a bobbling catch (after slipping and falling on his behind) for 31 yards to get to the Crimson 36-yard line. Five plays later, after Ballard had just converted on fourth down and four to keep the drive alive, Wolfe found Gunter again for what looked like a game-winning, 25-yard touchdown, but the pass was ruled incomplete. After a pass interference call against Bryce Cosby (11, #7), Ballard had three more chances to get into the endzone. But after Wolfe’s pass to tight end Jake Ramsey (12, #18) fell incomplete, the Crimsons had officially hung on to a 24-19 win.

“We needed this type of win,” Lucas said. “I always say we’ll take a sloppy win over a great loss any day.”

For the third straight year Ballard gave Manual all that they wanted—and more—and almost pulled off the upset.

Manual struck first when Reece West (12, #1) ran for a 12-yard touchdown to give Manual an early 7-0 lead just four minutes into the game. However, West seemed to injure his right hand after a 12-yard run early in the second quarter and did not return. In his absence, Andre Teague (11, #6) and Henderson filled the void for the Crimsons.

“Our running backs stepped up to the challenge,” Lucas said. “Andre Teague gave us a boost; he really just came in and ran hard. For us it comes down to will; we have to impose our will. That was the big difference.”

On the game, Teague ground out 59 yards on 13 carries and had a touchdown. Henderson paced Manual with 18 rushes for 127 yards and the game-winning score. Comstock also added 11 carries for 67 yards and a fumble. West had 31 yards on three rushes and a score before leaving.

“He’s [West] our brother,” Henderson said. “We know that he would have done the same thing for us. We took over; we told him, ‘You don’t have to worry about nothing because we got this.’”

But Ballard would eventually storm back. The Bruins got on the scoreboard when Jon Board (11, #52) picked off Comstock and ran for a touchdown. It was the first of four Comstock turnovers, including three interceptions, in the first half.

“I just wasn’t hitting the right people,” Comstock said. “I was nervous. I don’t know why, I’ve been through this before, but I just wasn’t going through my progressions. I was just too hyped. I got to calm down.”

After Chase Gavin (12, #44) blocked kicker Daniel Levine’s (12, #72) extra point, the Crimson lead was cut to one at 7-6. Gavin had a strong game for the Crimsons, as he recorded ten tackles, one tackle for a loss, 1/2 a sack and also forced and recovered a fumble.

“They [Ballard] follow a lot of tendencies and repeat a lot of the same things, so we were able to know what they were going to do,” Gavin said.

Manual had a trio of solid drives in the second quarter; however, the first two ended in turnovers and the third was derailed by penalties. On one drive, Manual had the ball inside the Bruin one-yard line, but Comstock fumbled the snap and Ballard recovered.

After the fumble, Lucas benched Comstock in favor of WIll Britt (11, #17) for the rest of the first half. In the first half Comstock completed just two of nine passes for nine yards and threw three interceptions, as well as the fumble.

“It just gave me some time to think about what I was doing wrong on the field, and I came back strong,” Comstock said.

After the fumble, Wolfe found Gunter for a 53-yard touchdown. Following a failed two-point conversion, the Bruins took a 12-7 lead into halftime. After Manual went three and out to start the second half, Bruins fullback Ben Mink (12, #22) ran for a five-yard score to give Ballard a 19-7 lead early in the third quarter.

The Crimsons finally answered when Teague rumbled for a 17-yard touchdown run with 1:14 left in the third quarter. After Nick Kopp’s (10, #9)  35-yard field goal with 7:48 left in the fourth quarter, Manual had cut the Ballard lead to two at 19-17. Manual then forced a Bruin punt to set up the game-winning drive.

This win improves Manual’s record to 4-0. As this was the first time that the Crimsons have been seriously challenged this season, Manual hopes that the experience of the Ballard game will help in the long run.

Even after being benched in the second quarter, Comstock still remains as Manual’s starting quarterback.

“Nothing’s changed,” Lucas said. “Number three [Comstock] is still our quarterback. We had some good plays out of Will Britt when he came in. We had to pull him [Comstock] out and let him think and refocus.”

On the game, Comstock completed six of 16 pass attempts for 84 yards and three interceptions. In his brief stint as the Manual quarterback, Britt completed just one of seven passes for 12 yards.

Eric Niemann (12, #84) lead the Crimson receiving corps with three receptions for 33 yards. Carter only had one catch, but it was the huge 46-yard reception on the fourth down play. Henderson, Matt Motley (10, #5) and West added a reception each for 12, six and three yards respectively.

Next Friday Manual will face Western in the annual homecoming game. Kickoff is scheduled for 7:30 p.m. at Manual Stadium.