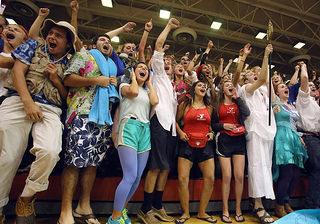 Manual’s Executive Council and its sponsor, Mr. Tyler Morris (Mathematics), changed the rules for nomination to the homecoming court this year.

According to the new guidelines, any club or team that had an account with Manual could nominate both a male and a female student to homecoming court by paying $25 per representative. These nominees were included on the homecoming ballot, which all students voted on Thursday during first block.

Morris’s model of representation was designed to reflect more diverse interests across the school.

“We want as many students as possible to be involved in homecoming,” Morris said. “We think that a great way we can do that is, instead of making it a popularity contest by class, we can have more students coming from all different clubs from around the school.”

Some students have been confused by the new guidelines regarding homecoming nomination.

“I don’t really understand what the new rules are,” Camden Huff (11, J&C), one of the Yearbook nominees for homecoming court, said. “It seems kind of confusing to me.”

Other club leaders have opted not to submit names for homecoming due to the cost.

“I and the other co-president did not think it necessary to spend $50 on something as simple as as homecoming court,” Janice Im (12, MST), FBLA co-president, said. “We thought it was inappropriate that our school is trying to make a profit from two people walking down a gym court.”

Homecoming King, Queen, Prince and Princess will be announced at the homecoming game on Sept. 25.