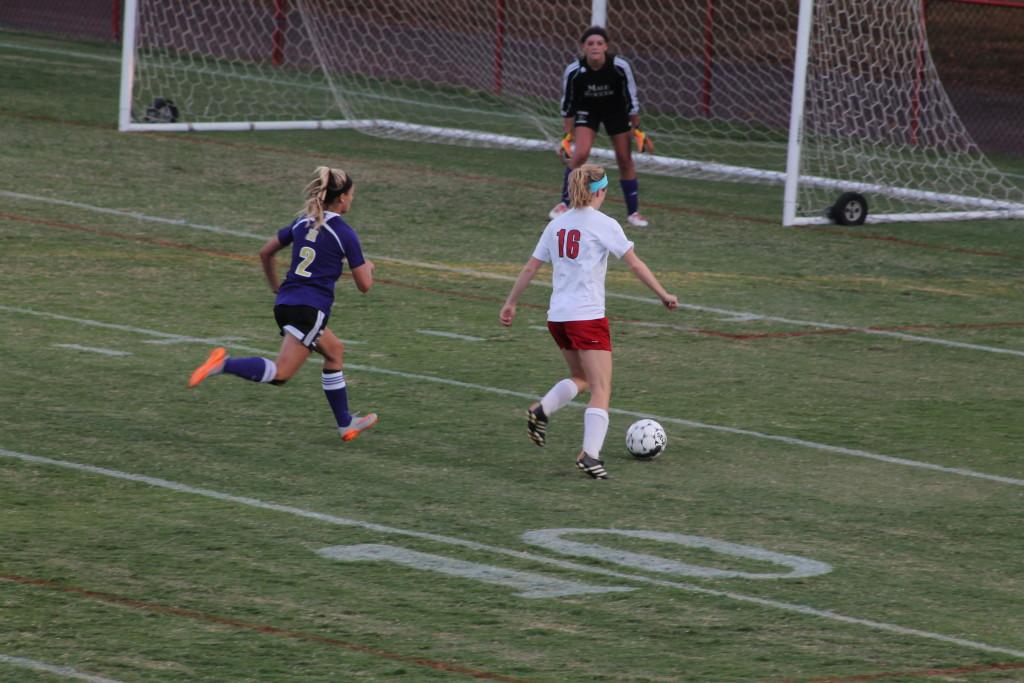 After 31 grueling minutes of intense play, Allison Whitfield (12, #28) broke free from her defender and sailed a shot right past the Male goalie to give the Manual girls’ soccer team their first point of the night.

In the end, the Crimsons defeated the Bulldogs 5-1. Manual’s offense initially had trouble moving the ball, but by the second half, they were putting up a major fight against Male’s defense. Whitfield and Emina Ekic (11, #10) kept the offense alive by focusing on passing the ball to open players, as opposed to trying to force it into the net.

The Crimsons’ well-rounded offense gave all of its players a chance to score at some point during the game. Emma Overstreet (12, #14), for instance, was able to get a goal off a corner kick from Ismene Vedder (12, #21) to begin a four-point scoring montage.

“We were nervous coming into this game tonight,” Whitfield said. “We knew we were going to have to come out here and play our very best to win, which we did tonight.”

Manual’s defense suffered compared to the offense. The Crimsons committed several fouls over the course of the game, and often weren’t fast enough to beat the Bulldog offense to the open ball. Several times during the game, goalie Ami Ballard (12, #45) was left alone to block a shot, which she did successfully all three times.

Male’s only point was scored off of a personal foul inside the goalie box from a loose ball push, which led to a penalty kick and the resulting goal.

Despite a lackluster performance by the defense, the team was generally satisfied with their performance overall.

“We came out strong because it was Male,” Ballard said. “We haven’t been playing our best lately, but tonight we did really well. It’s really nerve racking when playing goalie, because your teammates rely on you to stop the ball when it gets past them.”

According to Assistant Head Coach Sheri Kiser, the Crimsons stuck true to their typical style in the game against Male.

“We played our style of play, meaning that we passed the ball around and focused on finding the open player,” she said. “They played direct which can sometimes can hurt you, but because we played our style well, we were able to get more opportunities on goal.”