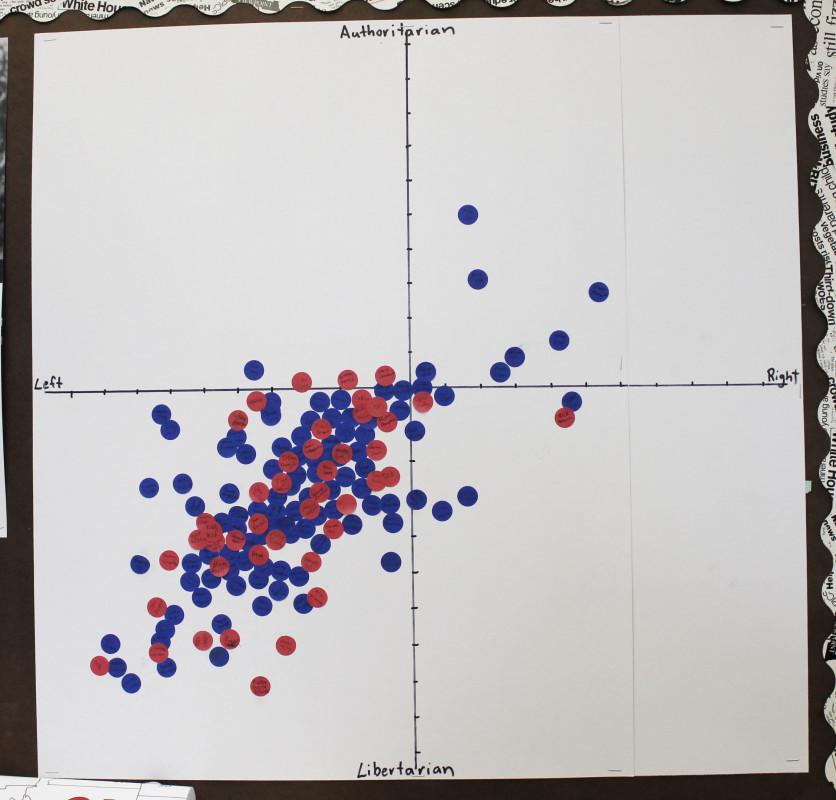 The graph used in Holman's class. Photo by Haeli Spears

During the Political Beliefs and Values unit of his AP Government and Politics class, Mr. Tim Holman (Social Studies) has his students take the Political Compass test. The compass is a questionnaire that asks users about a variety of political issues in order to determine (and then chart) their political persuasions. The test is largely a blunt instrument, but it does tell us a lot about how Manual as a community trends politically.

The data reveals that a strong majority of Manual students report beliefs that the instrument measures as liberal. Some significant conservative outliers exist, but these are few and far between. The density of the students polled doesn’t start to trail off until about (-6,-5),  although students liberal enough to fall under this category still substantially outnumber those who tested as conservative to any degree by well over a 2:1 ratio. With the exception of the Journalism and Communication magnet (J&C students surveyed reported scores at an average of (-4.54, -5.81), compared to an approximate average of (-2.47, -2.1) for other magnets), students’ magnet affiliation appeared to have very little correlation with their political views.

Although some may be quick to link this trend to the perceived notion that teachers are lacing their lectures with liberalism, Holman thinks other factors are likely at work.

“I think the faculty at Manual is actually going to be much more conservative than the student body,” he said. “We’re dealing with young people who are in art, journalism and science magnets. These are professions that are liberal by design.”

Andrew Valentine (12, MST) also agrees that the faculty has little to do with the student body’s leftward slant, but suspects that regression to the mean is inevitable.

“There’s no way I’m going to remain the ninth or 10th most conservative person in the graduating class,” Valentine said.  “The model actually views me as quite average for a democratic voter. People just don’t stay that liberal as they get older.”

AP Government and Politics student Urooj Nasim (12, MST) thinks that the Manual community is inherently liberal because the decision to attend a magnet school is a progressive one.

“The decision to come here asserts a change from the status quo of the student’s home school,” Nasim said. “Coming to Manual implies a more welcoming attitude towards change.”

In a lot of ways these results aren’t surprising–a 2012 yearbook poll found that a combined 75% of the student population supported either Barack Obama or Green Party candidate Jill Stein. It should be noted, however, that some potential sources of selection bias exist. The data is only taken from seniors that enroll in this high level government course, meaning that the students sampled are among the school’s most politically active.

Regardless of the results themselves, Holman said that the Political Compass is a useful classroom tool.

“I think the activity is a great icebreaker,” he said. “It makes students own their views a little bit more, and they usually become more open to talk about politics in class.”