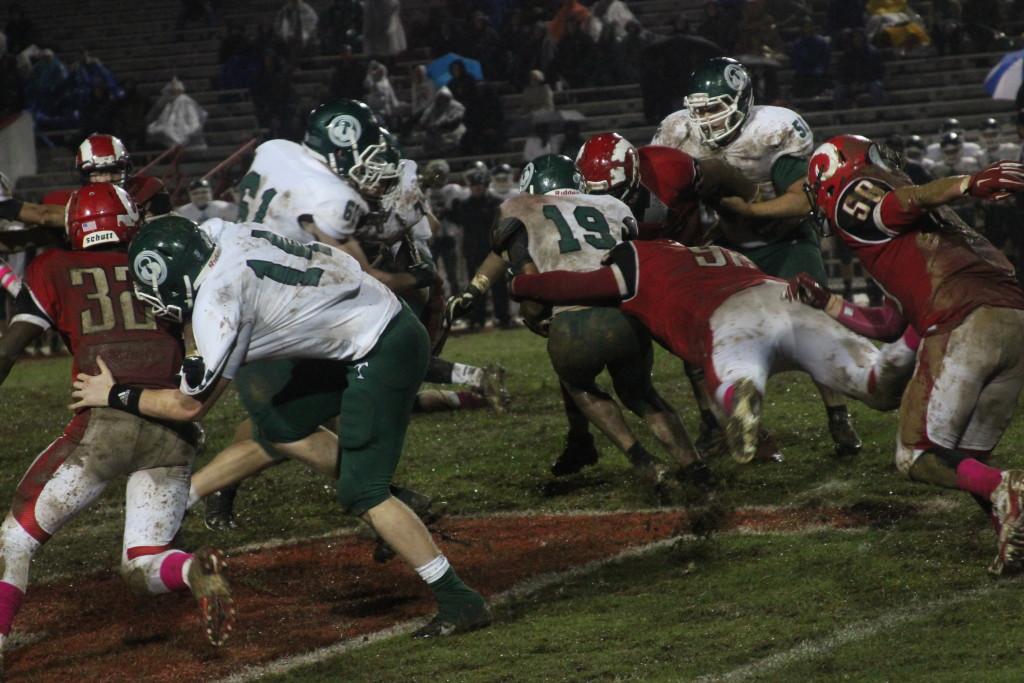 The glory days of The Old Rivalry are over. The years of over 20,000 people crowding into Manual Stadium to see the top two teams in Kentucky battle on Thanksgiving are not returning.

For the better part of 40 years,  the biggest high school football game in Kentucky has been played on the first Friday in October, when Saint Xavier faces off against Trinity. This is mainly due to the simple fact that Trinity and St. X have surpassed Male and Manual on the field.

Since 1959, when the Kentucky High School Athletic Association (KHSAA) started naming official state champions, the Tigers and the Shamrocks have combined for 35 state titles. Though it’s hard to objectively pick out state champs before 1959, the Crimsons and the Bulldogs were widely considered to be the best of class in Kentucky. Male and Manual had 12 undefeated seasons before 1959, and both won multiple unofficial national championships. However, since 1959, Male and Manual have combined for just eight state championships, with just three titles coming since 1966 (Male in 1993, 1998 and 2000).

Tonight, approximately 35,000 fans will travel to Papa John’s Cardinal Stadium to watch the Tigers and the Shamrocks renew their rivalry and in the most attended high school football game of the year; however, it will not be the most important game of the regular season. That honor will be bestowed upon Manual and Male when they face off in the 123rd edition of The Old Rivalry on Oct. 23 at Manual Stadium.

Over the past three years, Male and Manual have seen a football renaissance. The Bulldogs and the Crimsons have each enjoyed great success with their current coaches. Since Head Coach Chris Wolfe came to Male in 2010, the Bulldogs have won 50 out of 70 games–that’s an impressive 72 percent. Male also won a regional title in 2013 and enjoyed an undefeated regular season in 2014.

“We have a process of developing good players, and having a system offensively and defensively that fits the players,” Wolfe said.

Head Coach Oliver Lucas has enjoyed a similar success at Manual since being hired prior to the 2011 season. Under Lucas’ guidance, the Crimsons have enjoyed a 35-17 record, for a winning percentage just over 67 percent.

“I give my staff all of the glory and the credit, because we are not afforded the same luxury but we are working our butts off,” Lucas said. “That’s why we’re able to be competitive and be successful.”

Over the past three years, Male and Manual have had increasing success against St. X and Trinity. After not losing to a JCPS opponent between 2004 and 2012, the Shamrocks and the Tigers have split the 14 meetings with Crimsons and the Bulldogs since 2013. Male has enjoyed almost all of the success, winning seven of their last eight meetings with the two Catholic powerhouses, including a 42-13 thumping of the Shamrocks on their Sept. 27 game this year.

Manual, on the other hand, has yet to get over the hump against either school since beating Trinity in 2004; however, the Crimsons have put up a worthy fight over the past few years. In 2013, a missed extra point and a last second Tiger touchdown gave St. X a 21-20 win over Manual. In the 2014 playoffs, the Tigers escaped Manual with a 12-7 victory after a bizarre play in which Antonio Hassell (12, #19) intercepted a pass in the third quarter, only to fumble and have St. X’s Blake Roshkowski (11, #10) recover the ball and run 56 yards for the deciding Tiger touchdown.

“We have closed the gap; we just haven’t gotten over the hurdle like Male has done,” Lucas said. “Coach Wolfe has done an outstanding job in regards of being able to beat Trinity and St. X.”

Even the capacity to keep close with the Tigers and the Shamrocks is a huge sign that the Crimsons, along with Male, continue to close the gap. Between 2007 and 2012, Manual lost their 12 games against St. X and Trinity by an average score of 32 points.

What keeps Manual relevant in the upper-echelons of Kentucky football is the fact that the Crimsons have just barely trailed St. X and Trinity, and, more importantly, have been able to win four of the last five and six of the last eight games against Male, the team that has been able to get over the hump against the Catholic schools.

The Crimsons and the Bulldogs have also produced more entertaining games then St. X and Trinity. In the last two years, while St. X and Trinity’s two regular season games ended in easy double-digit victories, Male and Manual have played in a pair of thrillers. In 2013, Manual escaped Male 32-29 when the Crimsons needed a goal-line stand in the final seconds to escape the Bulldogs. In 2014, Male running back Ellis Cain (Class of 2015) ran for a 44 yard touchdown with three minutes left, leading the Bulldogs a 28-21 victory.

“I’m biased about it, but I think that our games have been a whole lot better,” Wolfe said. “It’s been more competitive than their rivalry; we play it at a high school stadium that you can’t fit any more people inside, so I think that the atmosphere is better than the St. X/Trinity rivalry. I don’t think that it takes a back seat–we’ve had it longer, and it’s one of the best rivalries in the nation.”

So, while over 35,000 people will watch the Tigers and the Shamrocks take the field tonight in the anticipated match-up of the season, they ought not forget what will be, by far, the most important game–Male’s Oct. 23 face-off against the Crimsons at Manual Stadium.

All stats courtesy of Maxpreps, and are up to date as of October 1.