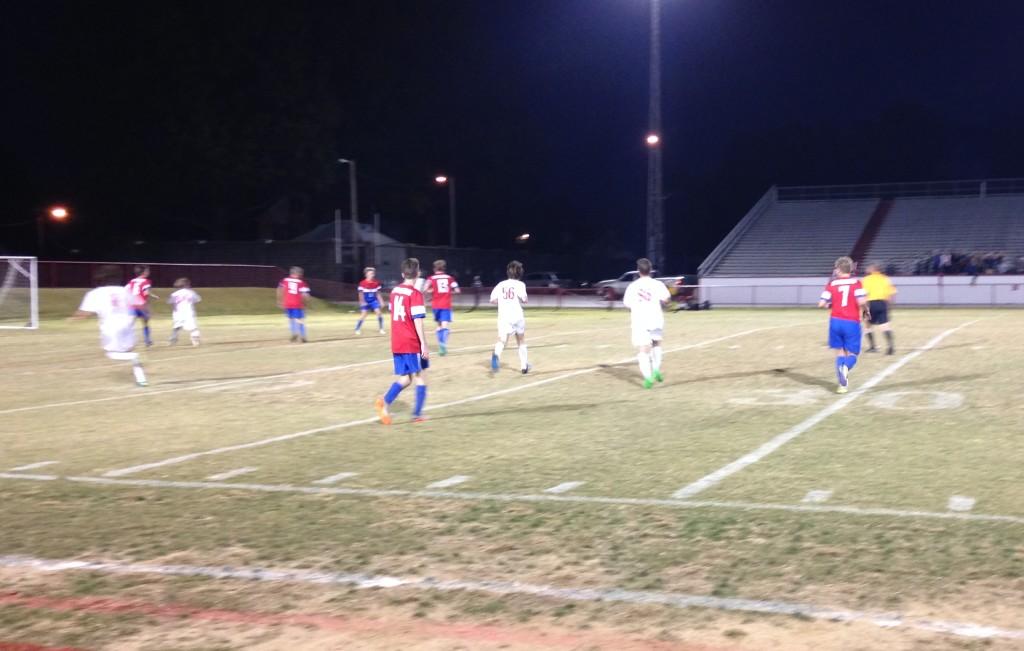 What happens when the high-powered Crimson boys’ soccer team meets a defense that can contend with their every step?  The answer can be found in the outcome of last night’s game: a narrow 1-0 victory against Christian Academy of Louisville (CAL) in the first round of the regional tournament. Solid defensive play by CAL and the absence of key striker Dylan Barth (11, #9) due to illness rendered Manual unable to convert on wide-open shots on goal.

“I thought the other team played us really well,” Head Coach Bob Ramsey said. “We played them about a month ago, and the game was 2-0. Our defense didn’t give them that many chances, but we didn’t convert well on our second time shots.”

Manual’s offense struggled on second chance shots. Henry Jelsma (10, #54), for example, missed a loosely contended shot on goal because a CAL defender got in front of it at last moment.  This same play happened twice throughout the duration of the game.  Mistakes in Manual’s offense were apparent throughout the game, with several shots missing the target.

“We had to keep plugging away,” Riley Hook (12, #8) said. “They were stopping our shots pretty easily, but eventually we put one away.”

The Crimson offense yet again relied heavily on their ability to pass the ball and make sharp cuts to out-hustle their opponents.

“Our team is very fit compared to most teams so we have the ability to wear them down as the game goes on,” Hook said.

Manual’s one goal came from Nick Zehnder (11, #10), who capitalized off of a free kick late in the second half when Manual needed it most. This goal put the pressure on the Centurions to push the ball forward, while also freeing up Manual’s offense to help keep CAL from tying the game up.

“That goal put us through to play the Shamrocks,” Zehnder said. “Our defense let a few slip by but we made it through and won the game.”

The most intense part of the game came in the last 35 seconds, as CAL desperately tried to argue for the running clock to be stopped during every throw. The Crimsons, however, were able to successfully run out the clock.

“The emotion was pretty crazy,” Hook said. “We were doing a lot of yelling at the other team and at the refs but that’s just how a close game goes.”

Manual will play the Trinity Shamrocks Thursday night at 5:30 p.m. at Male Stadium.