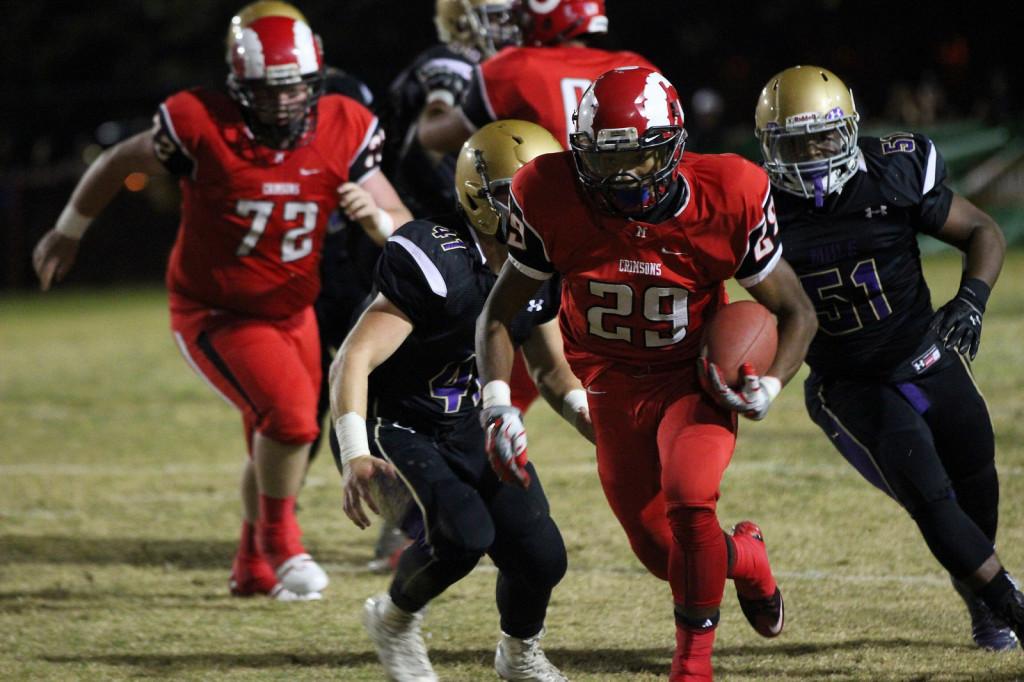 Except it didn’t. Unable to take advantage of the shift in momentum to make the game at least close, the Crimsons could not add on more points before the end of the first half, and Male promptly stole back their rhythm early in the third quarter.

Quarterback Tim Comstock (12, #3) executed a two-minute drill to set up a 44 yard field goal attempt in the waning seconds of the first half; however, Chris Roussell’s kick, while on target, landed about a yard short of the goalpost.

“That field goal would have really helped us,” Comstock said. “It would have given us some more momentum coming in[to the second half].”

This was not the only time Manual couldn’t capitalize on scoring chances in the first half. On Manual’s second drive of the game, running back Troy Henderson (10, #29) thought he had a 58 yard touchdown run on a fourth down play to tie the game at seven; however, the play was called back due to a holding call and the Crimsons were forced to punt. Male scored a touchdown on the ensuing drive.

“What really killed us was when Troy ran that touchdown and they called it back for holding,” Comstock said. “Penalties have been killing us for the last three, four weeks. We can’t have penalties. We shouldn’t be doing that stuff; we just need to stop being anxious.”

On that Bulldog drive that followed, Cosby dropped what looked like an easy pick-six. It was a play that mirrored the pick-six he would later have with 4:50 left in the second quarter.

“We were just shooting ourselves in the foot,” Cosby said. “The whole first quarter, we were doing stuff that wasn’t like us as a team. It was not Manual football. A great team like Male capitalizes on all of the opportunities that we gave them.”

The Crimsons still had a shot going into the second half, and Manual remained down 21-7 after forcing two Bulldog punts. With 3:45 left in the third quarter, the Crimsons had the ball with a chance to make it a one score game. But on the second play of the drive, Comstock overthrew Carter, and Male’s Demetrius Holt (12, #4) picked off the pass and returned the ball to the Crimson 18. On the next play, Male quarterback Hayden Shelton (12, #15) found Ethan Britt (12, #7) for a touchdown to give the Bulldogs a commanding 21 point lead.

With Manual completely unable to recover, the Bulldog defense would force two more Crimson turnovers on Manual’s next two drives. Male’s offense pushed the lead out to the eventual final score of 43-7.

“The defense shut them out the whole game, and that really gave the offense a chance to go down and score and get a running clock,” Shelton said.

“We have to go back to the drawing board and look at what we’re doing, and really work to hone in on it,” Manual Head Coach Oliver Lucas said. “Right now we’re not executing. If we start executing, we can come out okay.”

The Bulldog offense gets a lot of accolades, but it was the Male defense that deserves a lot of the credit for the victory.

“Our defense played excellent,” Male defensive end Marcus Davis (12, #59) said. “We had a few mistakes, but we fixed them.”

Male held Manual to just 92 yards in the ballgame, and just one yard in the second half.

“They had a very good scheme on us,” Comstock said. “We just need to execute and get open, and I just need to hit the receivers that are open and not get too quick in my reads; I just have to play relaxed.”

After scoring touchdowns on their first three drives, the Male offense proved why many consider it to be the best in the state. Male dominated time of possession and was able to wear down an injury prone but stingy Crimson defense.

“A defense can only play so long, especially against a great offense,” Lucas said. “A great offense will trump a great defense if the defense has to be out there for an extended amount of time. So we’ve got to look at that and see how we can help.”

“We ran the ball really well and that helped us get play-action later in the game,” Shelton said.

Manual will have to hit the reset button after being beaten down by their arch-rivals. The Crimsons don’t have much time to regroup, as they will wrap up the regular season next Friday at Eastern before preparing for the Kentucky state playoffs, which start on Nov. 6.

“We’re not going to sweat over this loss,” Cosby said. “Do we wish that we could have had it? Yeah, of course, it’s a huge rivalry game, but we got the rest of the season to look forward to, we have the playoffs coming up, so that’s what we have to focus on now.”