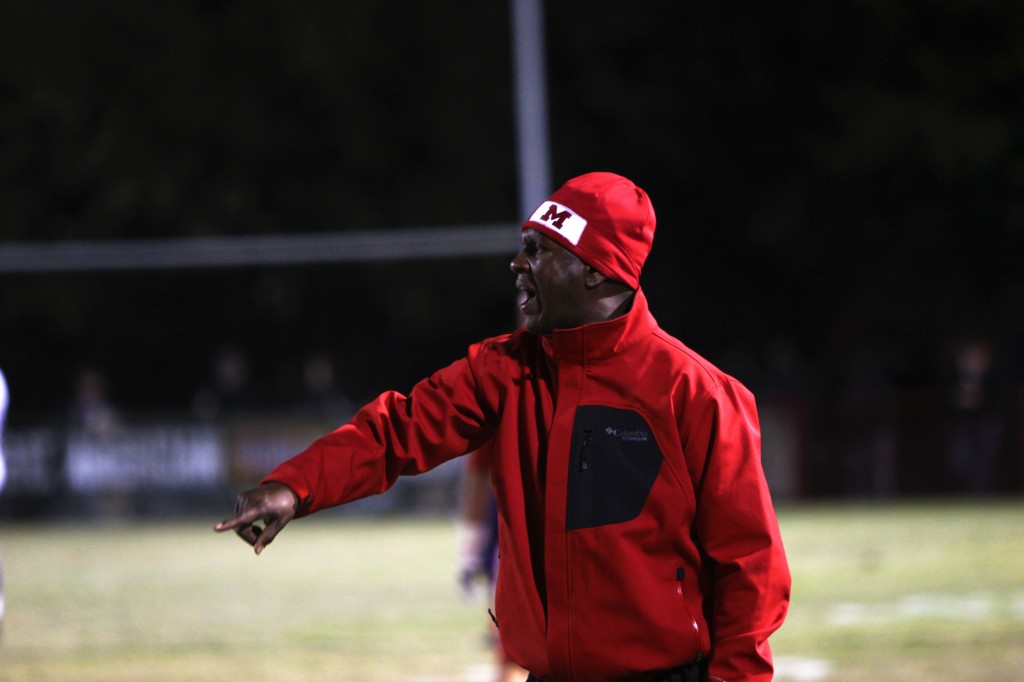 Manual football Head Coach Dr. Oliver Lucas (Science) announced Monday that he is stepping down from the helm of the Crimson football program after this season’s playoffs are complete.

“[I’ve] accomplished enough where the ceiling won’t let you go any higher,” Lucas said. “[I’m] stepping down because timing is everything, and it allows the school an opportunity to replace [me] in a timely manner that is fair to the program and the school. Also it allows me an opportunity to be available for other opportunities that may arise.”

Lucas, who was initially hired prior to the 2010 season, said that he believes the Manual football program needs to move in a slightly different strategic direction going forward.

“The next step for Manual is to be able to go a little bit in a different direction,” Lucas said. “I don’t know if that’s me, because I think [Principal] Mayes has to have his guy, and that’s the uniqueness of it. I think every administrator has to have his person.”

During his tenure, Lucas was able to put Manual back on the map in Kentucky; however, he could never get over the hump against St. X and Trinity, both of which are considered to be the best of class in the state. Against all teams except for the Catholic powerhouses, Manual boasted an outstanding 44-9 record under Lucas’ tenure. Against the Shamrocks and the Tigers, however, Lucas’ Crimsons were winless in 15 attempts, bringing the overall record to 44-24. The pressing goal for the new head coach will to build a program that can best these schools at least occasionally.

“That’s the next step,” Lucas said. “You’d have to have certain components in place and backing in order to [beat St. X or Trinity]. I’ve always argued that Manual is a school of excellence. And if you’re a school of excellence, you want excellence in everything that you do. And that’s why, for me, I think that Manual, they have so much more to do. There’s a ceiling when it comes to athletics at Manual. There’s a ceiling, and I think the ceiling can be much higher, that’s all.”

Lucas does believe that Manual will eventually be able get over the hump and have success against the Catholic powers.

“Everything is possible,” he said. “I believe that Mr. Mayes is going to find the best person that he feels comfortable with, and it’ll be his guy that he’ll be bringing in. I’m sure everyone will get behind him, as they should, just for the success Manual needs and to make sure Manual continues in its winning ways.”

“We are appreciative to Dr. Oliver Lucas for six exceptional years as our head football coach,” Zuberer wrote. “His guidance and leadership have helped reestablish Manual as one of the state’s top football programs. As the playoffs are set to begin, our present focus is for a successful and long post-season run led by our current coaching staff. With that in mind, the process of hiring a new coach will begin at the conclusion of the 2015 season.”

Lucas will still coach the Crimsons for the remainder of the playoffs, which will kickoff Friday night at Ballard. Lucas said that he does not think the announcement of his resignation will affect the team’s performance.

“I think the kids will rally and play hard for me,” he said. “Nothing has changed other than the fact that I’m going to step down at the end of the playoffs. Hopefully that won’t come until sometime in December.”

After Manual’s playoff run, Lucas will seek other job opportunities in the state of Kentucky.

“I will see how the good Lord presents opportunities for me, then I’ll examine those and I’ll look at it,” he said. “It’s time for me to take on new challenges. I like to think that I’m a program builder, and so I look for opportunities to do those things.”