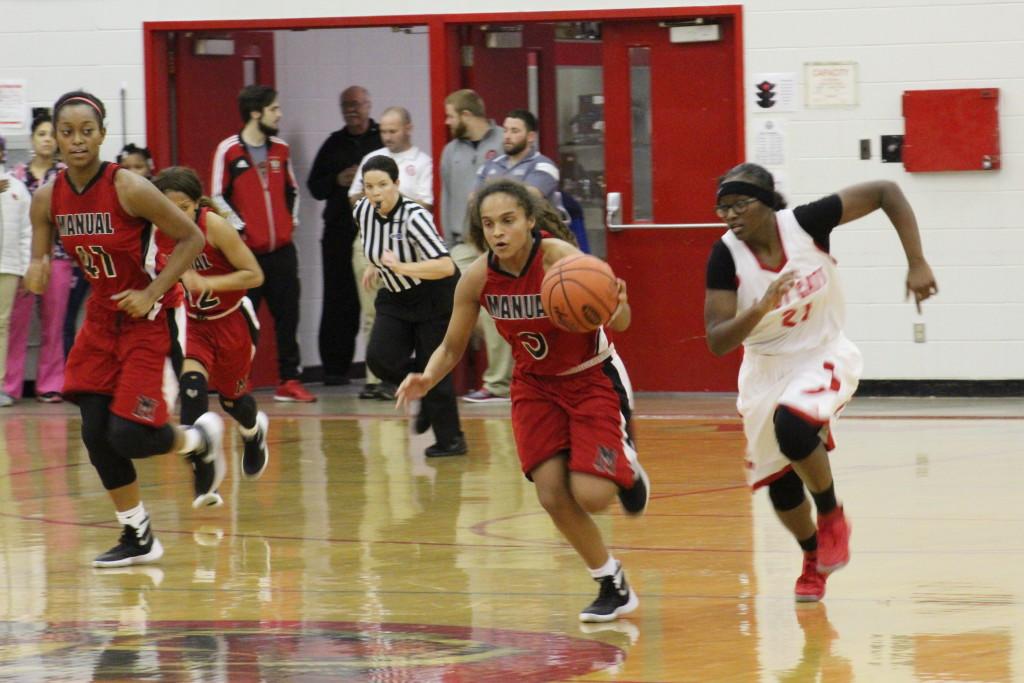 AMy Ballard (9, #3) leads the Lady Crimsons in transition on one of their many fast breaks. Photo by Kate Hatter.

The Lady Crimsons had one thing the Waggener Lady Cats did not: energy. It was abundantly evident in nearly every Manual possession that the girls were playing with a blistering intensity at a breakneck pace.

Whether it was Tonysha Curry (11, #23) lunging for a steal, Tyonne Howard (10, #12) leaping for an offensive rebound, or Roncayle Hunter (12, #15) sprinting down the court on a fast break, there is no denying that the Lady Crimsons were playing with a vigor that Waggener could not match. These intangibles, combined with a stifling defensive showing, are what propelled the Lady Crimsons to a 74-26 rout of the Waggener Wildcats during their season opener.

“We were just super excited to play, and I think that carried onto the court,” China Brown (12, #34) said. “I just think our that enthusiasm and the way we bought into each other and the way we played for each other. We were just like, ‘They’re not going to score on us,’ and since that was our mentality and our mindset it just happened, it just came out.”

The tone for the game was set almost instantaneously after the tip-off. Curry barreled into the paint for an easy layup and a quick two points. On the next possession, she again ventured into the paint against much larger defenders, this time for an offensive rebound and a put-back score. By the time she checked out in the first quarter she had already racked up at least two steals and set the breakneck pace at which the Lady Crimsons played for the rest of the game. The spark that Curry provided would go on to ignite the Lady Crimsons to a blistering 23-3 first quarter.

“[Our biggest strength] was our energy level overall and that converting into defense,” Head Coach Jeff Sparks (Social Studies) said. “Just our focus on that end of the floor.”

Manual was able to build up a sizable lead so quickly due in large part to their ability to let their defense fuel their offense, run their full-court defense, get steals, and get out into transition. The Lady Crimsons’ roster was a nightmarish matchup for Waggener due to both their size and athleticism. Not only were they creating high-quality shots of their own on the break; they were also keeping the ball out of Waggener’s hands, taking away any chances the Lady Cats had to chip away at the deficit.

“We pushed the ball every time we got it,” Hunter said. “[We] pressed it up the court and got layups, a lot of layups.”

Manual’s superior length allowed them to constantly break up passing lanes and trap Waggener ball handlers, while their athleticism was perfectly suited for outrunning Waggener defenders and, by utilizing unselfish play and crisp passes, turning those steals into fast break buckets. This was especially evident in the first quarter, when the Lady Crimsons managed to steal two Waggener inbounds passes and score off of them during back-to-back possessions.

That ability to cut-off passing lanes was also on full-display in the second quarter, when Manual managed to utilize back-to-back steals to push their lead to 34-10. The same length the team utilized to create turnovers was also pivotal in establishing the Lady Crimsons’ dominance on the boards early on, which they used to monopolize second-chance points, even further preventing Waggener from possessions that could chip away at the deficit. With their defensive and transition games firmly ensconced, the Crimsons managed to hold Waggener to 8 points in the second quarter for a total of 12 in the half, giving Manual a 43-12 lead by the start of the third quarter.

“We’ve spent a lot of time in the preseason just trying to push the pace, especially defensively, bring a lot of pressure; we’re fast enough and athletic enough to and we were able to get it done against this team tonight,” Sparks said.

“Once we locked down and got in our mindset that we were going to do defense, the offensive transition came so easily,” Brown said. “We were just like, throwing the ball up and looking for passes we don’t usually look for. Today was a big improvement in our transition game and it showed on the scoreboard.”

By the start of the third quarter, the Waggener Lady Cats simply looked like they were out of gas, giving the Lady Crimsons ample room to open up on them. Waggener’s inability to stop the break, a series of three more consecutive fast breaks that resulted in another 6-0 Manual run, and the lack of defensive coverage on freshman Nila Blackford (9, #41) led the Lady Crimsons to a 59-16 lead by the end of the third, and allowed Manual  to eventually cruise to a 74-26 dismantlement of the Lady Cats during the season opener.

“It feels good,” Sparks said. “I think it gives us some confidence, shows us some things that we’re doing well, and things to still improve on as we progress through the season.

While this game was a strong showing for the Lady Crimsons, the team still sees a number of areas they can improve in.

“I think we can continue to improve on finishing around the basket,” Sparks said. “We had some good opportunities, and we’ll finish. And a little more patience on the offensive end and just learning what teams are giving us and how to take advantage of those opportunities.”

“I think our communication on defense and offense, and being aware of the court and our settings,” Hunter said. Brown echoed this sentiment, citing  the team’s compatibility and playing as a team as areas to improve upon.

The Lady Crimsons will have to fix these faults quickly, as they’re set to take on Ballard, their second of three games this week,  at Ballard High School on Dec. 4 at six p.m.

“I’m excited to start the year off with a win and I’m looking forward to the next time we get to play,” Sparks said.