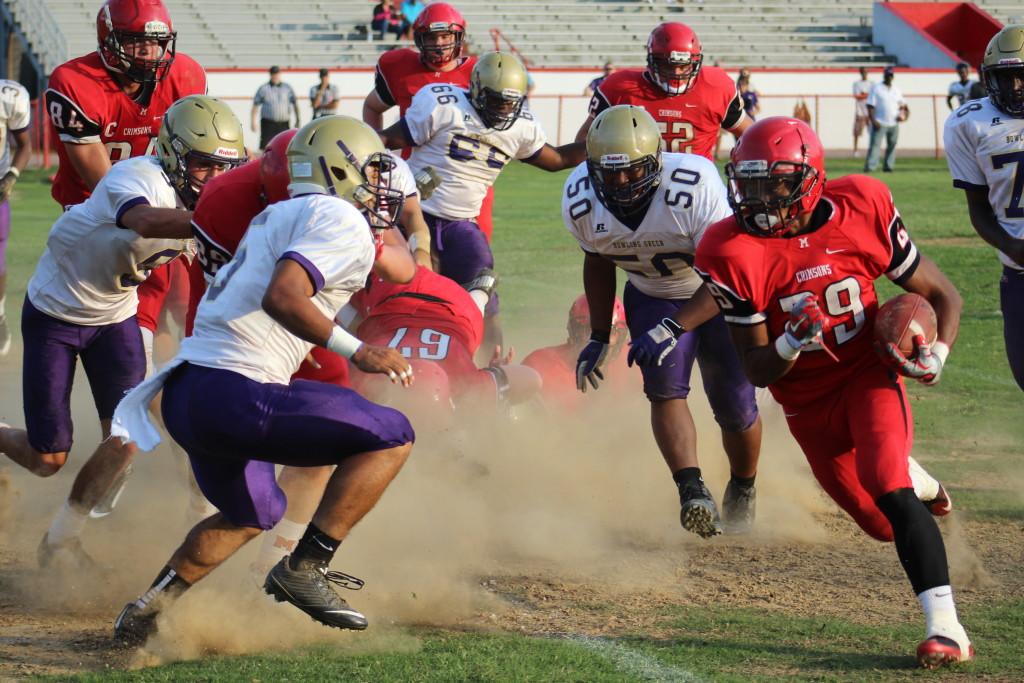 Running back Troy Henderson (10, #29) rushes for a first down against Bowling Green. Photo by Kate Hatter

Zuberer’s official statement on the new hire was as follows:

“It is with great pride and excitement that we introduce Scott Carmony as the 35th coach in Manual’s illustrious 123 year football history. Coach Carmony comes to us from Butler High School, not only as a football coach, but also an outstanding educator. Coach Carmony has embraced Manual and our tradition of excellence in all areas, committed to the all around development of our students, both in the classroom and on the field. We are extremely excited about the future of Manual Football under his leadership.”

Carmony was an assistant coach at Manual under current principal Jerry Mays from 1997-99. His personal connections with Mays and Zuberer is one of the reasons that he was considered for the job.

“I have known Mr. Mays before from when he was the head coach there [at Manual] and I worked for him and I know Mr. Zuberer because he coached my cousin in basketball, so there was a connection there,” Carmony said.

However, the main reason that Carmony was hired was for his success on the field. Carmony lead Butler to the state-semifinals in Class 3-A in 2011, and was nominated for the Associated Press Kentucky High School Coach of the Year award in 2011. Carmony was also named District Coach of the Year by the Kentucky Football Coaches Association in 2001, 2008 and 2009. In all, Carmony has coached in Jefferson County for 11 years.

“There is no substitute for experience, the longer you get down the road the better equipped you are to deal with the things that come your way, and that’s no different here,” Carmony said. “We just hope to learn and grow and get better along the way.”

Carmony replaces former head coach Oliver Lucas, who stepped down after the 2015 playoffs. Lucas finished with a 45-25 record at Manual, including a 4-3 record against rival Male.

“Obviously, it’s very special,” Carmony said. You don’t have to be directly involved in it to know that. It’s just one of those unique things around the country, and that’s just really neat to be a part of; it’s something that I really look forward to delving into when it comes.”

However, Carmony’s biggest challenge will be to continue to compete Catholic school powers Saint Xavier and Trinity, and occasionally beat them. Lucas was 0-15 against the Catholic powers, and Manual hasn’t defeated either team since 2004.

“Understand first that nobody has beaten those teams, except Male, so that’s just not unique to Manual,” Carmony said. “As far as what’s happened to Manual in the past few years, I really don’t look at that. We’re going to do what we’re going to do; we just keep our noses down and grind away, and we work at getting better every day, every week, from game to game, and from year to year. If you do that, good things will happen.”

Since stepping down from the head coaching position at Butler in 2012, Carmony has been out of coaching; however, Carmony said, “That’s a non-issue.”

Carmony takes over a Manual squad that has won nine games each of the past two seasons. Carmony wants to hit the ground running with his new team.

“We’re going to get to work as quick as we can,” Carmony said. “I’m in the process of hiring staff right now. I’m going to meet the players as quickly as I can, I don’t have a date knocked out for all that stuff yet. We’ll do as much as we can up until Christmas, and then when we get back from Christmas we’ll get up and going in the weight room, and planning for spring/summer schedule.”