Manual falls to Trinity in a back-and-forth battle 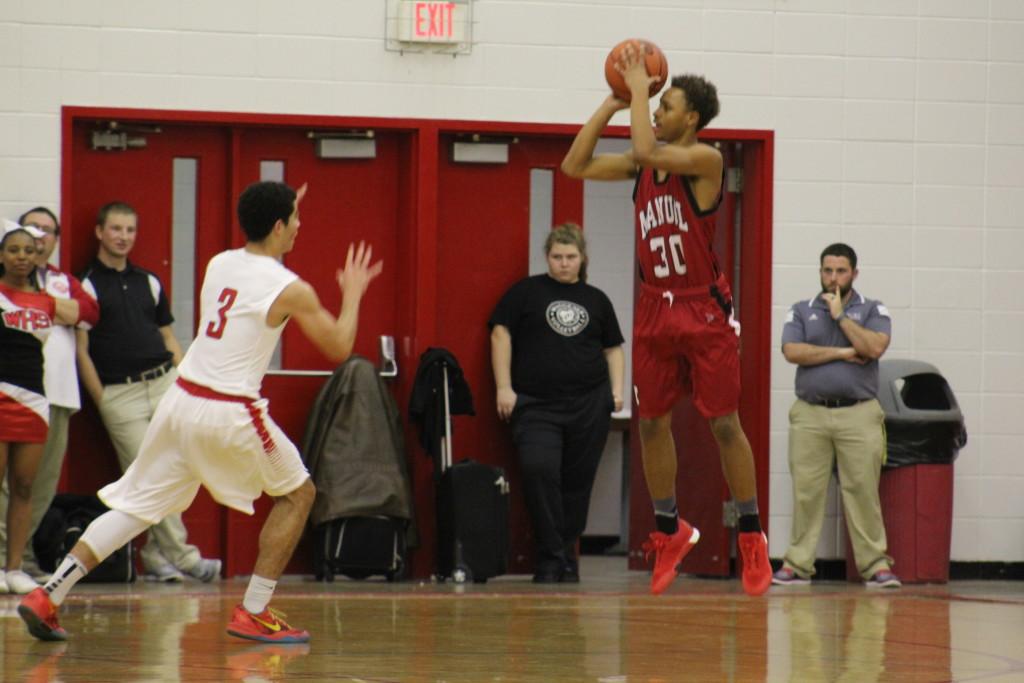 With just under two minutes left in the third quarter, Manual forward Eric Niemann (12, #33) stripped the ball from Trinity guard Jacob King (#1), and then ran in for an easy layup and a foul to cut the Shamrock lead to five at 42-37. The play capped an 8-2 Crimson run that looked like it would set up a wild ride to the finish line; however, Manual would never get any closer. In what had been a game of runs, Trinity used a 15-2 knockout blow starting at the end of the third quarter and continuing into the start of the fourth quarter to put the game out of reach as Manual fell to the Shamrocks 64-54.

“There are still times that we aren’t recognizing some things, and that’s because we’re still inexperienced right now, but we’re learning every game,” Manual Head Coach Jimmy Just (Math) said. “The hope is that we will make up for a lot of these mistakes if we play with a higher energy. So if we make some mistakes, we can come back and fix them by playing harder all the time.”

Manual started the game hitting on all cylinders as the Crimsons used a 14-0 run to take a 14-3 lead after one quarter. The Crimsons had locked down the sharp-shooting Shamrocks with high energy defense, and it looked like Manual was going to run Trinity right out of their own gym early in the ballgame.

“We came out with all kinds of energy,” Just said. “We were chasing balls and we were rebounding. We were not sitting back and watching other people play; everybody was very engaged and involved in the game. It’s hard to maintain that, and obviously we didn’t maintain that; it just shows these guys what they are capable of doing when we come out and play with that kind of energy.”

“We were just focused on the defensive end,” Niemann, who lead Manual with eight first quarter points, said. “The defense always sparks our offense, and that’s what we went away from the rest of the game. We lost our focus on the defensive end and they were getting easy buckets, and they started getting momentum. In the first quarter, we were stopping them, and we had all the momentum.”

In the second quarter Trinity slowly began to take over the game as the Shamrocks caught fire from behind the three point line. Three straight threes caused a 9-2 Shamrock run which got Trinity within three at 20-17 midway through the second quarter. After King, who finished with 20 points and nine assists, hit a layup, the Rocks had their first lead since the beginning of the game and eventually took a 31-27 halftime lead. In all, Trinity outscored Manual 28-13 in the second quarter.

The Trinity comeback shifted momentum and energy levels towards the Shamrock bench for the rest of the game.

“In the locker room during halftime, I could tell that our energy level wasn’t as strong as it was earlier, and our energy just wasn’t on par with them in the second half,” Marquis McClendon (12, #3) said.

At the start of the third quarter, Trinity continued to shoot the lights out. The Shamrocks used a 9-2 run in the first 65 seconds of the second half to quickly open up an eleven point advantage.

“We just lost focused and weren’t playing hard in the beginning of the second half,” Niemann said. “They started knocking down shots. They were getting open looks all day and momentum shifted there.”

Even after Manual fought back to get within five, Trinity answered with its game clinching run to cruise to victory.

“Our second quarter was not very good defensively,” Just said. “In the third quarter we started out flat and then we picked it up from there a little bit. We can’t have those kind of drop offs to be the kind of team that we want to be.”

Just wants to see a more consistent effort from his team.

“This team can play with anybody that they want to play with. We just got to have more consistency, and mainly that starts with consistent effort, and that’s something that we can control,” Just said. “We’ll be alright, we just got to find ways to keep it positive and keep playing hard; we’ll try some things to figure that out.”

The loss comes at the end of what has been an absolutely grueling start to the season for Manual (5-2). The Crimsons opened the season with seven games in just 11 days, three of them against the top three teams in the region: an overtime win at Waggener, and close losses to Ballard and Trinity.

Manual believes that the tough opening slate will do nothing but help prepare the young Crimsons for the stretch run of the regional tournament.

“It gets us prepared because we know who we got to beat,” Niemann said. “Waggener, Trinity and Ballard are the top three teams in our region, those are the teams that we got to beat to go to Rupp. We feel like we’re better than them, so we just got to go reach that potential.”

The Crimsons will go into winter break with the Best in Hoops tournament this weekend. Niemann hopes that the time off school will help the team bond.

“We’re going to be bonding over this time,” Niemann said. “We got three games in three days this weekend, so it’s just a time to get close and try to go out and win these tournaments.”

The Best in Hoops tournament will take place Friday, December 18 through Sunday, December 20 in Oldham County.