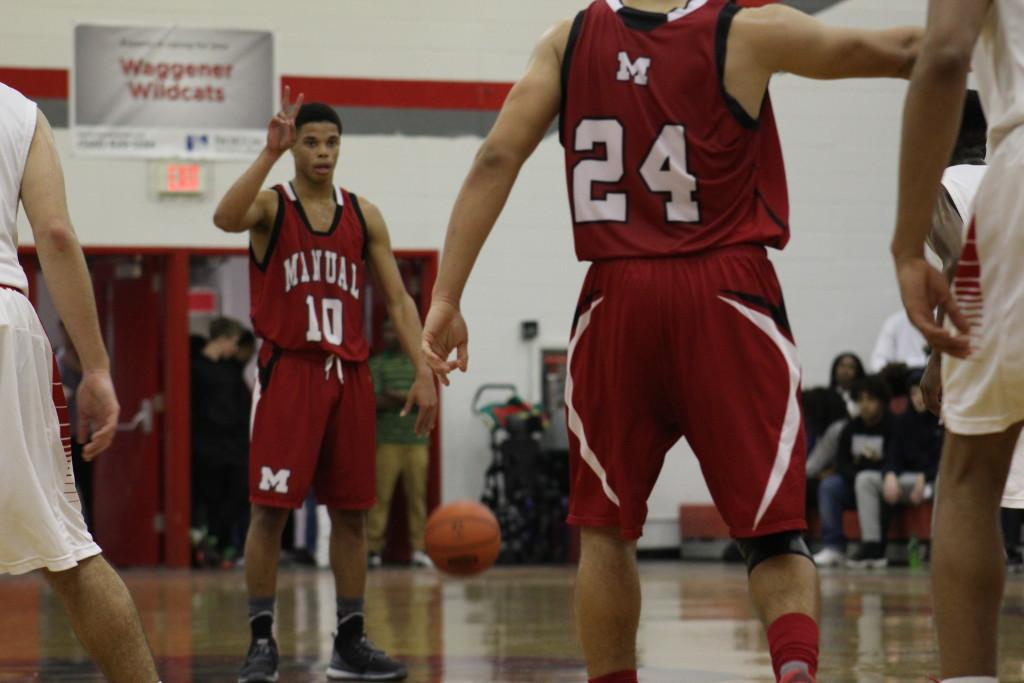 In what was a foul fest of a fourth quarter, the Manual boy’s basketball team hit enough free throws to survive against Lexington Catholic to advance to the finals of the Best in Hoops tournament.

In a quarter in which Manual only had one made field goal, the Crimsons hit 16 free throws in the final eight minutes to secure a 66-62 victory against the Knights.

After Lexington Catholic’s Luke Johnson (11, #10) hit about a 30 foot three pointer, and then a pair of free throws, the Knights had battled back from an eight point deficit to tie the game at 59 with just 2:23 left in the game. However, Manual didn’t panic, as Gordon, Marquis McClendon (12, #3), Noah Hawkins (10, #42) and Jo Aunn Rivers (12, #10) combined to hit seven of ten free throws to effectively ice the game.

“I’m not sure if we were great at the free throw line, but we hit enough free throws,” Manual Head Coach Jimmy Just said. “We made plays when we had to make plays, which is good.”

Manual jumped all over Lexington Catholic, who are the defending 11th region champs, early. The Crimsons started the game on a 12-3 run, and opened up a 29-19 lead with a McClendon layup with 4:21 left in the second quarter. If Johnson hadn’t kept Lexington Catholic in the game by scoring 13 of the Knights’ first 19 points, Manual could have blown the Knights back to Lexington.

“We just went at them with high intensity, and were aggressive attacking the basket,” Gordon said. “That allowed us to jump out early.”

Manual’s full court pressure reeked havoc for the second straight night. Early in the game, Manual was able to force turnovers to get a few easy buckets.

“Right now our pressure has been causing some problems for people, as well as our quickness and our athleticism. Our guys are using what they got right now, and when we do that, we’ll be okay.”

After Manual took their ten point lead, the Crimson offense went stagnant. The Knights outscored Manual 11-4 over the last 4:21 of the second quarter, cutting the Manual lead to just three at 33-30 by halftime.

“We just have to continue to stay aggressive, make sure that we’re not just sitting there because we aren’t as comfortable with that right now, and we’ll get better at that,” Just said. “But we gotta continue to keep looking to score when we have the opportunities.”

Fueled again by their full court pressure, Manual went on an 8-0 run in just 56 seconds to take a 43-37 lead. During the run, Manual forced three turnovers and got six points off of those turnovers.

“We are really quick, really athletic, so we can run and jump to rotate to help us force turnovers,” Gordon said.

After the run, Manual and Lexington Catholic went back and forth a couple of mental mistakes allowed the Knights to make their final run late in the fourth quarter, before Manual finally closed the game out.

“At times, we’re playing really well defensively,” Just said. “It’s just recognizing situations and personnel. We gotta make sure that we understand personnel a little bit so that we understand when we can or can’t leave somebody to give people looks and with [Lexington Catholic], we gave them some looks that they shouldn’t have gotten at times.”

Manual (7-2) will now advance to the finals of the Best in Hoops tournament, where they will face host Oldham County, who beat Male in their semifinal to advance to the title game. Fatigue could be a factor in the game, as both teams will be playing their third game in three days. Manual will be playing in their tenth game in 19 games, and fourth game this week.

“Hopefully these guys will take care of their bodies tonight, and we may have to call on some other guys to give us some minutes tomorrow,” Just said. “When you play in a tournament, sometimes you have to have guys step up when you need them.”