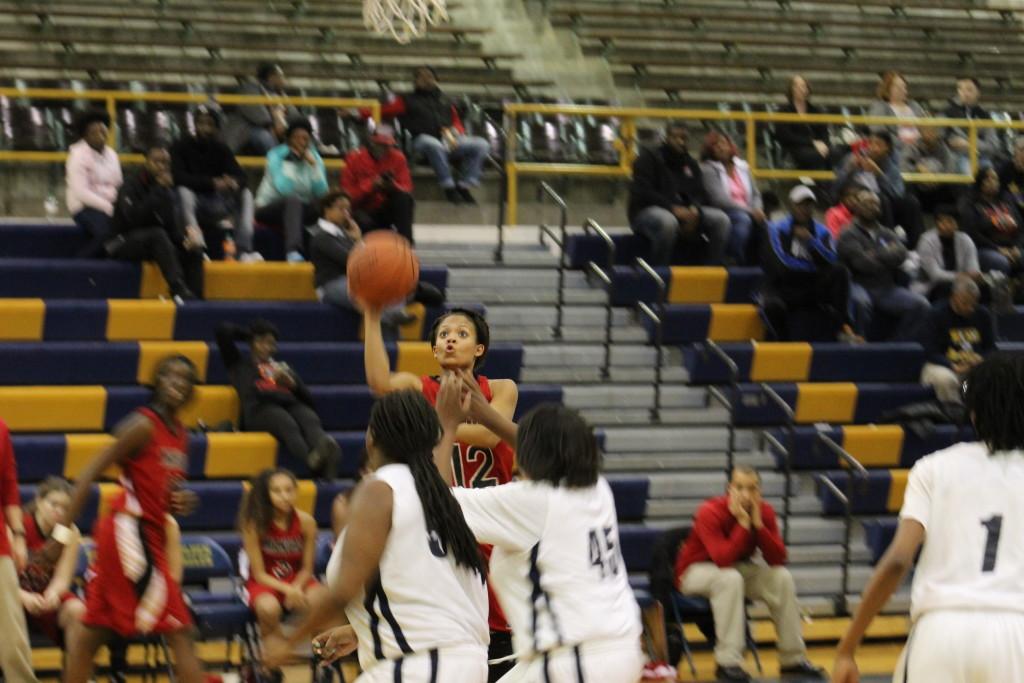 The girls’ basketball team defeated Shawnee in a stunning 62-17 victory on Friday, Jan. 8. As the game progressed, it was as if the Lady Crimsons could do no wrong—the offense was unstoppable, and the defense did not allow any open hooks.

Manual’s offense got off to a strong start early on with an immediate strike from the three point line, and the team showed no signs of slowing down from there. Tonysha Curry (11, #23) worked the post and drove the ball to the rim like a pro, while Tyonne Howard (10, #11) passed the ball effortlessly to find the open shooter on all parts of the floor. In the second quarter, Manual went on a 20-4 run, leaving the score at 43-10 by the end of the first half.

“We did really well tonight,” Head Coach Jeffrey Sparks said. “We played really hard start to finish and came out here with good energy, which is what we need to do every game.”

The Lady Crimsons utilized ball movement to the best of their ability during the game.  Howard focused on driving to the basket and then kicking out to the open woman for the three ball.

“We shared the ball great tonight,” Sparks said. “That’s something that we always look to continue against all the teams we play.”

Howard attributed the team’s success at working in tandem to extensive practice and drill work.

“We really looked up the court for each other today,” Howard said. “We weren’t being selfish. We do a lot of passing drills in practice to get used to it and learn the way our team moves.”

On the defensive side of the ball, Krys Mccune (12, #55) worked the boards to perfection and played shutdown defense. Shawnee was only able to score ten points in the first half.

“My offense wasn’t as sharp as I wanted it to be tonight, but I made it up on the defensive end,” Mccune said, “Defensively, we did great. We got a lot of steals and forced a lot of turnovers.”

Tonight’s blowout against Shawnee only serves to confirm that the hype about the Lady Crimsons is real. This year’s girls’ basketball team has gelled effortlessly, working together seamlessly on both sides of the floor.

With the Louisville Invitational Tournament (LIT) coming up on Jan. 27, the team took tonight’s win as a positive sign.

“We are working hard and fixing any bugs in our schemes right now,” Mccune said. “By the time the LIT comes around we should be ready.”

Manual’s next game is Saturday, Jan. 9 against Sacred Heart. Tipoff is at 3:30 p.m. This game will test the Lady Crimsons’ ability to deal with a team that tends to shoot from the perimeter.