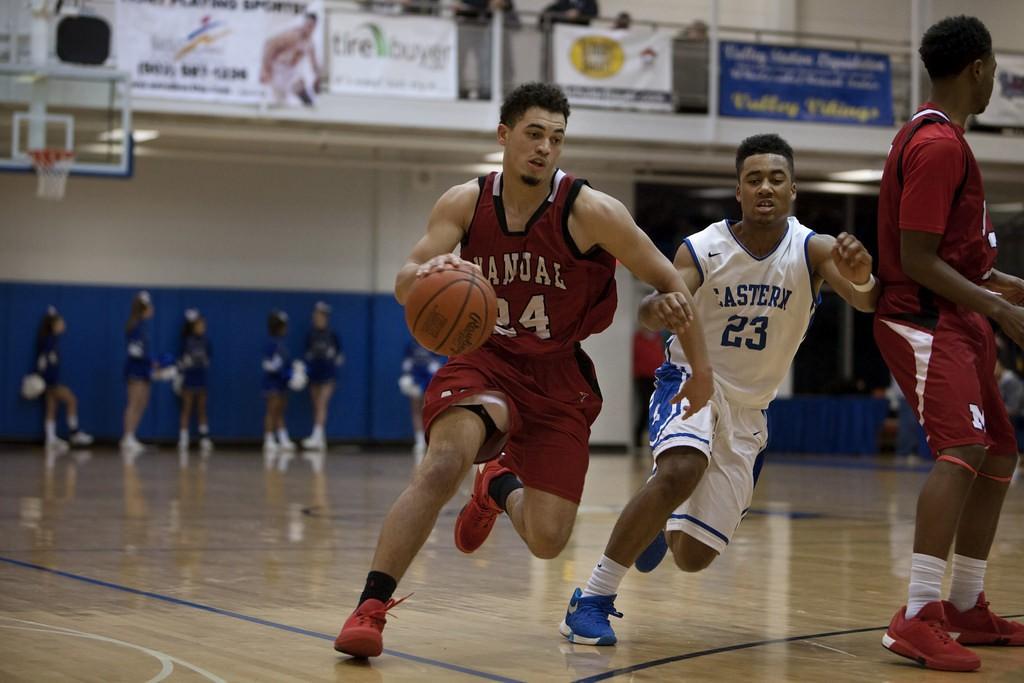 Tim Comstock (12, #24) drives to the basket. comstock was the epitome of Manual's attacking offense. Photo by Piper Cassetto.

With 1:26 left in the game and the score knotted up at 54, Eastern decided to hold for the last shot. The Eagles drew Manual’s defense out of the paint with a combination of drive-and-kicks and crisp ball movement. Then, with 11 seconds left on the clock, Eastern decided to attack the basket. The first shot missed, but Rushin managed to tip it in with the game clock winding down, giving Eastern the 56-54 victory and knocking Manual (9-8) out of the first round of the Louisville Invitational Tournament (LIT).

Despite the loss, which was Manual’s fifth defeat in of their last seven games, Manual Head Coach Jimmy Just remained optimistic about his team moving forward.

“We’re getting some losses right now, and that’s hard to handle,” Just said. “I think they know that they’re very capable and it’s just a matter of getting some wins, getting some confidence back, and I think that we’ll like a little bit better of a team than we are right now. We’re not making great decisions all the time but we’re doing some things better. We just have to keep putting it together.”

When Eric Niemann (12, #33) found a cutting TIm Comstock (12, #24) for the first points of the game not even ten seconds into the first quarter, it looked like Manual had learned their lesson from last week’s 53-47 loss to the Eastern Eagles and were prepared to exact their revenge. After Marquis Mcclendon (12, #3) and Steven Gordon (12, #21) hit back-to-back three-pointers to push the Crimsons up 14-9 over the Eagles and the Crimson’s finished out the first quarter leading 22-13, largely due to their stifling defense forcing turnovers and leading to easy transition points, it seemed they were primed to run away with the game. They were utilizing their athleticism to push the tempo of the game and dominate the boards, and it seemed like Eastern simply couldn’t keep up.

“We just came out trying to prove our point,” Niemann said. “Jumping on them early, we just tried to come out as fast as we can and get all the momentum we can.”

“[Our strongest areas were] rebounding and getting people open at good times,” Jo Aunn Rivers (12, #10) said. “We stayed aggressive, we kept each other in good spirits, and we just executed really well.”

However, even within this blistering opening quarter, Manual was beginning to crack. Despite scoring 22 in the quarter, Manual ended the first on a four minute scoring drought, and while the defense was merciless, they struggled to defend the interior, putting many key contributors, such as McClendon, in early foul trouble, which limited their role in what turned out to be a pivotal fourth quarter.

“In the second quarter, a couple of us got into foul trouble, which hurt us a lot,” Niemann said. “We kind of lost our momentum a little bit there.”

All of these problems came to a head during the second quarter, during which Eastern outscored Manual 12-5. The early foul trouble put Eastern in the bonus with 6:08 left in the half, which the Eagles would use to convert 8/13 free throws over the course of the half. The Manual offense came almost solely from attacking the basket and getting shots in the paint; however, no shots were falling, which lead to a 37% field goal percentage on just 10/27 shooting.  While the Eagles didn’t fare much better, shooting only 42.1% on 8/19 shooting, this slight advantage in efficiency, compounded with their free throw shooting and the emergence of guard Chance Moore (11, #11), who scored 27 points in the teams’ first meeting at Manual last week, allowed them to claw their way back into the game and cut the Crimson lead to only two at 27-25 by the end of the half.

“Eastern did a nice job defensively, and we weren’t as patient. We were flying around and trying to make things happen,” Just said. “We’re a team that wants to score in a hurry, and sometimes when we don’t do it we show less patience as we go.”

Eastern carried the their momentum right into the second half, immediately coming out hot and knotting the game up at 27 apiece, which would mark the first of 11 total ties on the night and the beginning of a back-and-forth battle between the two teams where it seemed as though neither could manage to swing the momentum completely in their favor.  Manual struggled to find the same lanes they were utilizing to attack the basket in the first quarter, but managed to replace it by getting to the charity stripe instead, converting on 7/9 free throws in the second half. The Crimsons finished the quarter out with a 41-38 lead, and it seemed as if they were ready to put the game away for good.

“When the refs would give a call, we got down, and we should have stayed up,” Rivers said.

In the fourth quarter, the Crimsons came out firing, with Jordan McClendon (10, #30) knocking down a triple to push the Manual lead to 44-40. Both Noah Hawkins (10, #42) and Rivers also knocked down crucial free throws to push the lead to 47-42, Despite these efforts, the Eastern squadron, now spearheaded by Moore, simply refused to go away. Moore and fellow guard Javen Rushin (11, #25) combined for 19 points in the second half, and converted on 14 of 17 second half free throw attempts. Their key contributions at the charity stripe allowed Eastern to slowly eat away at the deficit while preserving valuable clock,. Rushin’s pair of free throws with 1:40 left in the game pulled Eastern even with Manual at 54, and after a forced turnover, the Eagles won the game on Rushin’s tip-in. Neimann and Gordon led Manual in scoring with 17 and 12 respectively, while Rushin and Moore led Eastern with 16 each.

The Crimsons hope to use the loss as motivation and take advantage of the added practice time they’ll receive from being eliminated from the tournament.

“We just have to keep learning and keep getting experience,” Just said. “I think these close games are going to make us better down the road because our kids are going to feel comfortable in closer games They’ve been there before and they’re going to feel like they know what they need to be doing.”

“Everything’s there except for our confidence; we’re very shaky on confidence,” Niemann said. “In order to win you have to believe you’re going to win, and right now it’s kind of shaky. Through these practices we’re going to get that back and get our confidence back up. That’s the biggest thing right now, is confidence.”

After being eliminated from the LIT, Manual will look to regain their mojo when they host Bullitt East on Tuesday, Jan. 19. Tipoff is scheduled for 7:30 p.m.