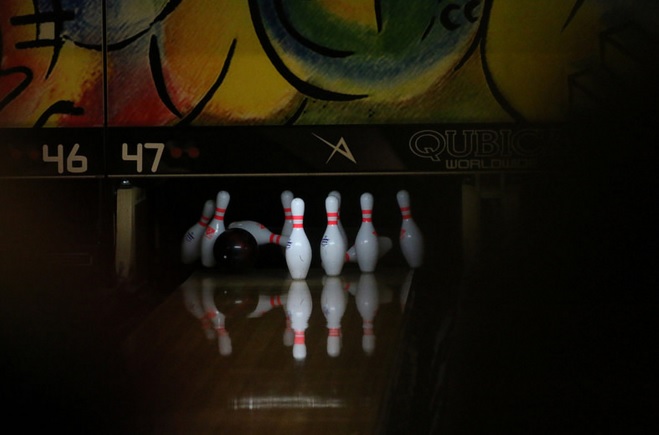 The Manual boys’ and girls’ bowling teams competed in the Louisville City Conference Tournament on Friday at King Pin Lanes.

The boys had some exciting moments in their bracket round games against both Christian Academy of Louisville and Trinity.

When the 12-seeded Crimsons fell in a hole 2-1 in a best of five game series to CAL, it looked like all hope was lost. Enter Nick Rowan (11), who came in clutch in the final two games, putting up strike after strike to put the nail in the coffin.

Rowan continued his success in the following match against Trinity. With the Crimsons needing three strikes in the final frame to tie the series with the Shamrocks, Rowan converted with all three again.

Ultimately, however, Trinity was just too strong in the end, beating Manual three games to one. Despite the loss, the Crimsons took away a positive message for future tournaments.

“We got some really good experience playing other teams–some really good teams,” Bray said. “Trinity played really well, and it gave us a feeling of how tough it is. We played our hearts out.”

On the girls’ side of the tournament, the Crimsons put up a valiant effort, but only won one bracket match before falling to PRP.

Manual’s bowling team is in action again this Tuesday at Executive Strike and Spare against the St. Xavier Tigers.