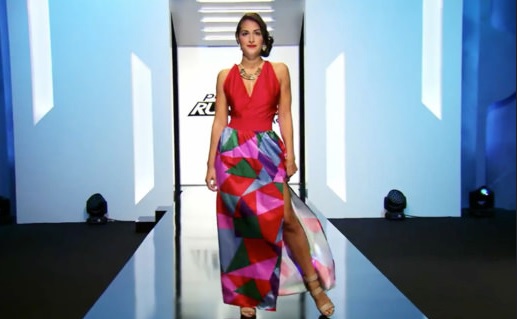 As a young boy, Zach Lindsey remembers watching his mom sew in her quaint studio located off of their small kitchen. Their cozy Chicago home was filled with fashion stands pinned all over with fabric, a Brother sewing machine and countless rolls of textiles scattered around the room. Mrs. Lindsey could always be found quilting fabrics and turning them into amazing sculptures.

Even though Zach comes from a family of artists—his mom is a textile artist, his dad is an animator and his sister is a photographer—he initially thought the best path for him was one filled with more certainty and stability: becoming a lawyer.

To solidify his career plans, he dutifully sought out internships and even shadowed at an area law firm.

“Zach’s personality of being loud and able to debate anything would suit him well in [that] line of work,” Ms. Amy Berry, one of Zach’s Design and Production teachers, said.

Zach quickly found, however, that the legal profession was not the best fit for him.

“I got bored, because you have to wear a suit and sit behind a desk all day. And then when we got to court, it was very boring because people yelled and screamed at each other,” he said. “Coming from an artistic family, I already had the art flowing in me, so I just decided to embrace it. That is where design came from.”

Deciding that being stuck behind a desk and being unable to wear his signature urban dapper style were restrictions that would prevent him from enjoying his job, Zach started to explore new potential career paths. During the summer before seventh grade, 12-year-old Zach decided to ask his mom to teach him how to sew.

“I was making pillow cases before long and was selling them at art fairs around Chicago,” he said. “I had my own little business. However, soon I got bored doing pillows so I started designing clothes.”

After moving to Louisville, Zach found that Youth Performing Arts School’s (YPAS) Design and Production department would allow him to develop his interests in fashion as he progressed into high school. As a middle schooler with an unusually fierce passion for someone so young, the application process came easily.

“It just consisted of a portfolio as well as a paper as to why you want to come to Manual and what would make you a good candidate,” Zach said.

Ultimately, Zach was one of the few students admitted to the YPAS Design and Production track.

“YPAS taught me how to construct garments,” he said. “My mother taught me how to sew, but never how to actually make a garment the correct way. I just did them the way I thought they should be. So going in Design and Production taught me the way garments should be fit to the body and patterns to make the designs off of.”

“Zach disagrees, but he only learned the basics from me, and terminology, the rest has been him,” she said. “I design costumes; he designs fashion—they are very different entities.”

As Zach continued through high school, he began seeking out ways to apply his talents outside of the classroom. The first season of Lifetime’s Project Runway: Junior begin casting in late 2014/early 2015, and Zach seized on the opportunity.

“Right after the KMAC Couture fashion show, I had nothing left to design for anyone, and I had finished all my Netflix and Hulu television shows,” he explained. “I did a random Google search and the link for Project Runway Junior popped up. So in four days, me and my sister made a video, and then we got in an argument so my mom helped us and that was the video we sent in.”

Though Mrs. Lindsey was the one who initially piqued Zach’s interest in sewing, she was initially doubtful that her son would win one of the coveted spots on the show.

“I think that he is very talented, but I didn’t want him to get his hopes up,” she said.

Zach was similarly uncertain as to whether or not the producers would enjoy his submitted designs or his personality.

“I did not think that I was going to get on, but I thought that it couldn’t hurt to try,” he said. “They ended up liking me.”

The Lindsey family took a road trip to New York—a 12 hour drive—which served as both a bonding experience and transportation to Zach’s first in-person casting interview. After another interview, Zach was cast on the inaugural season of Project Runway Junior, set to last 10 episodes.

“The work room was fantastic,” he said. “It was filled with the best machines and all the things you could ever use. It was great to work with sewing machines that you are not afraid of it breaking down. Having their machines and the possibility to do whatever I want was amazing.”

Zach has had the opportunity to experiment with a diverse range of styles as a competitor on the show, creating pieces such as a pink dress, a dress made of plastic, a pair of tailored trousers with a long-sleeved deep cut blouse and a floral jumpsuit.

As the show has been finished filming for awhile, Zach now struggles with the demands of keeping up with a rigorous academic schedule, commitments to YPAS and personal endeavors.

“The thing most challenging for me now is time management with clients, because I have to deal with school, extra curricular events and YPAS,” he said. “So now that I have gotten to a point where people are interested in me, I have to shut people down. I am very limited in what I can do.”

Already looking forward to the future, Zach knows where he’d like to attend college, and even what he hopes to pursue after his education is complete.

“I hope to go to FIT, the Fashion Institute of Technology, or the PRATT Institute for college, and then after college I want to stay in New York and open my fashion house,” he said. “I have one open now part-time. I want to open up one full-time.”

Looking even farther into the future, Zach already has a general idea of what he seeks to accomplish in the fashion industry.

“When I turn 50, I want to have a life brand,” he said. “So women can get things like bedding, cookware and stuff for her fireplace at my store like the Michael Kors brand. The one stop shop for everything, but have the fashion house be the center for the company.”

For now, however, Zach continues to design in his small studio divided by a portable wall from his mother’s. On his side of the room sits an old Nechi sewing machine—a thrift store gift from his Mom—as well as a table, mannequins, dress forms and a sewing table that once belonged to his grandmother. Currently, it is bare, but the drawings surrounding the space show that a new garment is in the works.

Though Zach has created dozens of garments in this studio, he still vividly remembers the first item of clothing he ever created in his mother’s small Chicago work space.

“I was six, and my sister and I made Halloween costumes,” he said. “We were angels, so I made us angel wings. They were made out of cardboard, tissue paper ripped up and lots of glitter. I never thought that it would turn into a career or anything—it was just me being creative.”

To submit your creative work to RedEye Community, please email us at [email protected]