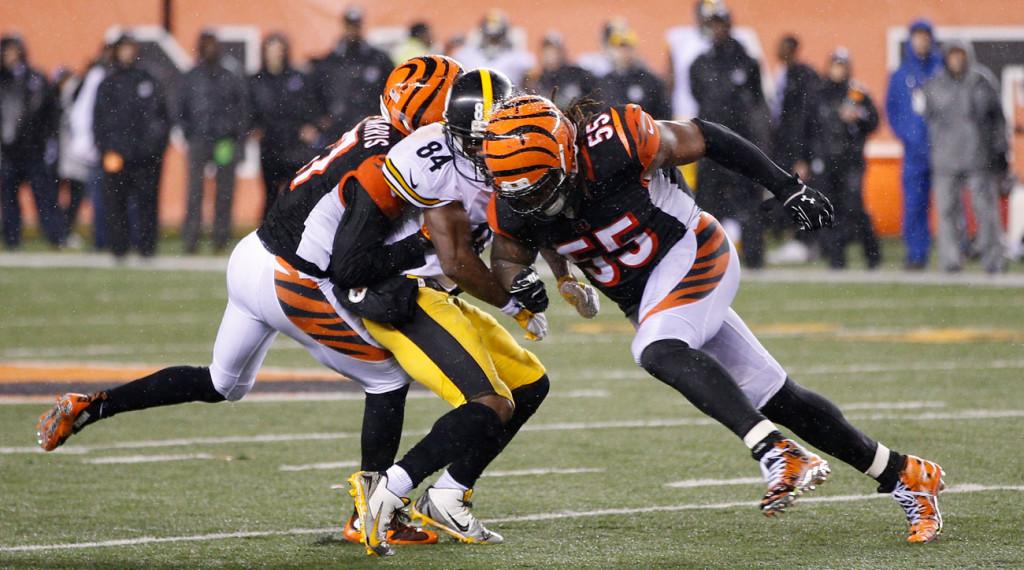 Burfict was suspended three games for his hit on Antonio Brown, the latest in a series of transgressions for the Bengals linebacker in 2015. Photo and caption by Joe Robbins (Getty Images)

As mounting scientific research connects head injuries sustained in high school football to long-term brain damage, it’s clear that the professionals aren’t doing much better. On Jan. 9, Cincinnati Bengals linebacker Vontaze Burfict enraged the football world once again by drilling Pittsburgh Steelers receiver Antonio Brown. The acts of unnecessary roughness which induced a concussion on the defenseless Brown led to a 15-yard penalty. However physical the game of football is, one fact is known: it is not safe. Professional football players put their future on the line to entertain us. The NFL’s concussion protocol has been under fire recently and we must re-evaluate its effectiveness.

A concussion is, as defined by the NFL, “a complex pathophysiological process affecting the brain induced by biomechanical forces”. This definition is not effective as it does not address the effects that concussion have on the brain. A more appropriate definition would be that a concussion is a traumatic blow to the head, spine, neck, or chest that affects the brain. This definition is vague on the effect of the brain, but allows for a more specific region of contact. By specifying these regions, team doctors and training staff can identify concussions quickly. This new definition allows team physicians and doctors to pull players immediately out of games in order to test them. The old definition leads many speculating if the “complex pathophysiological process” actually affected the player. Even though the change in definition will make minor changes at first, the definition will allow for the prevention of extensive damage to a player if he has been subject to a traumatic blow.

The NFL hasn’t done much to deal with concussions. With outdated equipment that doesn’t protect players enough, the NFL doesn’t have a good rapport when it comes to preventing concussions. In 1994, the NFL implemented a concussion protocol due to the increased cases of depression in former players. In 2000, the NFL had reported 36 concussions. Ten years later, the NFL reported a 168 percent increase in the number of concussions: 114. This number increased to 261 concussions in 2012. Before 2012, the NFL had been rarely implementing its concussion protocol during games. After 2012, the amount of concussions decreased to 202 in 2014. This number is still ultimately too high for something that is preventable. However, even though it may seem that the NFL is oblivious to this problem, new rules and penalties have been implemented. Between 2010 and 2014, the NFL has made six rule changes to help protect defenseless players. These rule changes have lead to the decrease in concussions.

Incepted in 1994, the NFL’s concussion protocol has evolved to fit the constantly changing game of football. However, with these changing rules and protocols, it is evident that a major part of football has not changed: the fans’ and players’ mentality. If hard-hitting tackles are taken away, football will lose most of its popularity because that is one of the main reasons why fans watch football. Additionally, rivalry games, like the Steelers v. Bengals, in which Burfict hit Brown, accelerate the rate of violence and thus exacerbate the problem. The NFL has done an increasingly better job in protecting players in rivalry games by calling penalties more willingly and quickly dissolving skirmishes at the end of plays. However, the NFL has been and is unable to change the mindset of fans. This can be changed as the NFL has tremendous market power from their monopoly over professional football. The NFL can take further initiative on the issue of concussions and force fans to “tag along for the ride.”

Personally, I have watched football since I was born, and I remember when players had their helmets blown off multiple times per game. Now, with the NFL’s new rules and concussion protocol, I rarely see a player get hit near their head. This attention to detail by the NFL has started to work, and I foresee that concussions will decrease at a steady level with the increase of research into brain damage.