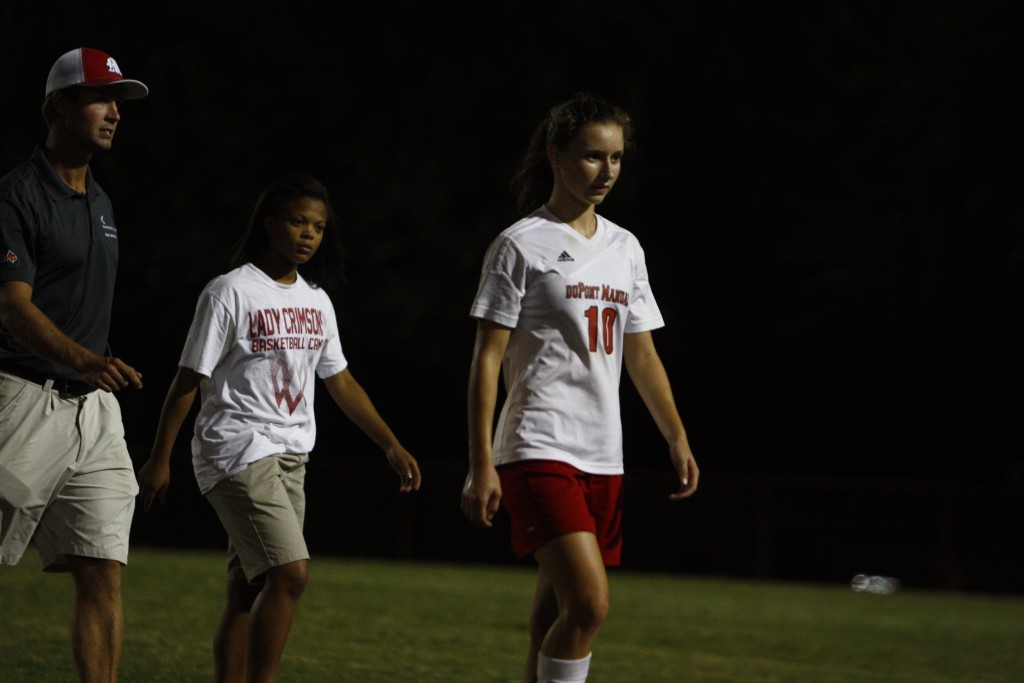 Manual soccer player Emina Ekic (11, #10) was named Kentucky’s 2015-2016 Gatorade Player of the Year today for her outstanding achievements in girls’ soccer. Athletic Director Mr. David Zuberer summoned Ekic to his office this morning, where she was presented her award via a video compiled by Gatorade.

“It was really exciting,” Ekic said. “I had a rush go through my body. I wasn’t expecting it because I’m only a junior, and they usually only give an award this big to a senior, so the adrenaline just pumped through my body.”

Even though Ekic, who scored 23 goals and tallied 15 assists while leading the Crimsons to the Region 7 semifinals this past season, had already been named an All-American by the National Coaches Association of America, and is also a member of the U.S. Soccer U-17 Women’s National team, she was surprised to win the award.

“This one definitely feels different because I have the high school player of the year, which is just in the high schools in our area,” Ekic said. “But this one is out of every girl in the state of Kentucky, which is something that is really big and exciting news.”

For Ekic, who is just a junior, winning the Gatorade Player of the Year award is an even larger feat than normal, because such honors are typically only bestowed upon seniors.

“A lot of times your seniors are usually stronger, they’ve got a little bit more experience, and lots of coaches will showcase their senior players,” Zuberer said. “So in a lot of sports, the seniors are going to be the most likely players to win awards.”

Ekic is the eighth Manual student athlete to win the award since its inaugural presentationin 1985; however, she is the first soccer player to be named the Gatorade Player of the Year.

“It’s great whenever we have kids that get state awards or national awards, and we’ve had a handful of Gatorade Players of the Year in various sports,” Zuberer said. “It’s a tremendous honor, especially knowing how strong girls soccer is in Kentucky, and how competitive it is for that award.”

Ekic’s award rounds out what has been an eventful three weeks for Manual athletics. On Jan. 14, girls’ basketball player Krys McCune (12, #55) was named a McDonald’s All-American, and on Feb. 3, three seniors signed National Letters of Intent to play sports in college, including Derek Dorsey (12, #92) who became the first football player to sign with a power five conference school since 2012.

“It lets people know that we’re more than an academic school,” Zuberer said. “I tell people all the time that I think that we’re the best combination of academics and athletics in the state. Everybody knows that our students are great in the classroom, and this helps let everybody know that we’re pretty good on the athletic fields as well.”

Ekic, who is the No. 10 recruit for the 2017 class, according to Top Drawer Soccer, still has unfinished business in her high school career before going to college.

“I’m looking to go to qualify for the Under-17 Women’s team for the World Cup, and just win state next year, to get Manual’s first,” Ekic said. “In college, I’m not sure. I’m going to the University of Louisville and I’ll see what happens from there.”

Zuberer hopes the Manual community fully honors Ekic while she is still in high school.

“I always want people to appreciate her while we have her here, and that’s what I hoping going into the next season,” Zuberer said. “It’s the equivalent to having a McDonald’s All-American basketball player. When you have the Gatorade player of the year, she’s on the national USA soccer team for her age group. We have somebody at our school right now who is the best of what they do in the entire country.”