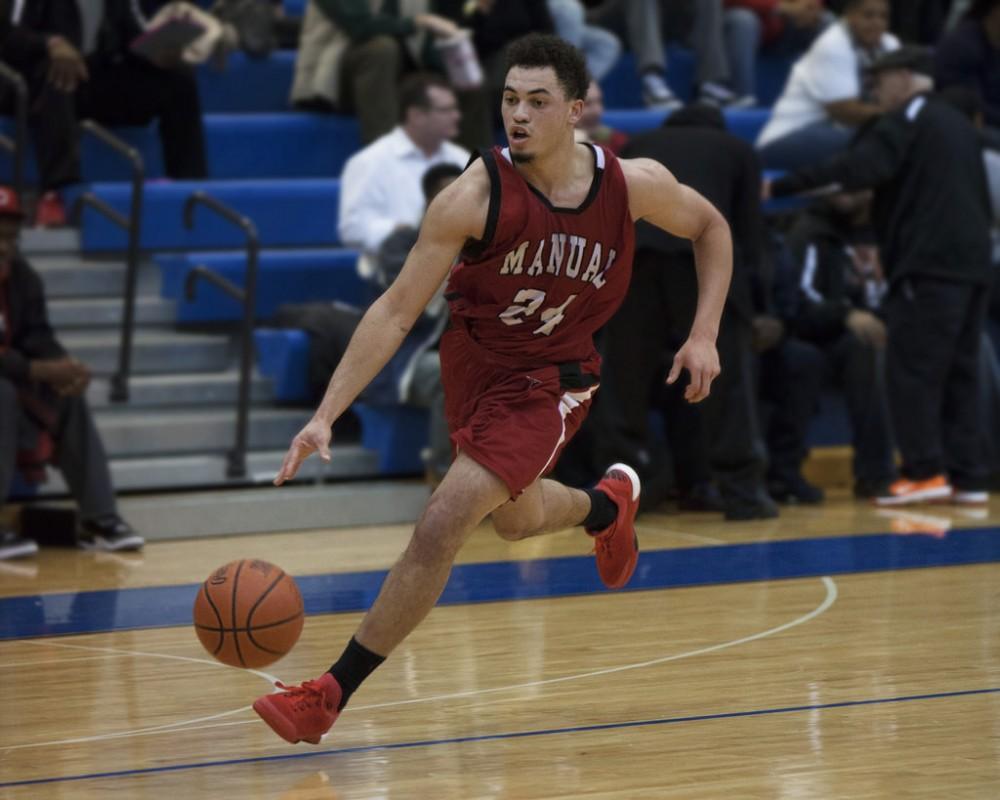 For what has become a theme for the boys’ basketball team (12-10) this season, the inability to play all 32 minutes of a game at a high level against a top opponent once again doomed the Crimsons, this time against Central (10-6).

Down just 53-46 with 3:45 remaining, Manual had a chance to make a run and get its biggest win of the year. Instead, the Crimsons folded, and the Yellowjackets went on a 13-0 over the next two and a half minutes, turning the once-close game into a 70-54 blowout.

“I think we started pressing a little bit,” Manual Head Coach Mr. Jimmy Just said. “We were trying to make some things happen, and we were a little impatient offensively.”

Throughout the ballgame, the Crimsons struggled to score against the pesky Central defense, as Manual only shot 28 percent in the game. Manual did not get many good looks due to quick shooting, and when there were open shots, the Crimsons couldn’t take advantage.

“We struggled putting the ball in the basket, and when we’re not scoring, it’s going to make it tough,” Just said. “We just gotta find some ways to score the ball a little bit.”

Manual also struggled with Central’s 2-2-1 full court pressure. Even though Manual seemed to remain calm, the Yellowjackets were still able to take advantage of the passive Crimsons.

Manual also struggled on the defensive end, especially in the second half. The Crimson defense, usually a staple for Manual this year, broke down late in the game, as Central got layup after layup to pull away.

“They just started getting some easy baskets,” Niemann said. “We shot 28 percent in the game, and they shot 50-something—and that can’t happen. The reason that they shot that well was that they were shooting layups, especially in the second half. They were getting wide-open layups and we weren’t getting anything out of our pressure, and their pressure was working against us.”

Manual has been able to compete with most of the teams on their grueling schedule, with Central, who is the number 12 ranked team in the state, as well as ranked third in the seventh region, being the latest example. The Crimsons can hang around for three, three and a half, and sometimes all four quarters, but have yet to come up with a signature win.

“That’s what we’re trying to figure out,” Just said. “What we have to do to try to figure how to do that. A lot of it is just getting it into our minds that we have to maintain things for four quarters, and that’s tough, but if we don’t do that we’ll struggle. But we’re getting better at some things, but tonight we just didn’t get some things done as well as we needed to. We’ll just go back to the drawing board tomorrow and try to figure out a few things, make some improvements, hopefully keep our confidence a little bit and I think we’ll be alright.”

The Crimsons cannot afford to hang their heads for too long, as they will have to recover quickly to get ready for another big game against St. X on Monday night.

“Coach said that we just have to forget about this game and get back to it,” Niemann said. “We got to focus on perfecting our offense, and we just gotta react better on offense; we have to react to what the defense does. Coaches are giving us plays, but they aren’t going to work every time in the correct order, so we just have to react, and that’s what we’re going to fine tune, and we’re just going to work hard in practice to get the defense corrected.”

“We just need to work our butts off, play hard and play how we know we need to play,” Rivers said.

Just wants his team to not mourn over the Central loss, but rather pick themselves up and have a strong showing against the Tigers.

“Hopefully our defense will help create some things, but it just all depends on who we’re playing and how we have to play in order to be successful,” Just said. “Tonight, we had to battle like crazy, and I thought we played pretty hard, but they did some nice things, and they got a nice team; we just gotta find some ways to slow them down a little bit more than we did tonight.”

Manual and St. X, which was supposed to be played on Jan. 22, was rescheduled for Monday due to snow. The Crimsons and the Tigers are scheduled to tipoff at 7:30 p.m. on Monday.