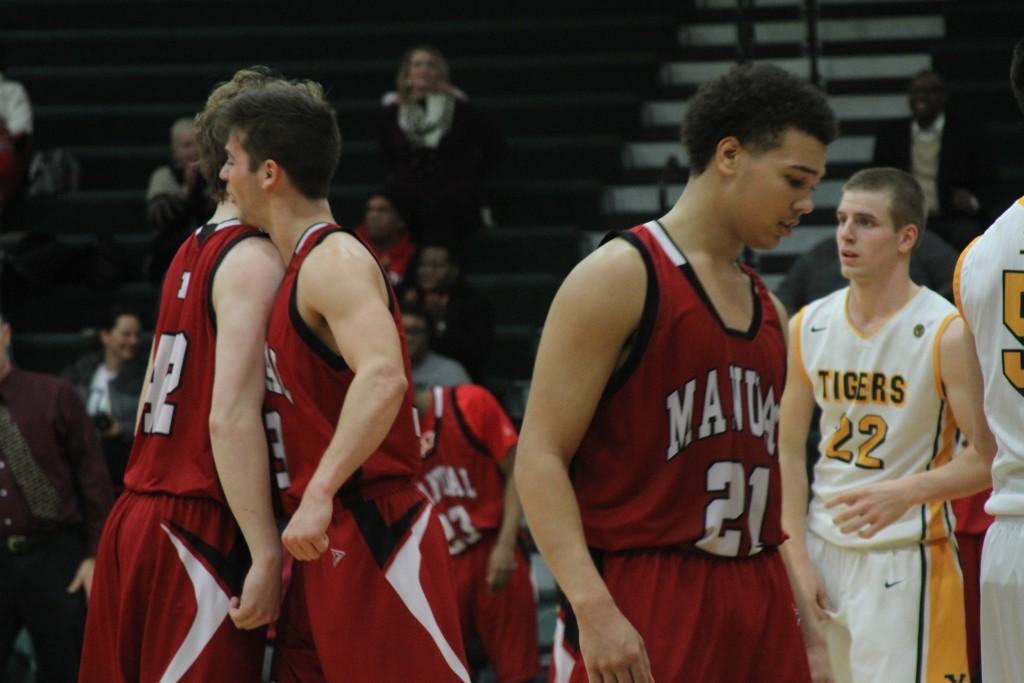 With just 2.2 seconds left, all the pressure was on Crimson guard Steven Gordon (12, #21). Gordon, who had just missed the first of two free throws, could still win the game for Manual by making the second shot. After a lengthy St. X timeout, the ref gave Gordon the ball at the charity stripe. Gordon took two quick dribbles, then put up his shot. The shot initially looked like it was going to fall short; however, the ball bounced off the front of the rim, then the back of the rim, ricocheted off the backboard and again bounced off the front of the rim before finally rolling into the hoop.

“I was thinking, ‘I gotta make this one; this is the one that counts.’ Everyone was believing in me, I had to make it,” Gordon said.

The free throw gave Manual, ranked eighth in the Courier-Journal Seventh Region rankings, a thrilling 57-56 victory over St. X, who is ranked fifth.

“I feel good [about the win],” Manual Head Coach Jimmy Just said. “I still see some things that we still gotta improve and work on, but we did some things better tonight. We were a little bit more consistent all the way throughout.”

Free throws were the difference down the stretch, as the Crimsons were able to win the game from the free throw line. While St. X made only 12 of 21 (57.1 percent) attempts, Manual converted on 13 of their 18 (73 percent) attempts.

“We’ve been putting a lot into our free throws for the last two years. We’ve just really tried to make sure that is not an issue for us,” Just said. “Our kids have been shooting free throws pretty well and hopefully, like tonight, they can see how important it is to be able to knock down free throws to go win ballgames. Hopefully that will keep them focused the rest of the way.”

“Free throws are always key for us,” Eric Niemann (12, #33) said. Niemann hit a pair of free throws to give Manual a 56-55 lead with 1:38 left in the game. “We work on them in practice every day, and today we came in knowing that St. X is a great free throw shooting team. I don’t know what they shot, but I know they missed a few, which was unexpected, and for us, shooting 73 percent is wonderful. Those were key points to have that changed momentum, because if you don’t hit those free throws it’s basically a turnover.”

After holding an early 6-2 lead, the Tigers went on a 10-0 run. Wil Olsen (12, #32) knocked down a pair of early three’s to lead the Tiger run. St. X would hold the lead throughout the rest of the first half and for almost all of the third quarter, when Marquis McClendon (12, #3) found Jo Aunn Rivers (12, #10) for a deep two. Rivers hit the shot and beat the buzzer to give Manual a 45-44 lead after three quarters. The shot was a huge momentum boost for Manual heading into the fourth quarter.

“It was big just giving us the lead and knowing that we can win,” Niemann said. “In that huddle going into the fourth quarter we were like, ‘let’s finish this out, play defense and stay on course.’ It helped us focus more for that fourth quarter.”

In past games this season, Manual has had chances to get signature wins, only to fall apart late in the game. This was evident in Manual’s losses to Ballard, Trinity, Oldham County, Bullitt East and Central. However, instead of folding against the Tigers, Manual powered through to victory.

“We held together and we didn’t give up,” Gordon said. “When it got rough, we came together instead of breaking apart.”

“In this game today, in the fourth quarter, we were able to counter their runs,” Niemann said. “Other times in the fourth quarter we’ve let the officials get into our heads, but today when they made a questionable call late we just came back on defense, got a stop and got the ball back. That’s what we need to focus on doing, just doing our job and what we can do better, and just finish games out strong.”

Manual proved tonight that the can execute in late game situations to pull out a win.

“We’re figuring out how to do some better things at the end of ballgames,” Just said. “As coaches we’re figuring out what these guys can do better and put them in situations where they can be successful, whether it be offense or defense.”

By beating St. X, Manual (13-10) has its signature win of the season. Manual’s only other quality win came when the Crimsons beat Waggener, ranked sixth in Region 7, back on Dec. 1.

“It was relieving,” Niemann said. “We came back into the locker room excited, as to be expected. It feels good to get that win against a quality opponent.”

For Just, he hopes getting a signature win instead of a moral victory will help his team’s confidence moving forward.

“It’s a whole lot nicer, and they [the players] feel better about it, yet they can still see that we got things to do because they can see the things that we’ve been talking about,” Just said. “By this time of the year, they’ve heard enough of the things that we still need to work on and improve, that they can tell me right now before I have to tell them.”

Gordon was the star for Manual against the Tigers as he scored 17 points while making five of nine shots from the field, and seven of his nine free throws.

“Stevie does a nice job. He’s one of our most consistent players. He’s what you want as a coach; he’s constantly trying to figure out what he needs to be doing for the team,” Just said. “I thought tonight he did a nice job, he’s a hard guard offensively, he’s hard to stay in front of. He caused some problems for them [St. X] tonight.”

“I feel like I played well,” Gordon said. “But I wouldn’t have played as good without my teammates giving me the ball in the right spot.”

McClendon was Manual’s second leading scorer with 11 points before fouling out. Noah Hawkins (10, #42), who also fought foul trouble in the game, finished with 10 points and six rebounds, while Rivers added six points and three assists and Niemann finished with five points and four boards. While the Crimsons only had eight bench points, they were all big as Kenyan Jacob (10, #22) hit a three to end St. X’s early 10-0 run. Will Britt (11, #23) also added five points.

For St. X, Connor McKim led the Tigers with 18 points and 4 assists while Pierce Kiesler added 16 points and six boards. Olsen was the only other Tiger in double-figures, as he added 12 points and five rebounds.

Manual does not have much time to celebrate the win, as they hit the court again on Tuesday to face off with twelfth ranked Atherton before traveling to Seneca on Friday. The Crimsons will then wrap up the regular season at Doss on Feb. 16 and will host rival Male on Feb. 19 before postseason play begins.

“We’ve been playing better this month and we just have to get ready for these next few games and hopefully in the postseason we can make a run and make it to Rupp,” Niemann said.

Manual will host Atherton on Tuesday night. Tipoff is at 6 p.m.

Stay tuned to Redeye for updates for the second edition of CSPN Gameday, which will air live on February 19 at 5 p.m.