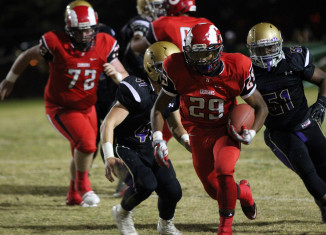 Troy Henderson (10, HSU) sits in his fourth block English class completing his warmup and talking with his table mates. When the teacher announces that she is giving back vocabulary quizzes from a previous class, Henderson sits a little straighter, his smile falls, and he becomes oblivious to the conversation happening directly in front of him. Once he is handed back his paper he breathes a sigh of relief and rejoins the conversation.

“I feel sensational when I do well on a test,” Henderson said.

Forty percent of Manual’s student body are student athletes, including Henderson. Every day before football practice Henderson sits in one of the recliners in the locker room, puts on his bright red Beats headphones to tune out his environment, and cracks open a textbook.

“It takes lots of focus and hard work [to get good grades]. On the days you have lots of homework, you need to worry about your grades while also worrying about how you can hurt your team by not playing,” Henderson said.

According to Athletic Director David Zuberer and counselors Marti Johnston and Amy Medley, the student athletes at Manual have an average weighted grade point average (GPA) of 3.66 compared to the school-wide average of 3.57 GPA. This is partly due to the standards placed on athletes by the school to maintain a 3.2 GPA, in addition to the Kentucky High School Athletic Association’s requirement that students must be passing 25% of their classes.

“I think the GPA is higher because of a couple different things. Firstly, our athletes have to manage their time very well,” Zuberer said. “Also, they are competitive by nature, which they carry into class with them.”

Waking up half past five is merely the start of the day for Manual basketball player Brock Cassin (11, HSU). In school he is tasked with intense academic coursework, followed by two and a half hours of physically demanding varsity basketball practice. Afterwords, he goes home and prepares for the next school day while helping his younger sister with her homework. After showering, Cassin heats up a plate of dinner, opens his math textbook, and tackles his own homework. When he’s finished, he then packs his backpack for the next school day. By 10:30 he is in bed, scrolling through his social media accounts for the last time before drifting off to sleep, just to wake up hours later and do it all again.

“To get good grades it takes focus and determination. You have to want to get it done after practice when you’re tired,” Cassin said.

For student athlete Ian Long (10, HSU), the most important part of the day is after the final 2:20 bell rings, when he has an hour and ten minutes to get his homework done before football practice begins. Long scrambles to log into the library computer, and while waiting for the server to load, shuffles through his backpack, searching for his Biology notebook. As he waits for the desktop to finish preparing he checks the time on his phone: 2:45. “Less than an hour,” he thinks to himself.

“I work harder academically because with football, practice doesn’t end until six, so I don’t get home until seven,” Long said. “That motivates me to get it done early.”

Many students engaged in school sports also say that they want to disprove the “dumb jock” stereotype.

“As an athlete, people automatically think I have lower grades and I don’t work as hard–this makes me work even harder,” said basketball player Alyssa Durbin (11, J&C).

“I think they have a higher GPA because athletes take more low-level classes. They don’t stress as much as the most Manual students,” non-athlete Jennifer Snelling (10, J&C) said.

While other students say that athletes have an unfair advantage, counselor Mrs. Medley says all students have the same opportunities to receive instruction outside of school–however, athletes are made to use them if their grades start to slip.

“Manual does a better job to identify if a student athlete is struggling to be proactive about it,” Zuberer said.

Good academic performance is important not only so that athletes can participate in sports, but for the distant future, past senior year.

“As student athletes, academics are more important. What you’re going to get done in the classroom is what will help you succeed later on in life,” girls’ basketball Head Coach Jeff Sparks (Economics) said.

After a tiring day of math problems and conditioning, the average student athlete finally arrives at their house. However, this is not the end of their day–for many, it’s back to business.

“It takes extra work. When I get home from practice I have a lot less time and energy to do my work,” basketball player Noah Hawkins (10, HSU) said.

As Henderson wraps up his nighttime studying, he turns out the light, lies down in his bed and envisions the next day. In just a short six to seven hours he will be up before the sun and off to school to repeat his tiring but rewarding schedule.

“It’s just part of the job. You take the good with the bad, and frankly I think the good outweighs the bad,” Henderson said.