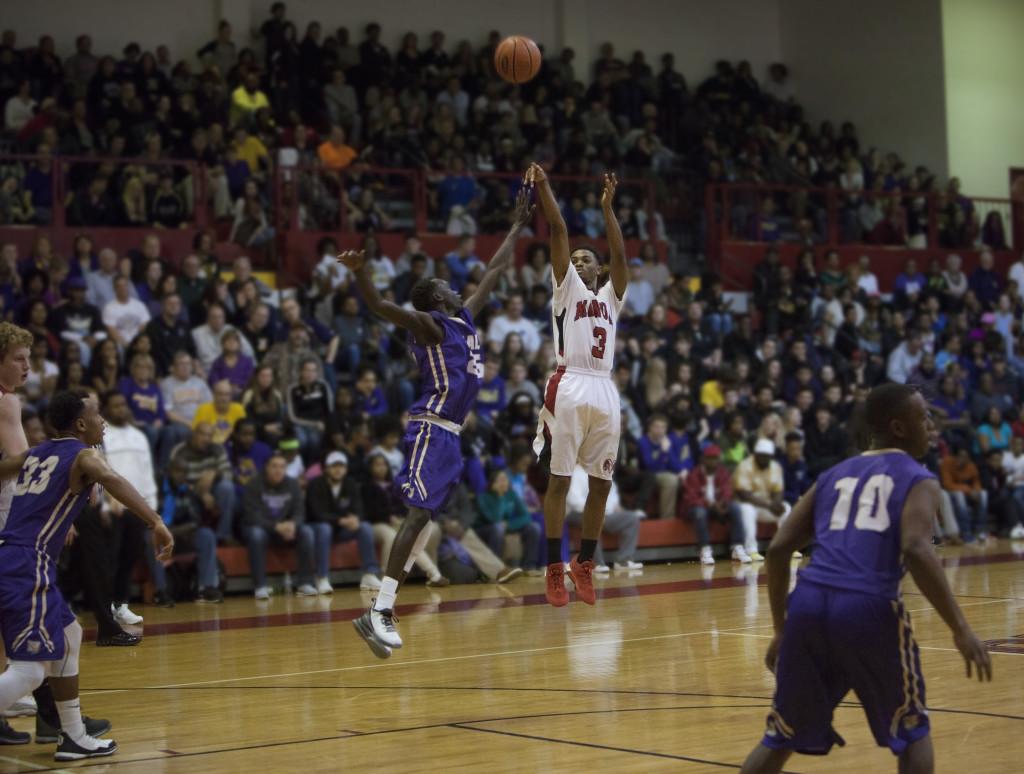 “I saw him [Watts] driving into the lane and I just knew at that point that I was going to send it out of bounds.”

Hawkins sprinted across the lane to come virtually out of nowhere and sent Watts’ shot into the bleachers. Manual would then get the ball back after an offensive foul and the Crimsons would get the stop that they desperately needed.

“What I was glad about was that it was a defensive play,” Manual Head Coach Jimmy Just said. “That’s what I want these guys getting excited about, making defensive plays.”

On Manual’s next possession, Rivers found an open Steven Gordon (12, #21) on the wing, who sunk a three. The two plays sparked a 13-6 run to close out the rival Bulldogs and give Manual an 89-80 victory.

“We handled their run,” Just said. “We bent, we bent a whole lot there, but we didn’t break. We made some plays when we had to make them and I’m proud of these guys. I think they stepped up and played well tonight.”

The Crimsons started the game firing on all cylinders, as they opened the game on a 12-3 run behind Tim Comstock’s four points and two steals. Manual used a 9-1 run to start the second quarter to build up a 27-14 lead by as many as 16 before halftime.

The game featured an entertaining fast paced game, with both teams flying up and down the court, which favored the Crimsons, who excel offensively in transition.

“I think that both teams play a little bit better that way,” Just said. “I know that when we play up-and-down we’re more aggressive and we do a better job offensively, and I think Male’s the same way. They tried to play a half court game at times but they like to be able to get up-and-down when they can.”

Manual was able to take advantage of the up tempo style by constantly driving to the basket to score in the paint.

“we just took what they gave us, and they gave us lanes in the open court, so we took them and advanced the ball to try to get to the basket,” Eric Niemann (12, #33) said. “We were four out of seven from three tonight, so most of our points were near the bucket.”

“This whole week, we’ve been talking about how this big game, how all big games, are a game of runs,” Niemann said. “Male’s a great team, they’ve only lost three games this whole year, so when they made their run we just tried to get it back together, try to get a stop and get an easy bucket. That’s what coach is preaching on us, to get stops and easy buckets.”

Throughout the game, and especially during Male’s run, Manual struggled to slow down Male star and Mr. Basketball nominee Alex Cook (#24). The Crimsons tried putting multiple defenders on him, but his size and length were too much for Manual. Just’s most successful option was to put Niemann on Cook, and Niemann did have some success on the six foot six Bellarmine signee.

“He’s a great player; he’s long,” Niemann said. “So what I tried to do was just get in his legs, and that’s because he’s really hard to block, so I tried to put a hand in his face, get into his shooting motion and try to mess him up. He made some tough shots and coach said, ‘You just gotta live with it, he’s a good player, get him next time,’ so I was just trying to just be physical with him.”

After calling multiple timeouts, Just was finally able to calm his team down after Male tied the game, and after Hawkins’ block, it was Gordon who hit another clutch shot.

In Manual’s three biggest wins, Gordon has hit some of the biggest shots. Against Waggener on December 1, Gordon hit a buzzer beater three to send the game into overtime; against St. X on Feb. 8, it was Gordon’s free throw with 2.5 seconds left that gave the Crimsons a 57-56 win, and tonight it was his three that sparked the closing Crimson run against Male.

“Stevie’s been playing really well,” Just said. “He’s been playing well most of the year, but he’s playing even better now. I think it’s a matter of him getting more experience and confidence.”

Gordon isn’t the only Manual player whose confidence is soaring. Beating Male (24-4), who is ranked sixth in the AP poll and third in the Region 7 rankings, is easily Manual’s signature win of the year.

“It puts our confidence through the ceiling,” Hawkins said. “Especially tonight, in a rivalry game, we’re elated right now.”

For Male, Cook led all scores with 31 points. Watts contributed with 15 points and Cory Bowman (#1) added 11.

After sitting at 9-9, the Crimsons (16-11) have caught fire at the right time, and are now going into the District 25 tournament riding high having won seven of their last nine games, including their two signature wins, Male and St. X, coming in the last eleven days. Manual is peaking at the right time.

“I think we’re playing better, and I think we still have a lot of room to go to be able to peak,” Just said. “This group can still get a lot better. But they played really well tonight and I definitely think we’re going in the right direction.”

“We feel like these past three weeks we’ve been playing a whole lot better,” Niemann said. “Practices have been better, and we’ve been playing better in games. In this game, coming off the Doss loss, this game boosts our momentum exponentially. Going into the postseason, we’re riding high right now; we believe that we can win this region and go to Rupp.”

The Road to Rupp will start next week for Manual, as they will play Shawnee in the first round of the District 25 Tournament. If Manual beats Shawnee, they are guaranteed a spot in the wide-open seventh region, where anything can happen. One thing is for certain though, the Region 7 powerhouses better watch out for this Manual team, because they can beat anyone in this wide-open region, just ask St. X or Male.

“People will have to start paying attention,” Just said. “The bottom line is that if you beat them in the tournament, they’ll be aware of you. This win should do nothing but help us get some confidence and just remind us that we can play with anybody, we just have to keep playing.”

Manual will face Shawnee at Central High School, which is the host of the District 25 Tournament, on Wednesday at 7:30 p.m.