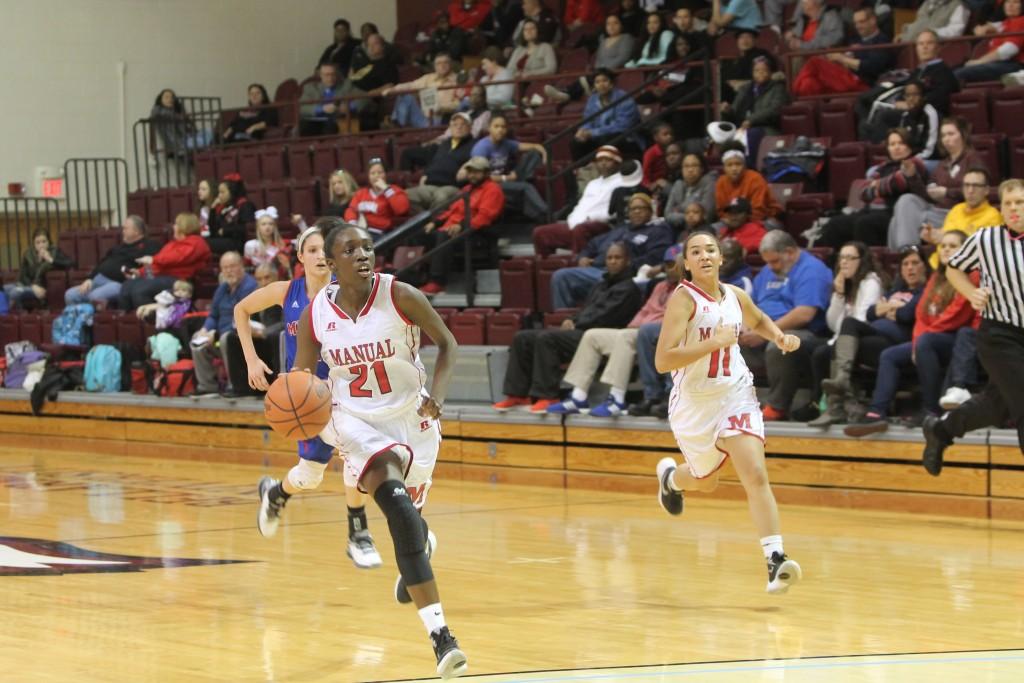 The Lady Crimsons battled hard against Male tonight, losing 55-44 in regulation—a score which does not reflect the intensity with which the girls’ basketball team played. Led by Tonysha Curry, (11, #23), Krys Mccune (12, #55) and Aniah Griffin (10, #21) the team was able to break free from their defenders, but could not get their shots to fall.

The game was decided by rebounds—the Bulldogs would make a well-defended shot, get another rebound and just continue the pattern. The Crimsons, on the other hand, could not get a shot to fall during the majority of the game. Mccune and Curry had difficulties with teamwork, making a few plays on their own and being generally quiet throughout the game.

In a notable bright spot, Jaela Johnson (10, #33) was a source of instant offense for the Lady Crimsons tonight.

“I played well tonight, but it wasn’t enough for us to win.” she said. “Overall our offense did well we got open and took good shots, we could have shared the ball more with other though.”

At parts of the game, it seemed as if the Lady Crimsons were just on a bad luck streak—one player would put up a good shot, the ball would rattle off the rim and then another player would grab the rebound, missing the open layup.

“This game was very frustrating,” Head Coach Mr. Jeffrey Sparks said. “We felt like we had some of the right kids making the right plays in, and it just wouldn’t drop—nothing we could have done about it.”

After a hot start to the game (16-13), the Lady Crimsons quickly slowed down, losing key momentum.

“We had some opportunities, and we couldn’t capitalize,” Sparks said. “Tonight was a game we could have won, and we can’t just look at this like a game where we got unlucky. We need to work on our layups and boxing out to defend against the offensive rebound.”

The Lady Crimson defense did manage to play well against the much bigger Male team. The Bulldogs pushed back on offensive against the turnover, forcing Manual’s defense by getting the second and third shots. The Bulldogs retrieved a lot of their own rebounds to attempt to take another shot.

“One thing this team does well is exploit their size,” Sparks said. “They are a very good rebounding team, and we are too, but we need to get better about defending the second chance shot and boxing out other players.”

With this being the girls’ last regular season game, Manual’s loss seats the Bulldogs as the team to beat going into the state tournament.

“If you go by what you have been able to accomplish during the regular season, Male is the team to beat going into the state tournament.

“If you go by what you have been able to accomplish during the regular season, Male is the team to beat in our district,” Sparks said. “We have to catch up to them for the tournament.”

Stay tuned to RedEye for updates on the first round of the state tournament announcements.