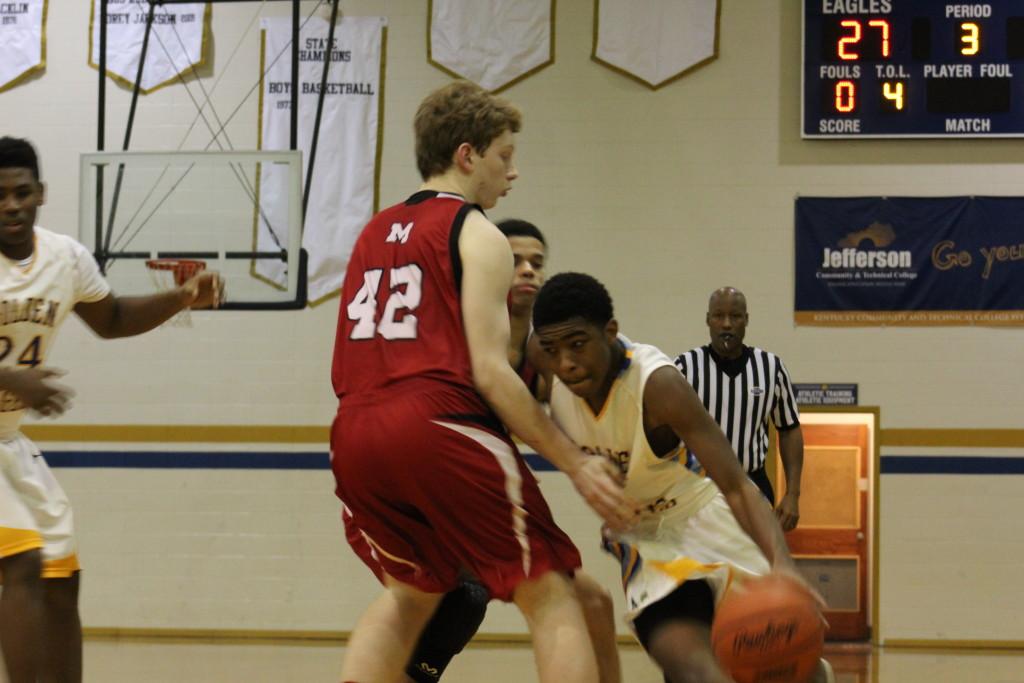 It appeared as if Manual’s win over Shawnee in the semifinals of the District 25 Tournament  had been decided before the opening tip. Even from the warm-ups it was clear that Manual had been energized by their statement wins over Male and St. X, and that the team was chomping at the bit to prove their place in this tournament. The Crimsons practiced with a confidence and fervor that was a new sight for the team that limped into the tournament with a 16-11 record and lacked a signature victory until just recently. However, whatever doubts Manual has shown throughout the season were instantly quelled tonight when they surged to an energized, high-octane 90-53 victory over the Shawnee Golden Eagles.

“I believe that had a big impact on our confidence,” guard Jo Aunn Rivers (12, #10) said in regards to the wins over Male and St. X. “I feel like that was a major key to us winning today and winning future games.”

Manual set a blistering pace early on, with center Noah Hawkins (10, #42) leading the charge after scoring the first points of the game. Hawkins went on to lead the Crimsons on a 21-5 run through the first quarter, during which he poured in six points and showcased his tenacious rebounding skills. Manual’s defense was also relentless, harassing ball handlers in the half court, hawking passing lanes, coming up with steals that benefited Manual’s transition offense and stifling any looks that Shawnee found in the low-post. The Golden Eagles weren’t even safe in transition, as evidenced by an emphatic block by guard Jordan McClendon (10, #30).

“We felt like [Hawkins] should have a pretty good game tonight,” Manual Head Coach Jimmy Just said. “It was a tough matchup for Shawnee. They didn’t really have a lot of size, so we thought that should be an opportunity for a good game for him and I think he took advantage of that.”

The Crimsons seemed primed to pick up right where they left off at the start of the second quarter, especially when Hawkins again scored the first points of the quarter after missing the inbounds alley-oop, grabbing his own rebound and laying it up. However, Manual’s energized style of play was hampered not by the Shawnee defense, but by a litany of fouls on both teams that slowed the game to a halt  and turned the contest into a slog. This break in pace seemed to peak when a badly choreographed pass by Manual led to a Shawnee steal and a dunk in transition. But what seemed like a momentum changer for Shawnee actually seemed to spur the Crimsons on even more. Guard Tim Comstock (12, #24) found Britt  for an easy transition three, which was later followed by a surprise three by Hawkins. The run peaked with a monstrous transition jam by McClendon and the Crimsons went on to lead 41-16 at the half.

“We just had to keep the defensive pressure on them the whole game,” Britt said. “We just can’t let off, knowing who the team is. They didn’t have anything to lose tonight. They could have sent us home as easily as we sent them home.”

While Shawnee eventually found their rhythm from deep in the third quarter, at one point hitting back-to-back long bombs and cutting the Manual lead to 46-22, they were no match for a Manual transition game that was firing on all cylinders. Even when Hawkins picked up his third foul early in the quarter, the Manual offense didn’t seem to skip a beat. Their confidence was exemplified by an absurd alley-oop inbounds pass to McClendon that left the entire arena reeling and put the Crimson’s up 65-33 at the end of the third.

From there on out it was smooth sailing for the Crimsons, who saw a major showing from many of their younger players. Kenyan Jacob (10, #22) showcased his offensive prowess throughout the quarter, as did guard Terrance Ballard (11, #34). Ballard went on a tear late in the fourth quarter, snagging a slew of steals from Shawnee and scoring eight in a row for the Crimsons in a period of two minutes. With their offense executing perfectly the Crimsons cruised the rest of the quarter to a 90-53 victory over the Golden Eagles.

This win continues a string of momentum-filled victories for the Crimsons, who have won three of their last four games as well as eight of their last ten. The team hopes that this momentum can carry over throughout the rest of the tournament and help Manual make a deep postseason run.

“It lets us know that we’re capable of playing really well when we want to,” Just said. “I like where we’re going. I feel like we’re moving up, we’re stepping up our game and we’re getting better each time we go in. I still we’ve got a ceiling a lot higher than where we’re at. I don’t think we’re peaking yet. I think we’ve still got an opportunity to peak here a few weeks down the road if we can continue doing what we’re doing.”

This win guarantees Manual a place in the Region 7 Tournament, but a win over Central would mean home court advantage for the Crimsons in the quarterfinals of the Regional Tournament and a match-up with a district runner-up instead of a district champion.

“That’s something that we talked about,” Just said. “Just a little extra motivation hopefully to get these guys to understand, ‘Hey, we’d get to have another home game. that’d be great.”’

The Crimsons are already looking forward to their next game against Central, another athletic team with speed and tenacity that Manual lost to earlier in the season.

“Their transition offense, I think if we can stop that, we’ll be in good shape,” Britt said.

“It’s about handling situations at the right time,” Just said. “Recognizing and then doing the right thing when you see whatever you have to do. A lot of the times if you’re winning, a lot of the time it’s handling the pressure, and if we do that I think we’ll be in pretty good shape.”

“We all just need to come ready and make sure our defense is our factor,” Rivers said.

Manual will face off against the Central Yellowjackets in the Finals  of the District 25 Tournament on Friday, Feb. 26 at 7:30 PM at Central.