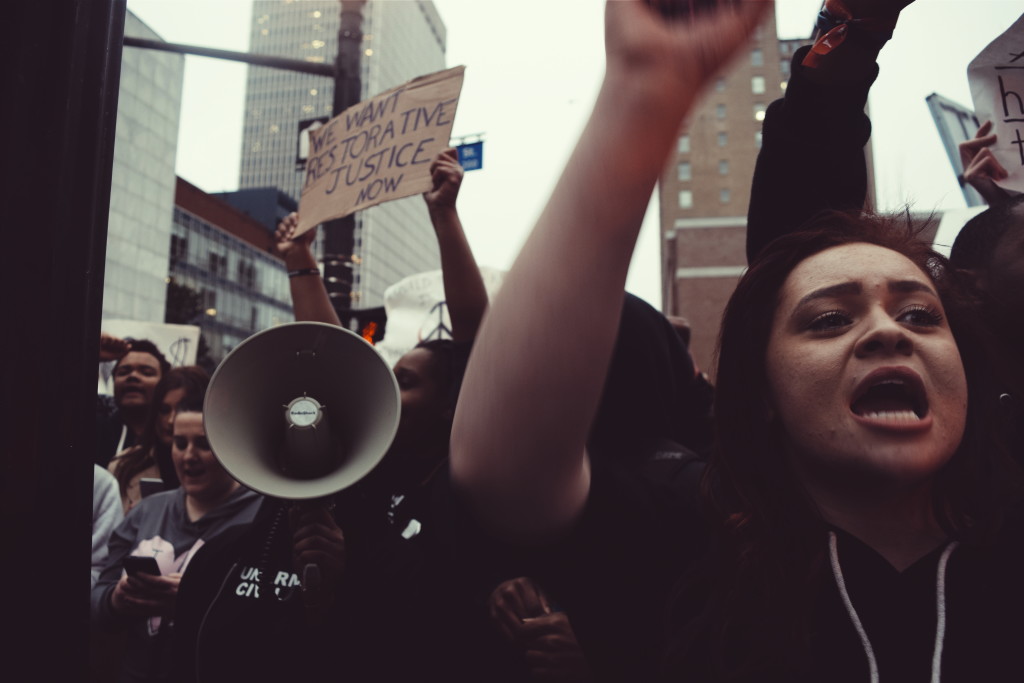 Processed with VSCO with acg preset

Just after 4 p.m. on Tuesday, March 1, Republican presidential frontrunner Donald Trump walked out on the International Convention Center stage in downtown Louisville to a thunderous applause—but the event had been in full swing since noon that day. Debate captain Kayla Soren (12, HSU) had waited in line with her team before the doors opened in the early afternoon, along with Jahné Brown (12, J&C) and the group of Manual student protesters she helped organize.

After an introduction by New Jersey Governor Chris Christie, the man of the hour started his speech. A Secret Service agent in the crowd approached Mia Thomson (12, J&C). After examining the “#NEVERTRUMP” sign she pulled from her coat, he followed her through the crowd and grabbed her arm, saying that no homemade signs were allowed. Other members in the student protest group exchanged glances and quickly realized they didn’t have much time left before security noticed them too. With the convention center now silent, save for Trump’s booming speech, protester Noah Ramsey (12, HSU) led the charge, raised his sign, and began chanting.

View another segment of Ramsey’s interview on the Manual RedEye Vimeo page.

Trump’s visit ignited the entire city, drawing crowds by the thousands. Lines for the event wrapped around the convention center building and down Fourth Street, snaking past dozens of Trump merchandise vendors and protest groups alike.

Such a polarizing celebrity figure sparked wide engagement by Manual’s student body, particularly among seniors, many of whom were out of school due to the first annual senior service day. Brown, Sarah Olive (12, HSU) and Huda Jabbar (12, HSU) organized the rally via a Facebook group entitled “Louisville Youth Against Trump.”

Brown and Jabbar said that they listed their participation in the protest as their community service to miss school on March 1.

“I think it would be reasonable for the administrators to not count it, but we’ll see,” Brown said. “I am going to say that I basically did service to my community by standing up for other Manual students.”

“We did this specifically because it’s Donald Trump,” Jabbar said. “We’re not saying that Republicans are bad, or that conservatism is bad. We protested because of the racist and bigoted comments that he has made throughout his campaign.”

Henry Owen (12, HSU) and Luke Sheridan (10, HSU) were among the Manual students who decided to attend the rally not as protesters but as observers.

“Not often do political personalities come to Louisville so I figured I had to go,” Owen said. “He’s a once in a lifetime candidate.”

“I came to the rally because I thought [Trump] would say some pretty crazy things,” said Sheridan, who, after seeing a glimpse into the passion and sheer volume of his supporters, predicts that Trump will ultimately receive the Republican presidential nomination.

Trump’s visit to Louisville didn’t just capture the outrage and curiosity of Manual students—students throughout Jefferson County and even outside the state seized the opportunity to attend the rally.

“I was in charge of outside protesting, including making sure the streets were clear and that police could get through,” said Isai Sanchez, a Central High School senior.

Sanchez worked with Stand Up Sunday and the Kentucky Alliance to prepare and eventually lead the largest protest that took place outside the convention center.

“I started chanting ‘no justice no peace’ and ‘build bridges not walls’ into the megaphone, and as more people joined our group I organized them and spread them thin along the street,” he said.

Underclassmen and juniors could not join Manual’s protest group until after school, and some joined outside protest groups such as Sanchez’s to avoid the long lines into the rally. However, the seniors in the Louisville Youth Against Trump group were able to stick together and arrive early due to their day off.

Assistant Principal Mr. Greg Kuhn said that, in his view, as long as the student protesters stayed out of trouble, he had no problem with the specific way they chose to spend their service day.

“My stance on the service day was that it’s up to the seniors to decide if something is worth their time,” he said. “Unless somebody was getting in trouble with what they were doing, I will trust that what they invest themselves in was really important to them.”

After reflecting about the event in the Facebook group, Brown and the other demonstrators from Manual came to the conclusion that the student-led protest was a resounding success. And, Brown said, Trump’s solid Super Tuesday victory does not deter her hopes for a future president that, as one of the group’s signs stated, “does not hate us.”

“As long as we have people who are willing to stand up for what they believe in and do the right thing, I think we’ll be okay politically,” she said.