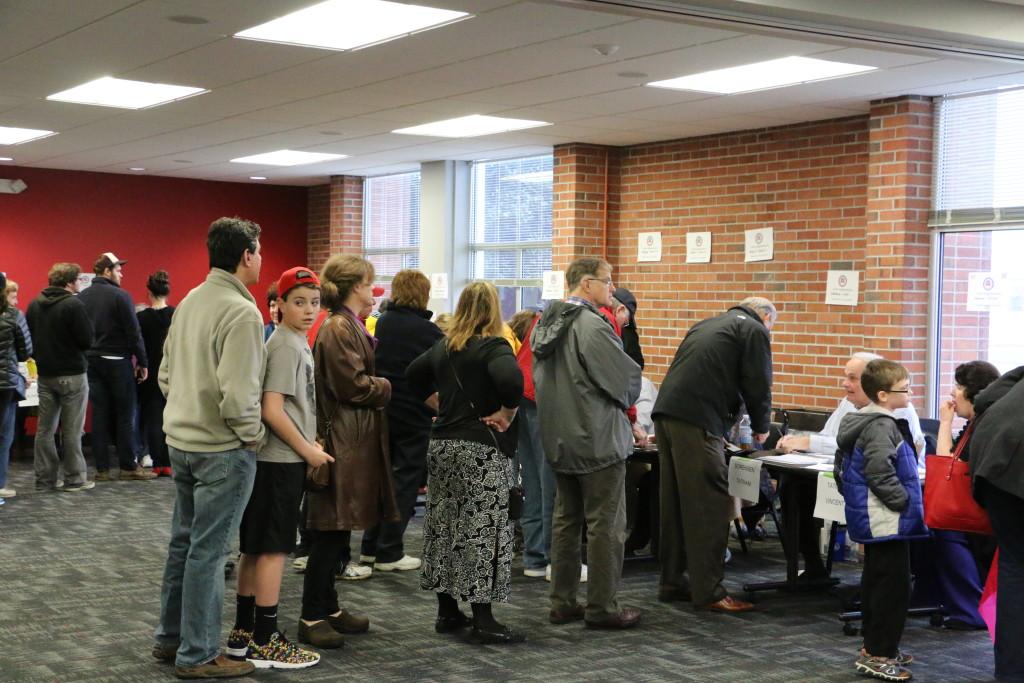 Jefferson County Republicans gathered at eight central locations across the city yesterday for the party’s first-ever presidential caucus in the state of Kentucky.

The process was a caucus primarily in name only—per the state GOP party’s decision, citizens cast their votes via secret ballot on a sheet of loose paper.

“When they first said it was it was going to be a caucus, I assumed that there would be different rooms where people would go and congregate, and then they’d cast their ballot,” Alex Shah (12, HSU) said. “If you’ve ever been to a regular primary election with your parent, this was pretty much the exact same thing. Everyone goes to the same room and you just fill out the paper.”

Shah said that though he did not feel particularly drawn to any of the Republican candidates, he decided to participate in the caucus to oppose current GOP frontrunner Donald Trump.

“I am not strongly leaning toward any of the main candidates,” he said. “I just wanted to make sure that I voted for someone who wasn’t Trump, so Trump would not win Kentucky’s delegates at the national convention … I feel like he does not represent what a true Republican is. The majority of the Republican party is Christian, and Christians are taught to believe that they should love everyone. Trump saying that he will stop immigration was just a dealbreaker for me.”

Chris Hurst, a 17-year-old student at St. Xavier High School, said that he only registered to vote a few weeks ago.

“The biggest issue for me is the debt,” he said. “I’m not really big on social issues, but I don’t want to inherit government programs that don’t work anymore and won’t ever serve me. I don’t want to be someone who pays into Social Security and Medicare but doesn’t get benefits because they’ll basically be collapsed by then.”

Hurst said that he planned to vote for Senator Ted Cruz.

“I really like Ted Cruz because he’s a constitutional conservative,” he said. “I like separation of powers. Right now, I think Obama has taken too much executive power, and I don’t really like that.”

Though the voting itself was secret, some campaign volunteers and independent citizens did set up tables in a common area at the University of Louisville Shelby County location to advocate for their candidates.

Stephen Bayers, a volunteer with the Donald Trump campaign, said that his support of Trump is founded in a wide array of current political issues.

“Trump advocates for a strong military, a firm control of the borders,” he said. “I think the concern[s] to balance the budget, have a more responsible approach to healthcare and to get more people working are important. He’ll bring back a lot of jobs and investment to America.”

Bayers said that he thinks that Trump has been unfairly criticized for his history of racist, sexist and otherwise inflammatory remarks.

“Nobody’s perfect, but I think he gets a bad rap,” he said. “Historically, Trump has gotten involved with people of all races and backgrounds. I think he is simply speaking to issues that are a problem for us today, and he does it in an expansive way which gets attention. I think he’s just dealing with reality … He’s from New York—people there can be pretty blunt and sharp in their comments.”

Other local residents chose to set up camp at the caucus location to advocate for general issues and organizations, instead of specific candidates.

Ruth Alves spoke to incoming voters as a representative with both the Louisville Tea Party and Take Back Kentucky, both local conservative organizations. Alves urged caucus participants to sign petitions advocating for the elimination of Common Core, the reduction of sales tax and the preservation of Second Amendment rights.

Alves said that she was disappointed that more citizens did not show up to speak about different candidates and political issues, particularly her candidate of choice—Ted Cruz.

“I thought there would be more representatives here to fully talk about the issues and what their candidate believes in,” she said. “I’m a little bit disappointed that there aren’t more, especially for Mr. Cruz.”

Ken Rudolph, a volunteer with John Kasich’s campaign, manned a booth with his daughter Natalie. Rudolph said that this year marked his first time ever publically advocating for a presidential candidate.

“This is actually the first time we’ve caucused for a campaign, because we feel very strongly about John Kasich being the true conservative for the Republican party, as the actual adult in the race with a proven track record,” he said. “It’s really refreshing—if anyone has watched the 11 debates—to see how he’s stuck to the issues and hasn’t attacked other candidates. He’s the true unifier of the party.”

Rudolph said that while he appreciated the fact that the Kentucky GOP party’s early caucus meant that the state would have a greater impact in deciding the Republican nominee, he felt that the switch was not well publicized.

“I’m not originally from Kentucky, but my wife is. She’s been disappointed with Kentucky because they typically have the primary in June, and the nominees have basically been decided by then,” he said. “Quite honestly, though, the Republican party hasn’t done a very good job of communicating that there was a caucus. There was so much focus on Super Tuesday that a lot of people didn’t know this was happening.”

Though final turnout statistics are not yet available, caucus official Fay Haupt did say that she observed huge crowds of voters, despite some potential confusion about the change of location.

“I brought a book to read, but I haven’t gotten to touch it all day,” she said. “They were lined up the halls from 9:30 on. Between nine and 12, it was jam packed with people. I was very surprised, because this is our first caucus, and it’s new to everybody. There have been a few little problems, especially with some people who came but their names weren’t in the books. They had to go through a long procedure to find out where they were voting.”

A volunteer with Senator Marco Rubio’s campaign declined to be interviewed for this story. Stay tuned to RedEye for more updates from the ongoing 2016 election season.