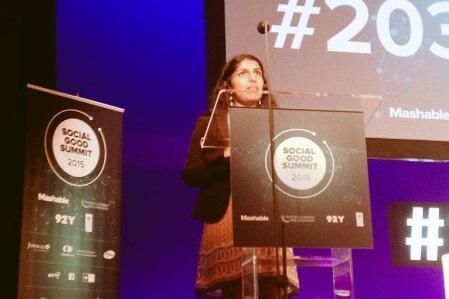 Vaannila Annadurai (11, MST) was recently named a national finalist in the 2016 MIT INSPIRE competition, the first high school research contest in the United States focused on the humanities, arts and social sciences.

INSPIRE participants first submit a research paper in one of 13 topic categories. As a finalist, Annadurai will present her project, entitled “Using Female Vocational Skill Programs to Improve Current Inefficiencies in Developmental Assistance” at MIT’s campus from April 3 to April 5.

Annadurai said that she initially heard about the competition in Ms. Alesia Williams’ (English) AP English Language and Composition class.

“We did a research paper in my English class, and my teacher encouraged us to use our papers to apply for the competition,” she said. “I found out on the night of the 25th right before I went to bed. I was in shock honestly because I applied on a whim. I was not at all expecting to get it. After I got past the shock, I became really excited to compete, but right now I’m feeling a little anxious for the competition.”

Students selected as winners after in-person presentations will be awarded cash prizes.

“I’m not sure what my chances are for winning, but honestly I just feel honored to have been selected,” Annadurai said. “In the chance that I were to win, I would win money which would help me afford college. I also feel that I would gain connections with mentors and other adults that could help me in the future.”

Though Annadurai is the only Kentucky student to make it to the final round of this year’s competition, Emily Hu (12, HSU) also advanced to in-person judging in the 2015 contest, ultimately winning the Science, Technology and Society category, as well as earning the Lincoln Community Choice Award.

Hu also conducted her research, entitled “Formulating and Implementing a Right to Be Forgotten in the United States: American Approaches to a Law of International Origin, ” in Williams’s English class.

“While at MIT, I loved touring the campus and participating in the activities leading up to the actual event—they had a panel discussion on the first day and several guest speakers,” she said. “The competition itself was relatively relaxing, since we would only get around one judge every 90 minutes or so … I think the best part of competition was the people. I met so many bright, kind, intelligent kids from all over the country, and I loved hearing about their research.”

Hu said that she drew on Manual’s extensive science fair resources to help her prepare for her presentation.