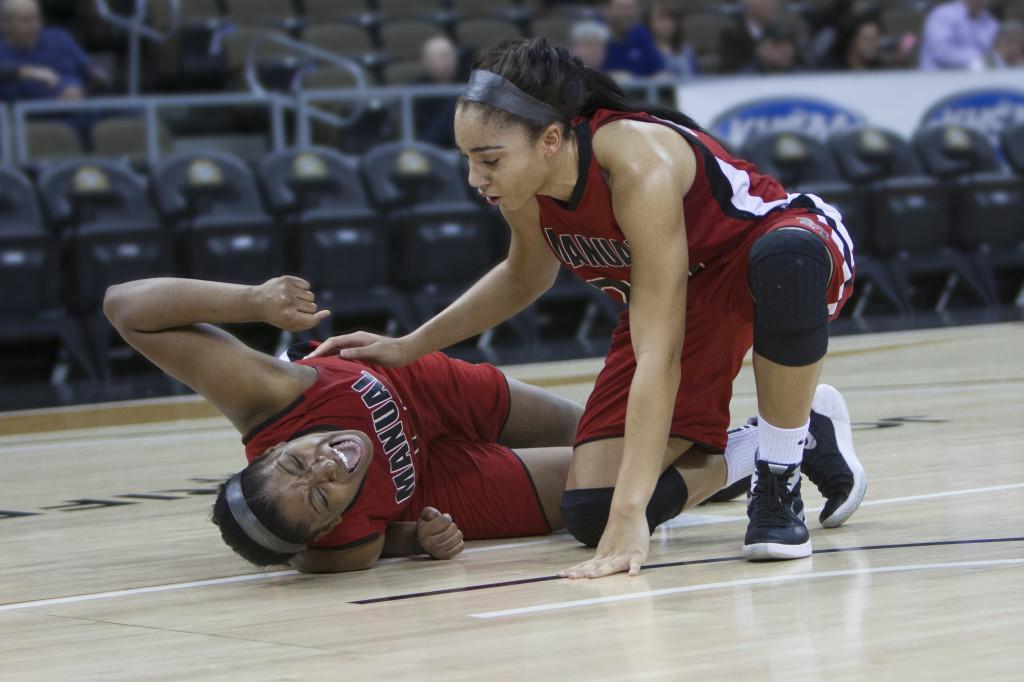 Manual center Krys McCune after injuring her knee at the 2:43 mark of the first quarter. Photo by Piper Cassetto

Manual center Krys McCune (12, #55) was working in the post when suddenly she made a move and fell to the floor. The BB&T Arena fell silent as the McDonald’s All-America and Miss Kentucky basketball nominee laid on the court in obvious pain.

“The first thing I thought was, ‘I can’t play any more,’ because the pain was so bad that I knew I wasn’t going to be able to play in the game,” McCune said in the postgame press conference. “I’m just really upset, because I couldn’t play and we lost. I’m just really sad right now.”

At the time, sixth-ranked Manual (21-8) held an 11-8 lead over seventh-ranked Murray (34-1) in the first round of the Girls’ Sweet 16 state tournament. But McCune, the heart and soul of the Lady Crimsons, would be done for the day.

“Krys is probably our best leader on and off the floor,” Ami Ballard (12, #11) said. “I knew that I had to step up and be a leader because as soon as Krys got hurt.”

McCune reportedly suffered a torn ACL on her right knee and will get an MRI Friday morning, per the Courier-Journal.

“My heart just goes out to her as a senior suffering that injury at the beginning of the game,” Head Coach Jeffery Sparks said.

The Lady Crimsons started the game on fire as they raced out to an 11-0 lead at the 4:29 mark of the first half; however, Murray would answer with back-to-back threes from Brittany Lawson (#2).

“Before the game I had been really nervous and wanted to do well for our team, but after making those first two shots I knew we were going to pull it through no matter what happened,” Lawson said.

Lawson’s shooting calmed down the Lady Tigers, who went on a 16-2 run to take a 16-13 lead in the middle of the second quarter while Manual was still reeling from the loss of McCune.

The Lady Crimsons answered by going on an 8-0 run of their own to take a 21-16 lead. Manual led 29-28 at halftime and looked like they might be able to do the impossible and overcome the loss of McCune. Manual’s hot shooting, the Lady Crimsons shot 54.5 percent in the first half, kept Manual in the game.

“They made huge shots in the first half, and for them to be able to play that well in the first half after she [McCune] went down, I know their hearts were broken for her,” Murray Head Coach Rechelle Turner said. “It just says a lot about those kids. You spend a lot of time with your teammates and I know that is a very difficult situation for them to go through.”

The second half, however, was a much different story. Murray ramped up their half-court trap, and it gave the Lady Crimsons fits. In the third quarter, Manual turned the ball over ten times, leading to ten of Murray’s 14 third quarter points.

“We picked up the intensity of our trap in the second half,” Turner said. “I feel like that was our adjustment. We were complacent about not getting the trap [in the first half], but once we really went after them we felt like we caused turnovers and that enabled us to get the baskets that we needed.”

“I think that in the second half when our defense touched almost every pass,” Murray center Maddie Waldrop (#21) said. “I knew the momentum shifted more once our girls just put everything on the line, got every rebound, touched every ball, and then of course pushing out on transition.”

The pressure caused Manual to collapse offensively. The Lady Crimsons took only seven shots in the third quarter, and only made one of them. The loss of McCune took a toll as the Lady Tigers began to dominate the paint, outscoring Manual 30 to 20 in the paint and 15 to 10 on second chance points.

“I think it was a combination,” Sparks said. “Murray did a great job defensively, which kind of took us out of our rhythm, forcing us into some turnovers. We just didn’t handle their pressure too well in the second half. To a certain extent, their minds were on that [McCune’s injury] but we tried to get them out of that and keep them in the moment as well as we could, and I thought that they fought and tried to do that, but you have to credit Murray’s defense for getting us out of our rhythm.”

Manual never recovered. Murray coasted to their first ever state tournament victory by a score of 58-41. The Lady Tigers outscored the Lady Crimsons 30-12 in the second half. Manual had 28 turnovers in the game, which resulted in 26 points for Murray off of those turnovers.

“With Murray, they did a good job of playing their half-court trap, which really made it difficult for us to get the ball past half-court and get into any rhythm there,” Sparks said. “They did a good job with it, we just gotta take better care of the ball in those situations to beat a great basketball team.”

Waldrop took advantage of McCune’s absence as she sliced the middle of the Manual defense and racked up a double-double with 22 points and 14 rebounds. Alexis Burpo (#32) added nine points and five boards and Macey Turley ( #5) added seven points and six assists for the Lady Tigers.

Ballard led Manual with 13 points and Jaela Johnson (10, #33) added 10 points, but also had 10 turnovers. Manual’s other star, Tonysha Curry (11, #23) only scored seven points on three of nine shooting to go along with seven turnovers before fouling out. No matter what the Lady Crimsons did, they could not overcome the loss of McCune.

“[After the injury] our whole bench was dead, the whole gym was dead, because we knew what a big aspect Krys was to our team,” Ballard said. “We just tried to step up, but we didn’t get the job done.”

Despite the fact that the Lady Crimsons ended their season on a sour note, Manual enjoyed a great season. The Lady Crimsons won the seventh region for the first time since 2012, and will likely finish as one of the top ten teams in Kentucky.

“Getting through the seventh region the way that we did and earning the chance to be here, that’s a lot to be proud of, and that’s what we told them in the locker room,” Sparks said. “The ride that they brought us as coaches on has been fun. It might not have been a fun moment right after the game, but the process and the ride has been fun, and I’m just so proud of them. They battled, they tried to come out of it, but again, you just credit Murray for doing what they needed to do to win the game.”