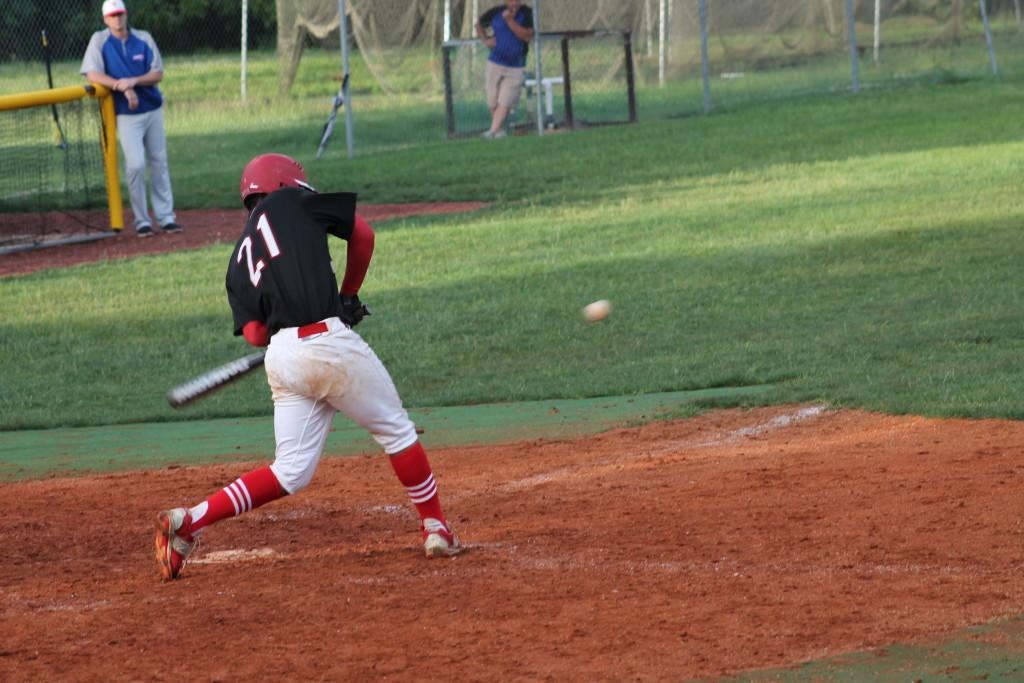 It was the top of the seventh inning and Manual got its chance to tie the game. The Crimsons were down 7-6 but had Matthew Olson, the potential tying run, standing just 90 feet away from home plate on third base and, with just one out, cleanup hitter Sam Clinard standing in the batter’s box. Yes, Manual had it’s chance; however, the Crimsons could not take advantage of it. Clinard struck out, as did pinch hitter Brennan Poole (12, #20) to end the ball game in a 7-6 heartbreaker to St. X.

“Well, I think these types of situations where the kids haven’t had much success, we put ourselves in chances to win ballgames, but we just came up short a couple of times,” Manual Head Coach Matt Timbario said. “Now, I told them to use this as an experience to know that the next time this happens, we know what we need to do to win the ballgame.”

The Crimsons jumped out to an early 2-0 lead in the top of the first inning when Olson and Chris Gambert (12, #25) scored on an error and a wild pitch, respectively. After Olson, who was also Manual’s starting pitcher in the game, gave up an RBI single to Casey Simon (#2) in the bottom of the third, Manual expanded their lead to 4-1 after Riley Noe (11, #4) smashed a two RBI double in the top of the fourth. Noe had a strong at night the plate for Manual, as he collected two hits and added three RBIs.

“Coach really got into my head before that first at bat and it kind of worked well from there,” Noe said.

Olson was strong on the mound throughout the first three innings, only giving up one run on one hit.

“I just tried to get ahead early and throw a lot of strikes. That’s all I have to do. I know that I got a good defense behind me, so I know that if I throw strikes and get ground balls or pop flys I know they got it.”

“He did well,” Timbario said of Olson. “We had a gameplan to kind of pitch backward in counts. Instead of throwing fastballs in fastball counts we threw off speed; it kind of kept their hitters off balanced a little bit and we were able to take that lead and hold onto it for four innings.”

However, Olson seemed to run out of gas in the fourth inning.

“Our starting pitcher, at this point of the season we don’t want to run him out there and have him throw 100, 120 pitches, but we’ve seen the way that Matthew Olson’s pitched in years past; right around that 75 pitch mark is where we’d like to see him get to, he usually hits a wall right about there, so that was the case tonight,” Timbario said. “We felt like making a move, and sometimes it just doesn’t go your way.”

The Crimsons seemed to fall apart in the bottom of the fourth, and after Olson hit Zeke Porta (#21), and gave up an RBI single to Kurt Ramser (#7), Timbario had seen enough and pulled Olson in favor of Graham Christian (12, #7). Olson finished the day by giving up four runs on two hits, five walks and one error on 83 pitches in three and a third innings. Olson also had a huge day at the plate with his four hits and one run scored.

“We just started getting lazy a little bit [in the fourth inning],” Olson said. “We walked a lot of batters and got down in the count instead of getting ahead, and it just kind of got away from us; we couldn’t stop the bleeding.”

Even after replacing Olson on the mound, Manual could not stop the bleeding, and after Christian gave up a three RBI triple to Simon, Manual’s lead was gone. All in all, the Crimsons gave up six runs in the bottom of the fourth, as they saw their 4-1 lead turn into a 7-4 deficit in all of 36 minutes.

Manual would not go down without a fight,though, as the Crimsons battled back in the top of the sixth when Noe crushed a RBI triple and then scored on a Quintin Bynum (11, #13) sacrifice fly to bring Manual within one at 7-6. Ryan Anglin (12, #30) was able to hold the Tiger offense at bay to give the Crimsons their chance in the seventh, but it was not enough as the Crimsons fell short.

Finishing close games has been an issue for Manual (4-5) in their young season. In fact, Manual has lost its five games by a combined six runs. The Crimsons are close to getting quality victories, but have yet to get over the hump.

“Knowing that they don’t want to feel this type of feeling at the end of seven innings, we’ve got to find a way to win,” Timbario said. “Nine games in, we’ve got to know that we don’t want this to happen to us. This was a good experience for our guys, and I’m proud of them; they played well tonight.”

Playing close games against teams such as St. X can be a confidence builder for the Crimsons, even if they don’t win the game.

“They [St. X] are a top five team with a really good squad, a good pitching staff, so it really gives us a lot of confidence for the big games that we have coming up,” Olson said.

Manual will once again go for a signature win at home on Thursday at 6:30 p.m. when the Crimsons host defending sixth region champs North Bullitt at Derby City Field. Manual also has a huge showdown looming when they host Male on Wednesday March 30, also at 6:30 p.m. at Derby City.