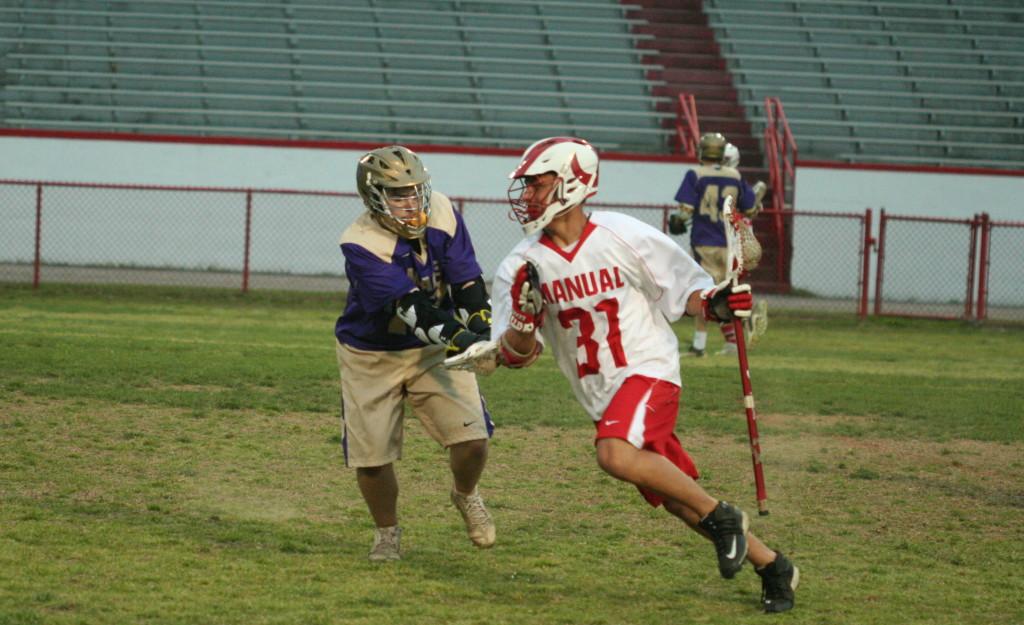 In the past three games, the duPont Manual Boys’ lacrosse team was on fire.

There was more of the same tonight. Except it was the other way around.

The team never got control of their opponent South Oldham tonight and the Dragons dispatched the Crimsons 8-4.

After the Crimsons struck first with an Owen Gant (11, #9) goal early in the first quarter, it looked like the team was going to cruise again.

The Dragons were not though like the other three teams Manual faced. They did not lie down.

They buckled down and turned up the intensity in all facets of the game especially on offense.

The Crimsons were outscored 5-1 in the first half after the Gant goal and they were never able to recover from the run.

The Dragons were able to exploit gaps and capitalize on careless Manual errors which eventually lead to goals.

“We had way too many turnovers, unforced passes, TJ Williams (12, #1) said. We did not work on the fundamentals which is very mandatory in a sport like this and most of those turnovers could have been easily avoided.”

The Crimsons had been scoring in double digits in their games going into tonight, but the Dragon goalie had other ideas only letting the explosive Crimsons net four goals and stopping multiple rocket shots.

That was something tonight that frustrated the Crimsons, not capitalizing on opportunities.

Williams believes that the practices the team had going into tonight led to the poor performance.

“In the last two practices beforehand we did not have the intensity and focus of a game ready team and we showed it today,” Williams said.

The Crimsons are back down to earth after their 3-0 start and must get refocused quickly as they hit the road with a matchup against Christian Academy of Louisville on Saturday.

The Centurions and Crimsons game will start at 1:00 on Saturday at North Field.