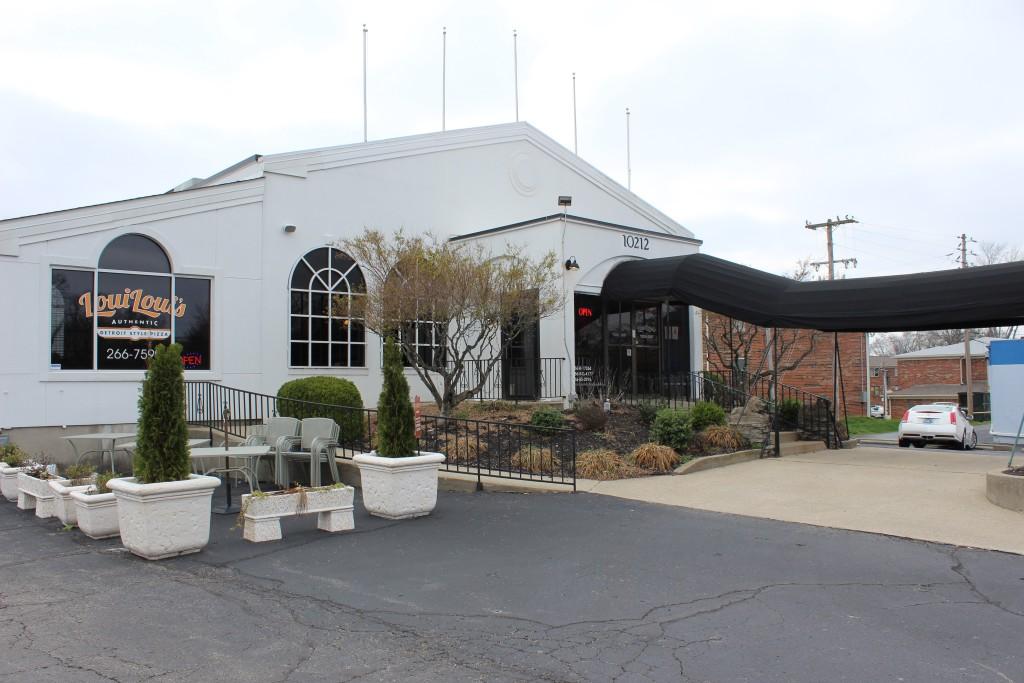 The exterior of Loui Loui's on Taylorsville Road. Photo by Olivia Evans.

O Squared Eats is a series of food reviews based on quality, affordability and accessibility to teens, brought to you by RedEye staffers Olivia Dawson and Olivia Evans. This review is of Loui Loui’s in Jeffersontown.

Loui Loui’s is a quaint little restaurant down Taylorsville Road in J-Town. It is an old house turned into a restaurant made up of several small, individual dining rooms. Both small rooms are accompanied by small television sets, a few tables and lounge chairs, while the main room contained a number of comfortable tables and booths, along with a full bar and television sets. All three rooms were plastered with old black and white canvas photos. In the background played some light music, mostly consisting of alternative artists like Cage the Elephant and Paramore. While the restaurant’s lighting was very dim, it was counteracted by the natural light coming in from the huge windows up front.

We visited Loui Loui’s around 4:30 p.m. on a Friday afternoon (this was part of the early bird special which is from 3:00-5:30 p.m. on Tuesday-Saturday). Despite the relatively empty building, the service was still pretty slow. We placed our order for our appetizers and then waited nearly 15 minutes for them to come out. The same was true for our entrees, which took 30-35 minutes after we ordered before they arrived from the kitchen. I took notice that the wait staff was sitting around at the bar and socializing with each other for most of our visit. The wait staff also seemed passive-aggressive towards the customers. While they mostly tried to be friendly and cordial, they would sometimes make a rude joke or comment.

Loui Loui’s is an ideal scene for a group of pals going to catch a game with the many TVs. Any pizza parlor is conducive to teen hangouts, and Loui Loui’s is no different. It is also a nice place to go for a casual date with your significant other. Loui Loui’s offers rentals for parties and events, but we wouldn’t recommend this intimate setting for a large group. The restaurant offers free wifi; yet it was almost impossible to connect to. Loui Loui’s also had a nice area for the live music that they host regularly during the prime dinner time on weekends.

Despite its flaws, Loui Loui’s was cleaner than the average pizza place, with no crumbs in sight. Part of this was probably due to the fact that the tables lacked the messy parmesan shakers that other pizzerias provide. Another problem was that, for an Italian place offering food doused in marinara or covered in grease, there were no extra napkins at the tables, and the wait staff never offered them to us (though we desperately needed them). However, each table had customer satisfaction cards to fill out and leave behind after your meal.

Olivia Dawson: I ordered the pepperoni and garlic breadsticks as an appetizer. It was not a very good value at $7.99 for about six pieces that were each about four inches long. They were basically miniature calzones, with cheese and pepperoni inside a thick layer of dough. They had a tangy, meaty flavor and were pretty tasty. In fact, I would rather eat these than any of the entrees on the menu. I ordered the oven-baked Lasagna ($8.99 with the Early Bird Special, $14.99 without) for my entree because they were marked on the menu as a favorite, but that steered me in the wrong direction. The lasagna was served in the same dish it was baked in, so it was crisp around the edges. I was expecting it to still be warm, but it was already cold by the time it reached the table. The lasagna fell apart at my first bite, making it more like eating a pot pie than a pasta dish. Each entree comes with a side salad, so I tried the house salad with ranch dressing. I assumed that certainly they would have a decent salad; however, the lettuce was dehydrated and there were no other vegetables mixed in. I would rate my experience a 3 out of 5 stars because even though the appetizer and atmosphere were good, the pasta was overrated and the overall service was weak.

Olivia Evans: I ordered the polpettini meatballs with warm ricotta ($14.99) as my appetizer. The meatballs were about the size of a fist and seasoned well. The marinara sauce had a much stronger tomato taste than most traditional sweet sauces. The breadsticks were crisp on the outside while remaining light and fluffy on the inside and were topped off with a light cheese dusting. All the meals came out in family size portions, which would be beneficial for large groups or families dining out. For my main course I ordered one of their signature four square pizzas. I had the Great White Pizza ($14.49) which was below average. The crust was burnt all the way around and blackened on the bottom, which made it very difficult to chew. Another flaw of the pizza is that it was overly greasy. Finally, all the toppings were very chunky and clustered together. However, Loui Loui’s pizza is “Detroit-style.” While this may have been a poor execution of Detroit-style pizza, it is also possible that, seeing as how this is something I’ve never tried before, I may just not like the style. All in all, Loui Loui’s is a less than desirable place to eat at and I would rate my experience a 2 out of 5 stars.