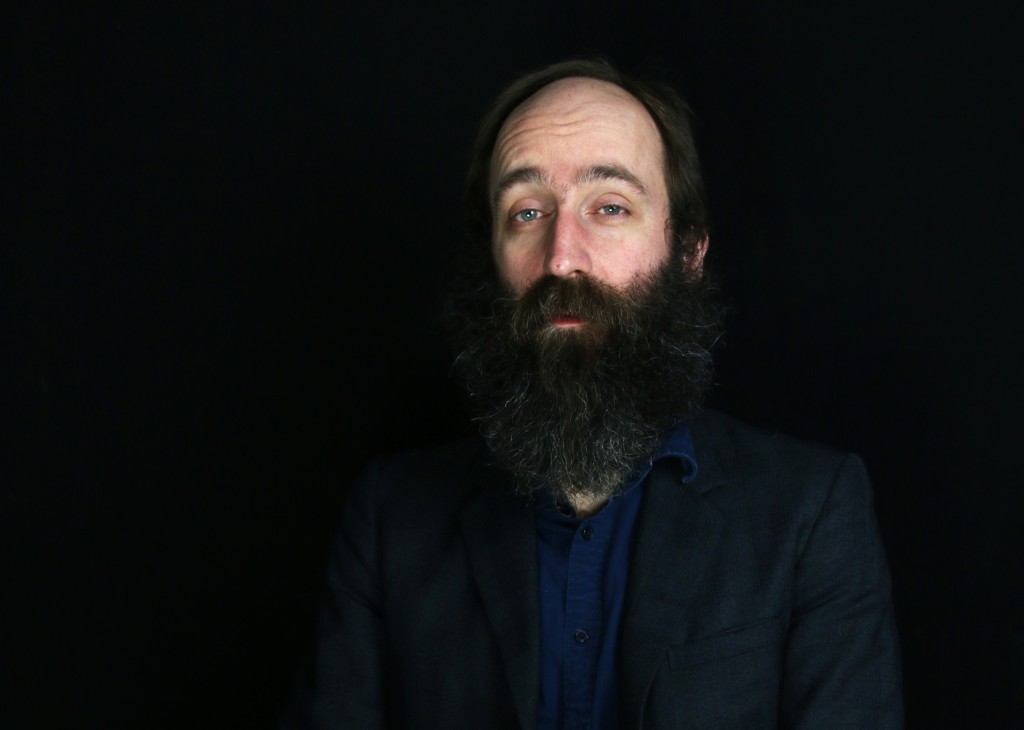 In the latest of RedEye’s ongoing series of teacher profiles, Mr. Kristafer Abplanalp (English and Journalism)—known to most of his students as Mr. A—discusses his interests outside of the classroom, including the local food scene, music and film.

Q: What are some of your favorite restaurants in Louisville?

A: I love the $2 tacos at El Molcajete on Fourth Street; the fried chicken at Big Mama’s Soul Food; the fried chicken wings at Shirley Mae’s; the Mediterranean-style fish tacos and baklava at Zad; the hamburgers at Jack Fry’s, Holy Grail and Eiderdown; the pepperoni, garlic and feta pizza at The Post; the falafel and pita at Alwatan; the cheese and charcuterie board at Wiltshire on Market; the pho at Cafe Thuy Van; the Vietnamese sandwich and jicama rolls at Heart and Soy; the breakfast croissant at Ghyslain; the barbecue at Shack in the Back; the fish sandwich at The Irish Rover; the steak-gorgonzola salad at The Comeback Inn; the buffet at Dakshin; the midnight burritos from New Wave Burritos; the 24 hour diner-dinge of both Barbara Lee’s and Juanita’s Burger Boy; everything at Queen of Sheba; any sandwich at Morris’s Deli; the Korean barbecue ribs at Charmin; the bulgogi at Lee’s Korean; the sushi at Dragon King’s Daughter; just about any doughnut from Nord’s Bakery.

I particularly love that you have to order with confidence at Big Mama’s Soul Food because when you place your order, you do so by speaking into a microphone that is amplified throughout the entire building for everyone to hear.

Q: What are some of your favorite dinners to cook for another person?

A: When I have time, I love to cook. While I do reference recipes for various spice pairings, I’m not much for following recipes. I prefer to figure it out as I go. My favorite grocery store is Viet Hoa Food Market. There, I often find great curry pastes and Szechuan peppercorns. Cooking with real Szechuan peppercorns is a bit tricky because if you over do it you end up with a black liquorice taste that will ruin your meal.  But, if you find the right combination, you end up with a heat-induced sizzling-in-your-mouth sensation that is pretty unlike anything else. The sensation is almost comparable to candies called pop-rocks, but you know, not gross like pop rocks.

Q: What’s a book that you’ve recently read and enjoyed?

A: Topping the heap of books near my nightstand right now is Ta-Nehisi Coates’ Between the World and Me. This would be a great book for just about anyone to read.

Q: What are books you wished you had the chance to teach in your AP Literature classes?

A: If I’m privileged enough to teach AP Literature next year, I’ll probably add Margaret Atwood’s Alias Grace, Ralph Ellison’s Invisible Man, Don DeLillo’s White Noise, and Ivan Turgenev’s Fathers and Sons.  As for all classes at Manual, there is always a tug of war between depth and breadth. In a Literature course, do you go really deep into a few texts or cover a wider variety of disparate texts?  This is a tough call. For a few decades now in the world of academia throughout America there has been a rift within English departments between Rhetoric Composition and Literature. Composition has clearly won out in our instrumental-reason driven culture. That said, this seems to be a rather staid-binary, a false-dichotomy. Clearly both are very valuable. I’d love for our culture in this country to embrace both, and for our students to be able to expand their shared reference points when it comes to classic literature. Who deems something “canonical” or “classic” is of course controversial, but I am a believer in both the merits of classic literature and simultaneously in the importance of studying a diverse number of perspectives—not just texts written by dead white men. But I do think it is a mistake to throw out the cannon altogether. Student choice is also very important, but very hard to effectively build into the curriculum. I’d like to find a way to construct a meaningful and rigorous independent reading unit.

Q: Do you still purchase physical books or are you a fan of e-readers?

A: I worked for about 10 years in an academic library, and to me libraries full of books are as about as restorative as a trip to Red River Gorge. That said, I’m no purist: I love the idea of people reading, no matter what the medium. It is hard to imagine a democracy existing without a literate populace. Today’s high school aged generation is probably reading and writing more than any previous generation since time immemorial thanks to tweets, texts, etcetera. I do think that the ability to flex the ‘power-browse’ muscle of one’s brain is great, and yet this is quite different than training one’s brain to have enough ‘endurance and stamina’ to patiently focus, contemplate, and connect the dots when faced with big-picture problems. Technology, so far, seems really effective at enhancing the former, but not so much the latter of these modes.  Reading an actual (not virtual) book, in a quiet, well-lighted place, is a great way to address the latter. Cross-training—engaging both modes—is perhaps best.

Q: What are some books you enjoyed in your teenage years?  Do they still hold up now?

A: My great-uncle went to high school in Indianapolis with Kurt Vonnegut. He straddles the teenage/adult divide quite well. Through my high school interest in Allen Ginsberg, I really grew to love Walt Whitman. The largeness of his heart and depth and grandness of vision is perfected paired with an endlessly accommodating language. Jack Kerouac lead me to Malcolm Lowry’s Under the Volcano. I can still remember where I was when I read Lowry’s scene that takes place in a toilet: the main character observes a swarm of insects whose antennae start to twitch toward him, and he starts to read in their small movements a private code spelling out a very ominous warning. How strange and mesmerizing, still today. Like Lowry, Kentucky author Ed McClanahan only wrote one good book, but it was a doozy: Famous People I Have Known.  Imagine Mark Twain writing about living through the 1960’s american counterculture, and you basically have this book, which was really important to me as a teenager because McClanahan lived nearby my very small, secluded backwater home town. He was the first “real life author” I met in the flesh. He was really, really funny, and a heck of a good story teller. It’s been a long time, but I venture to guess this book holds up, yes.

Q: What are some films you’re looking forward to?

A: Anything playing at the Speed. The Speed Museum’s new cinema is essentially Louisville’s first arthouse movie theater in a very long time. Of the hundred most visited museums in the world, only 10 of them have film curators. We are very lucky to have one here. After the closing of Wild and Woolly Video last year, community-based access to film outside the Hollywood circuit has been virtually non-existent.

Q: What have you been listening to lately?

A: For the first time in my life while living in Louisville, I am excited about music I’m hearing on the radio. WXOX LP, 97.1 on the FM dial, is great. They only broadcast within a radius that is essentially inside of the Watterson Expressway, but you can also stream it through their ArtxFm app. This is true free-form, advertisement-free, community-radio. I don’t love every show, but I do love that if you tune in long enough, you can probably hear just about anything.

Q: Why do you still collect records even though there are more advanced/compact music technologies?  What is appealing about records?

A: Great music is a message that transcends any medium and I’ll listen to just about anything on any medium. When it comes to vinyl, I’m far from a purist, but I don’t know if any of the new advanced mediums sound any better than a clean record played through a really good stereo.  A lot of advanced mediums actually sound worse when you consider the quality of an MP3 or of an iPhone speaker. Perhaps vinyl has made a bit of a resurgence in the last 7 years as a sort of pendulum swing in response to the intangible cloud, the digital file en masse.

What do I like about vinyl? I like listening to a series of songs intentionally placed and paced together to tell a story—an album. Some of my favorite pieces of visual art have been record covers of the last 65 years. Material possessions can take control of their owners, but there is something to be said about making room for objects imbued with meaning. To love a record enough to allow it to take up space in your house, physically, can be cozy.

Since I am now probably sounding like an old grandpa at this point, let me say that there was also something to be said about the great searching that used to go into tracking down records.  Much of my youth was consumed with trekking around the Midwest and South tracking down record collectors—often older eccentric hermetic types. Some of these guys became surrogate grandfather figures, friends, and primary sources who could tell stories about really wonderful segments of 20th century history. An old Irish man who originally moved to america to work with horses not only sold me my first Captain Beefheart record, but also told very vivid stories about living in New York City in the ’70s.  A German-American businessman sold shelves full of European albums from the ’60s and ’70s out of his basement to friends and I for next to nothing, and he also told us first hand accounts about what it was like to grow up in Germany through the ’60s and ’70s.

There was a small, three building township in southern Kentucky with a post office that also had a room full of 78 rpms. The postmaster, who was about 90, was the original fan club leader of the Carter Family. The place was a veritable museum of early country music.  There were records everywhere. People would come in to get their mail, catch up on local gossip, and, I realized after a while, some were also renting adult vhs movies, which were covertly stored in a closet in the bathroom. The first time I visited, a man sat down near the counter, pulled out of a bag and proceeded to eat what he said was a turkey leg, but I swear it was well over a foot long.  He gnawed on it very loudly for what seemed like an hour. The search for music used to be mediated by experiences that are much different than taking two seconds to search out an album in youtube. I’m not saying one is categorically better than the other, but they sure are different.

Q: What do you want your students to get out of your class?

A: Beyond being well prepared for various accountability assessments of course, I truly hope it is obvious that I care about them, as people, not just in relation to how they are doing in class.  I hope it is obvious that I love what I’m teaching and that whether the live the material or not that I am modelling for them the pleasures of being a lifelong learner.  When you read a history book or the news reports it is sometimes hard to believe, but I do think that Aristotle got it right when he stated something along the lines of “All human beings desire to know.” Hopefully teachers can teach others to teach themselves, and can foster curiosity and wonder about the world.