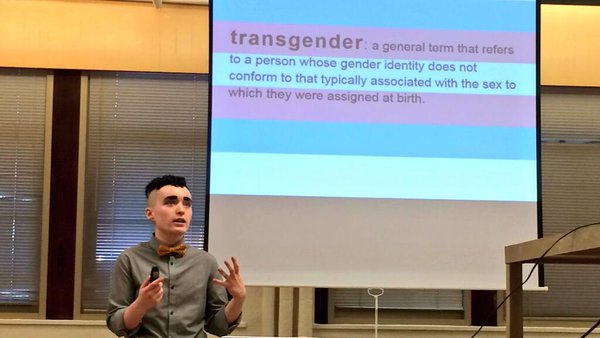 Oberon Coverdale of the duPont GSTA speaks to the faculty about trans issues and concepts.

The members of Manual’s Gay Straight Transgender Alliance (GSTA) will be participating in a national Day of Silence tomorrow to protest anti-LGBT+ harassment in schools.

Founded in 1996 by the Gay Lesbian Straight Education Network (GLSEN), the Day of Silence seeks to call attention to the silencing effect of bullying on LGBT+ students. Students who choose to participate generally elect not to speak throughout the duration of the school day.

GSTA Vice President Rowan Little (11, J&C) said that though the GSTA is not formally organizing any kind of Day of Silence activity, many club members are choosing to participate individually.

“Our normal protocol is that we let students decide for themselves if they want to participate or not, and we encourage them to tell their teachers ahead of time if they plan to participate, or at least carry around a piece of paper to say why they’re doing it,” Little said.

According to Little, students participating in the Day of Silence generally do still engage in mandated classroom activities.

“If a teacher asks that they participate in a class discussion or something related, of course, they have to talk, but other conversations should wait until after school, when the Day of Silence ends,” they said.

Despite the difficulty of remaining silent all day in a school environment, Little said that they think the campaign effectively brings awareness to the problem of anti-LGBT+ harassment.

“I think it’s effective just because in schools we are so used to everyone talking constantly that when someone chooses to stay silent it raises questions,” Little said. “Those questions lead to research which can educate students on these issues. The fact that it’s so widespread and nationwide also helps.”