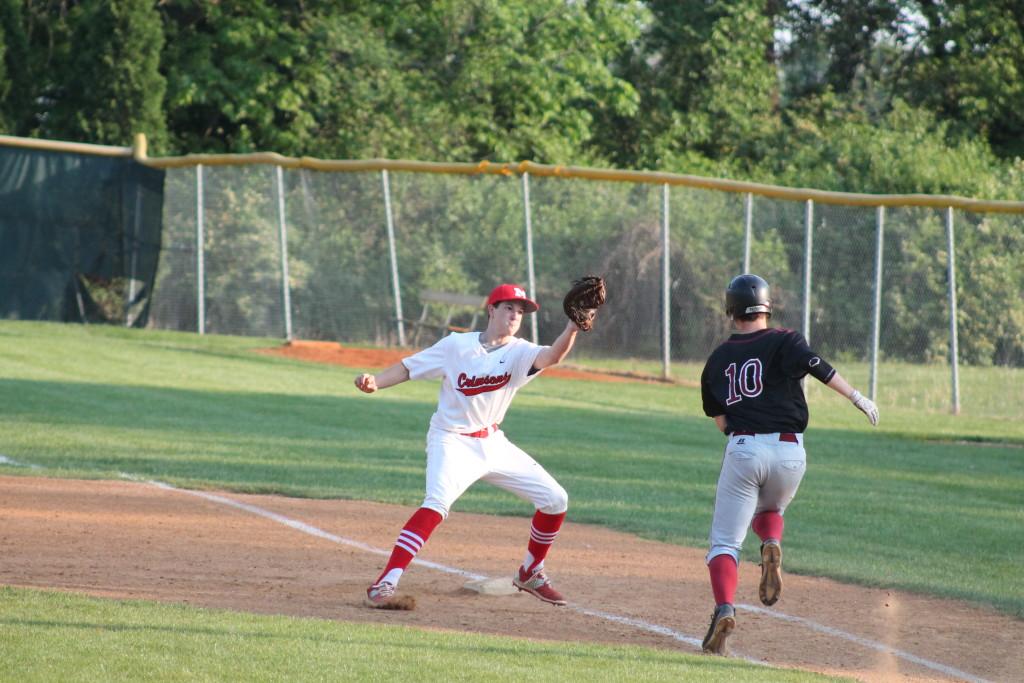 In the top of the fifth inning, Manual was trying to provide the spark it needed to get back into the game. The Crimsons trailed Ballard 8-1, but had the bases loaded with just one out, and with cleanup hitter Chris Gambert (12, #25) at the plate. Gambert drilled a line drive to the right side of the infield, and it looked as if Manual was about to get at least two runs home. However, Bruin second basemen Wil Barman (12, #10), who already had made a sliding catch to rob Kam Davis (12, #21) of a hit, had other ideas. Barman took multiple steps to his right then leaped to make a diving catch to rob Gambert. Barman then hopped back up and doubled up Aaron Sary (10, #32) at first to end the inning.

“I just went to the ball, found my glove, and just went to where the ball took me and I made the play,” Barman said. “Getting those stops limited what they could do and it built our momentum. So it kept us going through the whole game.”

Barman’s snag to rob Gambert effectively sealed the game for the Bruins, as Manual never threatened to get back into the game again and fell to Ballard 8-1.

Ballard was able to get on the board in the second inning as the Bruins used a pair of leadoff hits and a walk to load the bases against Manual pitcher Sam Clinard (12, #22). Barman and Jackson Millhollan (#11) both drew walks and Jordan Gunter (#9) hit a sacrifice fly to give Ballard an early 3-0 lead.

“In the second inning I just walked a lot of batters and got down early,” Clinard said. “After that, they broke it open.”

After Manual got a run in the top of the fourth inning, when Sary scored on a Graham Christian (12, #7) infield single, the Crimsons finally had some momentum; however, it didn’t last long as Ballard broke the game open for good in the bottom of the fourth.

“They just executed,” Clinard said. “They had a hit a run that went right in the gap when we tried to get their guy stealing, and they bunted at the end of my pitching.”

Ballard used a pair of hit and runs to get runners on base, and after Millhollan hit a RBI single, Gunter bunted for a base hit score Barman, which gave Ballard lead 6-1 and ended Clinard’s night.. The Bruins would add two more runs in the inning then coast to the 8-1 victory.

“We called a bunch of hit and runs, and we executed for probably the first time all season, and we put the bat on the ball during the hit and run and it went in our favor,” Barman said.

Throughout the game, Ballard consistently got their leadoff runner on base. The Bruin leadoff hitter reached base four times, and Ballard scored at least one run in three of those innings: three runs in the second, one in the third and four in the fourth. When the Bruins got the leadoff hitter on base, Manual seemed to panic defensively, which caused the Crimsons to play tight, and for Ballard to take full advantage.

“For us defensively, we just have to keep playing. We can’t let ‘Oh no here we go again’ stay in our heads,” Manual Head Coach Matt Timbario said. “We’re at the halfway point in our season, and we’ve got to get over that hump. With this team, I still think that we have all the pieces to compete for a seventh region title, we’ve just got to keep going at it.”

Manual also struggled to hit the ball, as the Crimsons only collected three hits against Ballard. After only getting one hit in a 4-0 loss to Butler on Wednesday, Manual has only managed four hits in the past two games.

“In the past two games we’ve really struggled hitting, and tomorrow I think we’ll take a lot of BP [batting practice],” Clinard said. “Chris [Gambert] hit one hard, but it turned into a double play. Other than that, we didn’t really hit that well, so I think we need to just execute during our at bats.”

Even with the low hit totals, Timbario remains optimistic.

“Yesterday [against Butler], I think that we were taking too many strikes, too many good pitches. Today, we hit the ball right at guys and their guys made some plays. We need to keep doing what we’ve been doing,” Timbario said. “ Our guys hit the ball on the money, but we got picked off to end an inning when we had the bases loaded, Chris hit that ball pretty hard but that guy made a play. I feel like that Ballard just came out, executed and handled their business. They were the better team tonight.”

Ballard played a complete game to knock off Manual.

“We put the bat on the ball and kept our strikeouts low,” Barman said. “We’ve been averaging over five strikeouts a game, and today we only had two strikeouts, and we kept it clean with the errors; we only had one error in the whole game. We’ve also been giving up runs in the first [inning], and we kept that down too.”

Even though Manual is just 9-10, the Crimsons record is not as indicative of how good the team really is due to Manual’s strength of schedule. The Crimsons still believe that they can reach their postseason goals, and hope that they can learn from the loss to Ballard.

“[Ballard] is probably the top team in our region, they’ve got some guys healthy and they’re getting their full lineup back together,” Timbario said. “So we know what’s out there, and we’re not going to back down from them. We beat them last year and we saw what they had tonight, and if this is the best in the seventh region, then we know what we’ve gotta do to win.”

The Crimsons will be back in action on Saturday when Manual travels to Marion County. First pitch is scheduled for 1 p.m.