Hillary Clinton’s husband campaigns for her in Louisville 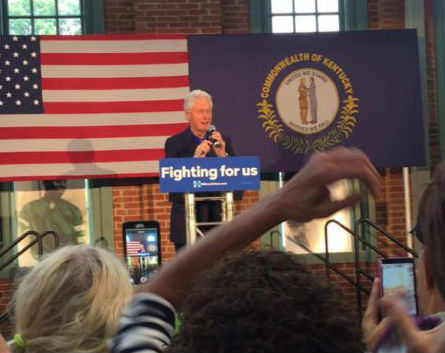 While Democratic presidential nominee Hillary Clinton stopped by Ohio on Tuesday, May 3, Bill Clinton visited the Kentucky Center for African American Heritage to campaign for his wife. The engagement came just in time for Kentucky’s Democratic primary election, which will take place on May 17. Bill Clinton will also make stops in Lexington and Morehead in the coming days.

Several Manual students attended the event, both in support of the Clinton campaign and also simply to hear a former president speak. Kylie Milliken (12, HSU) even had the opportunity to shake Clinton’s hand.

“The crowd was pretty small, so I got to stand really close to the guard rail even though I got there super late because of the AP Physics test,” she said. “After he finished talking, he walked down the rail and shook hands with people. It was pretty cool—not something I expected to do when I woke up this morning.”

“I have always been a fan of the Clintons, and I support Hillary and will be voting for her at the primary coming up,” Kumar said. “Also it was awesome to see him speak and shake his hand.”

Kumar said that she believed Bill Clinton’s speech could have swayed the opinions of Bernie Sanders supporters.

“He is a very good speaker. I feel like people either hate Hillary or love her,” she said. “The Bernie people tend to be really close-minded, and I feel like they wouldn’t really have paid much attention. Bernie is really radical, but Hillary is also a strong Democrat but way more moderate. If the Bernie Sanders supporters actually listened to his speech I feel like they would be swayed toward Hillary.”

Milliken said that though she was a fan of both Sanders and Clinton, she is currently leaning more toward the latter.

“I actually really like all of Bernie’s ideas, but he is too far to the left. I don’t personally think any candidate on the fringes of the political spectrum would be a great president because leaders are supposed to unite people and a really ideological president would split the country even more along party lines,” Milliken said. “I think Hillary and her ideas are a bit more realistic and less extreme than Bernie, especially because she has more experience. If Bernie were president, nothing would get done. Congress is reluctant enough to let Obama do anything, and he’s nowhere near as far left as Bernie is. We wouldn’t be able to make much progress with such a strongly divided government, and I think it might distance possible future Democratic voters if we had four unproductive years with a very liberal president.”

In past elections, Kentucky voters have solidly favored the Clintons. In 2008, Hillary Clinton defeated Barack Obama in the state’s Democratic primary, and Bill Clinton is the last Democrat to win the general election in Kentucky.