This Week in Manual Athletics: May 8 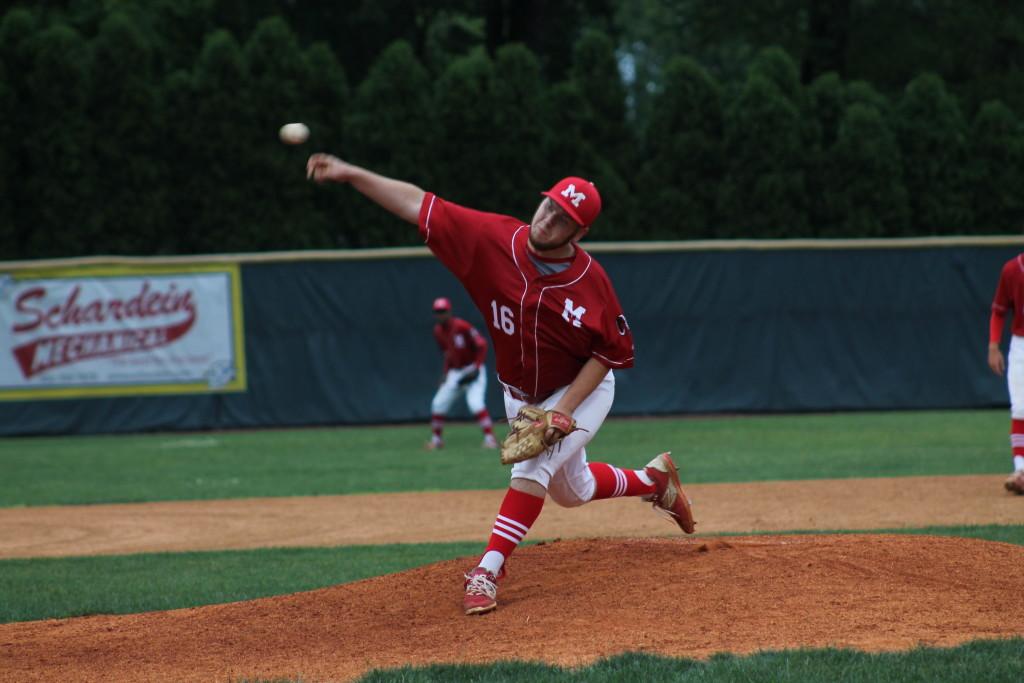 Brian Hoffman (11, #16) throws out a pitch in the fifth inning. Hoffman acted as the closer to seal the perfect game after the coaches decided to rest Olson's shoulder.

The team had a tough week going 0-2 with losses coming against Eastern 4-2 and then a marathon game against Bullitt East where finally in the 11th inning, the Chargers were able to put three runs on the board in the top half of the frame. Manual had one last shot to make a comeback but it was not meant to be and they fell 9-6. Tournament time is coming up and if the Crimsons do not step it up, it could be an early exit for the team. Manual now turns their attention to a home matchup with KCD on Monday. First pitch set for 6:30 p.m.

Manual went 1-0 this week. The 4-0 win over Presentation was a huge win as it secured the Crimson with number one seed in the district tournament. Ever since their spring break Disney trip, the team has been on a roll soundly defeating teams. If this can continue into postseason play, the Crimsons could be a dangerous team and challenge many of the other top teams. They now await a home matchup against Collins on Tuesday at 6:00 p.m.

The Crimsons had a nice week on the field going 2-1. On Monday they went on the road and defeated Eastern 7-6. The very next day, they were back at home but fell to bitter rival Male 9-5. The team redeemed itself though when they defeated North Oldham on Wednesday 10-8. That concludes the regular season for them as they finished with 10 wins and 7 losses. They can now get ready for Regional play. Matchup and time to be announced.

Manual unfortunately had their team season ended on Monday by St. Xavier 3-0 in the Sixth Region Championship. Although this concluded the team season, there is still the singles and doubles Regional Championships where many Crimsons have qualified. Although it is a tough loss, a trip to the championship for the young Crimsons is a big step forward and the future looks bright.

It was a thrilling week on the court for the team as they blasted bitter rival Male in the Sixth Region Championship match to advance to the team State Championships on May 14-15 in Lexington, KY. If the team can play like they did against Male, they could be a sleeper team to win it all. Their matchup and time will be announced soon.

Several of Manual’s best runners took to the track on Friday at the St. Xavier Dream Mile at St. Xavier High School. On the boys side, Yared Nguse (10) took second place with an outstanding time of 4:14.92 which is also his personal record and now a school record. The girls side was equally or even more impressive as Manual put two runners on the victory stand. Alena Sapienza-Wright (10) finished third with a time of 4:57.55 which shatters the Manual record by four seconds. Emma Kuntz (12) placed fifth with a time of 5:09.13 which also is her new personal record. The team now prepares for the Louisville Meet of Champions on Tuesday at Fern Creek High School. Time to be announced.