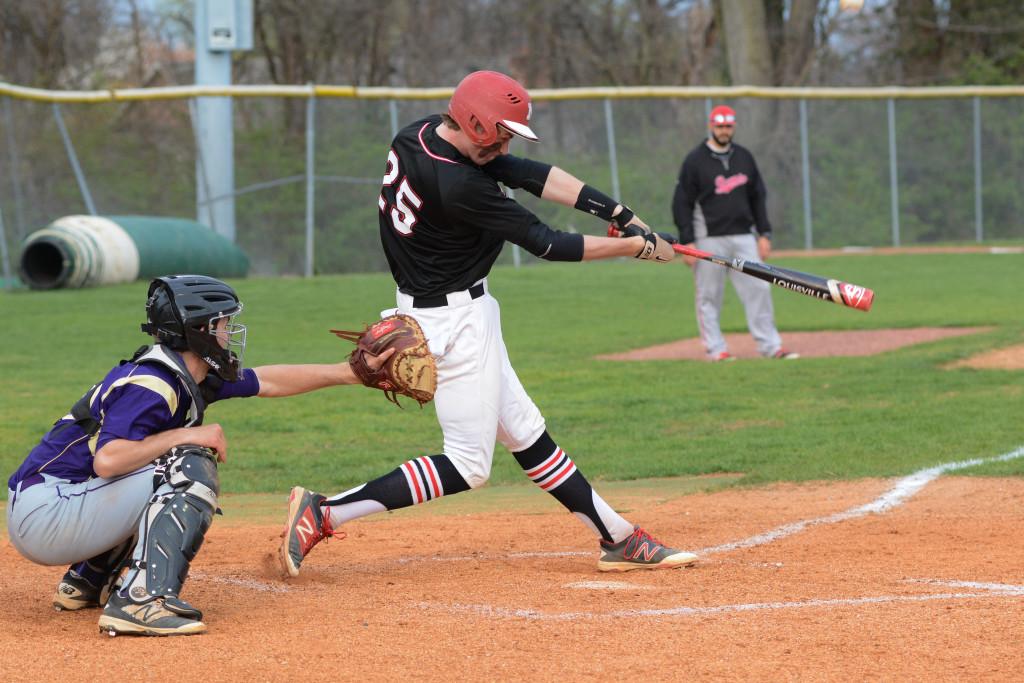 In the bottom of the third inning, the Crimsons needed a base runner. Over the first two innings, Manual had been befuddled by KCD pitcher Aaron Lattis (#17). However, when second basemen Quintin Bynum (11, #13) stepped into the batter’s box, the complexion of the game changed.

On the first pitch of the inning, Bynum squared and bunted for a base hit. After Bynum’s bunt, Riley Noe also had a bunt single that was so perfectly placed between a charging pitcher and first baseman, as well as the second basemen that was holding Bynum on second, that the bunt allowed Bynum to score all the way from second base on a ball that didn’t threaten to leave the infield. Manual’s use of small ball became part of Head Coach Matt Timbario’s gameplan during the pregame warmups.

“That happened in pregame,” Timbario said. “When we watch the other team take pregame, we look at what their weaknesses are and what they might struggle with. So we thought that since we were a little dead those first two innings, why not try to lay down a bunt to try to make something happen. Guys executed and it worked in our favor.”

The two bunts started a streak in which seven straight Crimsons reached base, After Noe’s bunt, Kam Davis (12, #21) reached on an error and Matthew Olson (12, #2) singled to center. Then Chris Gambert (12, #25), Aaron Sary (10, #32) and Sam Clinard (12, #22) smashed three consecutive doubles to plate four more runs and drive Lattis out of the ballgame. By the time Bynum came back to the plate for the second time in the bottom of the third inning, Manual had turned a 2-0 deficit into a 7-2 advantage.

“We got aggressive at the plate, hit a lot more balls and put a lot of quality at-bats together,” Gambert said. “In the first inning, he was throwing a little slow, and that threw us off a little bit.  We had a couple of bad at-bats and only saw five pitches in the first inning. But by the third inning everybody had already seen him once, then it was just sitting back and hitting that fastball, and that’s how we exploded.”

The Bearcats never fully recovered from the seven run inning, and after the Crimsons added another run in the fifth and four more insurance runs in the sixth, Manual coasted to an easy 12-4 victory.

“It took us one time through the lineup to figure out what type of sequence he was pitching,” Timbario said. “He was throwing backwards, throwing more offspeed for strikes. Once we figured it out, we had one good at-bat after the next.”

If there was one negative for the Crimsons in their win, it would be the way they started. After Olson gave up two first inning runs, Lattis retired the Crimsons in just five pitches. Lattis also pitched a perfect second inning before the Crimson hitters smacked him out of the ballgame the third inning.

“Early in the game, they had a pitcher that had a weird wind-up and delivery so I guess it took us a little bit of time to get used to that,” Olson said. “But then we found the fastballs and we hit it and found the holes, and we were able to put up a bunch of runs.”

After the first inning, Olson was able to find his groove as he pitched six strong innings for the Crimsons and gave up just three earned runs [one run was unearned] in his six innings pitched.

“He did well,” Timbario said. “I think it took him two innings to settle in, go in there and find his zone, figure out the hitters and get through the lineup. That’s what we expect from Pablo [Olson] and he went out there and did his job.”

While Olson didn’t strike many batters out, he did a good job of pounding the strike zone and forcing weak contact.

“I just got ahead early and I tried to throw as many strikes as I could,” Olson said. “I know my defense has me behind me so all I have to do is throw strikes and I’ll be fine.”

For Manual (14-12), the win snaps their two game losing streak, albeit the losses came against two quality opponents in Eastern and Bullitt East. Manual fell to Bullitt East 5-2 on May 4 and lost 9-6 in an eleven inning marathon to Bullitt East on May 5.

“I almost think that we can take some of those losses and use them as momentum builders,” Gambert said. “They [Eastern and Bullitt East] are very good teams and we hung with them. A loss is a loss, but we went 11 innings with Bullitt East and played them toe-to-toe. But we can definitely use this win as momentum to sweep the rest of this week and especially into next week and into districts. It’s a good start for this week; we’re trying to go 6-0 this week.”

Timbario wants to use the KCD win as a momentum builder for the rest of the season.

“We just have to keep building on this.” Timbario said. “If we go out there, and work on execution instead of worrying about what the scoreboard says, then I think we’ll be alright. If we just go out there and execute each play, each pitch, then we should be right in there in every game.”

The win over KCD starts an exhausting stretch for the Crimsons in which they will play six games in one week. Manual will then wrap up their regular season against Valley and PRP on May 16 and 19 before the postseason starts the following week. Even though the Crimsons have their doubters, they believe that they can make a deep run into the regional tournament.

“Don’t rule us out yet,” Gambert said. “We have an easier district with Shawnee and Central in the region. We’ve seen everyone in the region, and we can beat every single team in the region. We’re about to make a deep run in the Seventh Region baseball tournament.”
Manual will travel to Waggener to take on the Wildcats on Tuesday. First pitch is set for 5 p.m.