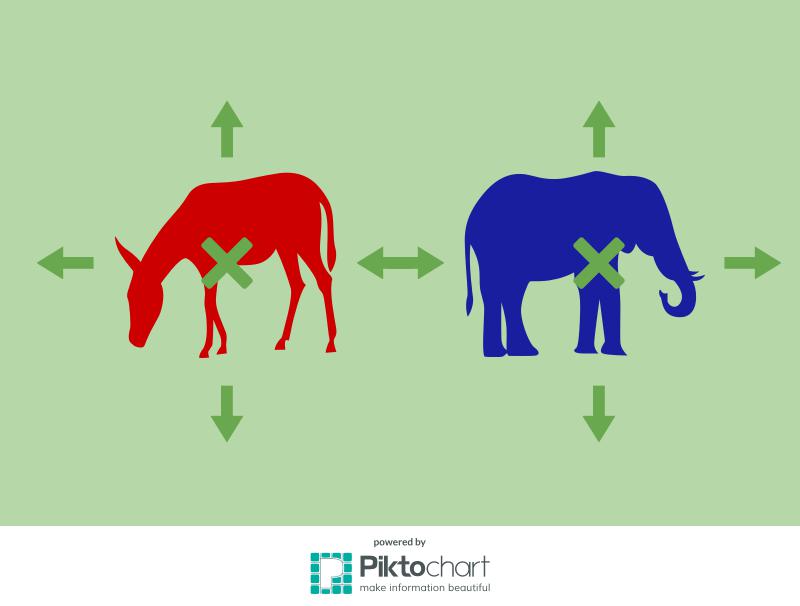 Before this election season went and flip-turned the political world upside down, we typically talked about political belief on a single dimension: the left or the right wings. Some more advanced systems, like the political compass Mr. Holman uses for his AP Government and Politics class, will instead separate social and economic ideology. Before the 2015-2016 chaos wrought by Trump (and to a lesser extent, Sanders), something about this two-axis system felt insufficient to me. Here I propose an axial system for classifying and measuring ideology that works on three separate variables.

First thing’s first: Too many wildly different factions tend to get grouped within the same quadrants in a two-axis system. The “Blue Dog” conservative Democrats who tend to support left-wing economic policy as well as conservative social policy (think Jim Webb or Robert Byrd, though Mike Huckabee represents the same strange breed for Republicans), who have largely seen exile from the Democratic party as polarization has accelerated, get slotted in the upper-left quadrant of the political compass. The problem is that one might place Communists, who support hardcore left-wing social policy but have traditionally existed within the right-wing on cultural issues, in the same quadrant. Though it is not well known, Communist regimes have largely denounced homosexuality and gay rights, a cornerstone of left-wing social polemic, as a result of the decadence of capitalism (this has been especially true of Cuba). Most reasonable observers would point out that Robert Byrd and Fidel Castro have nothing in common. And they would be right!

The reason that solely plotting out economic and social scores to determine ideology leads to us chasing our own tails over contradictions is that the political compass is trying to measure reality in 2-D. That is to say, it leaves out an important third variable that has started to come to the fore in this election: authoritarianism. The political compass’ fatal flaw is that it conflates conservatism with authoritarianism, when these two dimensions of our thought aren’t as united as many of us would like to believe. Sure, substituting one concept for another makes enough sense when conservatives support prayer in schools or military aggression. But it stops making sense when they oppose gun control or speech codes, taking decidedly anti-authoritarian stances. The truth is that there is an authoritarian left that is gaining clout on American campuses (as has been documented extensively by the Atlantic’s Conner Friedersdorf) just as there is an authoritarian right spearheaded by Donald Trump. One of the virtues of my three-axis model is that it seeks to approximate these crucial differences. My hope is also that this test avoids some of the bias and imprecision in the wording of the original compass.

While the concept of applying Authoritarianism to politics more broadly has been bandied about fairly extensively this year in response to Trump, this instrument is unique in that it recognizes authoritarianism as an unmistakably political value- one that is strong enough to override the conservatism of many conservatives who meekly rally around Trump in spite of his apostasy on conservative cultural values.

Three scales are identified and measured according to this theory. The first is economic interventionism versus economic non-interventionism. Traditionally associated with the left (and more generally the Democratic party since the days of FDR) people who score higher on economic interventionism tend to favor more government involvement in the economy. This isn’t a hard and fast rule- the DLC and New Democrats of the Clinton era, who supported welfare reform and free trade, tend to exist on the non-interventionist side of this spectrum, where Republicans and Libertarians abound. Higher scores on this variable indicate a preference for non-interventionism, lower numbers show a liking for interventionism. This is arguably the most clear-cut of these variables, and it’s the one that the original compass gets pretty much right.

The third and final axis I use is the one between authoritarianism and liberalism. This may be confusing for some people, because I use the philosophical as opposed to conventional definition of liberalism. Stanford Encyclopedia of Philosophy points to liberalism not necessarily as support for social change, but rather a support for expanded civil liberties. This means that liberalism and conservatism are not, as is popularly assumed, mutually exclusive. Many Libertarians, like our Senator Rand Paul (though this is debatable based on his voting record), are both of these things, voting at once against both pro-abortion measures as well as NSA surveillance or imperial foreign policy such as authorizing drone strikes. Higher scores on this axis suggest someone is more authoritarian, while lower scores suggest that one is more liberal.

It’s worth reiterating that no value judgement is made about any of these variables, in spite of the negative connotation that authoritarianism carries. There isn’t anything good or bad about any of these things by default. Feel free to take our test for yourself to see where you map out.

If you would like to take the test, head over to manualredeye.com/political_cube.