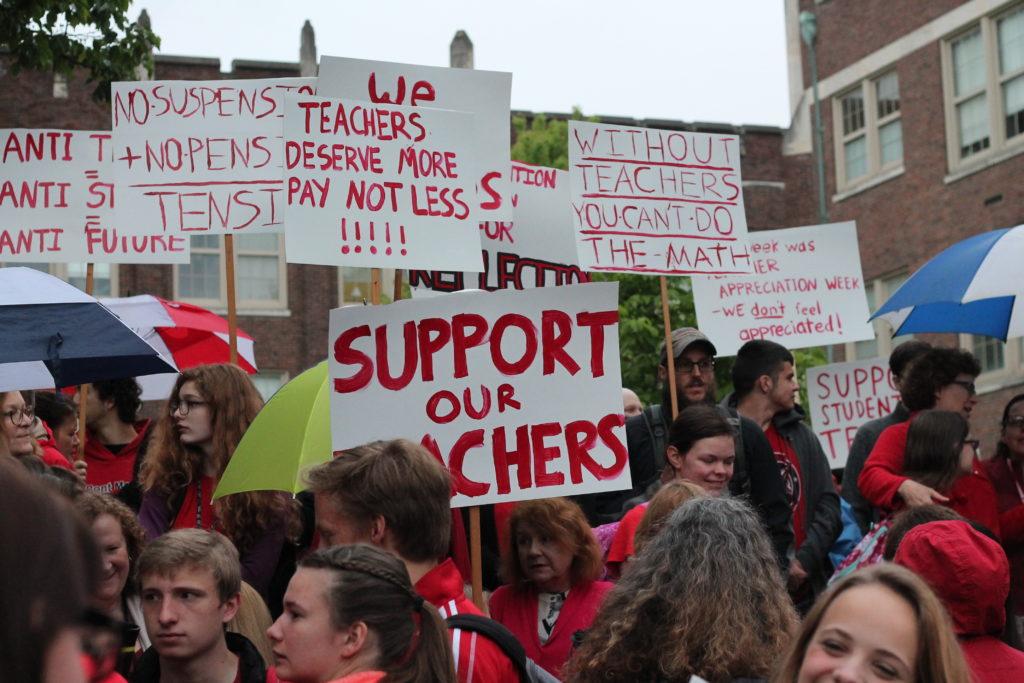 In light of a recent JCPS audit, the Board of Education is considering potentially freezing teacher salaries. Teachers, parents and students all across Jefferson County have organized in order to peacefully protest against the proposed changes, which also include revisions to the code JCPS of conduct. The suggested changes to the disciplinary code would take away the option of short-term, school level suspensions for a myriad of offenses.

“I think it’s ridiculous that they are considering allowing the code of conduct to be more lenient,” Lilian Tapia Fernandez (10, HSU) said. “Some schools are violent as it is, and students should be punished for their wrongdoings in order to maintain safety and for the students to learn that their actions have repercussions.”

JCPS teachers and members of the Jefferson County Teachers Association (JCTA) were not notified about the 1,000 page audit until after it went public on April 26. Dozens of JCPS schools, including Manual, have staged walk-ins in order to demonstrate their opinion in a professional, non-violent way.

“I think it’s very important to have a voice, and stand up for what you believe in when you realize that there’s unfair treatment, or that our students aren’t going to be put in situations where they can thrive, grow, and be safe,” Beth Stottman (Social Studies) said.

Manual’s walk in took place on Thursday, May 5 at 7 a.m. between the front entrance of the school and Noe Middle School. Teachers from both schools as well as students and parents attended this event and wore red in order to show their support and solidarity with the teachers

“I came to the walk in this morning to support my teachers, because if we didn’t have them here we wouldn’t have the resources we need to succeed in school,” Auzzie Dodson (11, YPAS) said.

Corey Doak (Mathematics) went more in depth with his critiques of the audit, including a major flaw in the study: it was originally not even supposed to include teachers.

“It was suggested to JCPS that they conduct this study on those administrators who made over $100,000, meaning those in the central office,” Doak said.

In addition to this, Doak said that the presentation shared with him and his fellow teachers was so unorganized that it was incomprehensible.

“One document was over 950 pages of just tables and numbers with no explanation as to how to read it, not to mention it did not include teachers,” Doak said, “next there was a 50 slide PowerPoint that had extra slides, repeated slides, and they were all in a jumbled mess with no linearity or clarity about what it was supposed to reveal.”

Another concern brought about by Mr. Doak was that the data collected from teachers is not usable in the audit. An email survey to collect data was sent to all JCPS employees last spring, and it was included in the email that the survey was only to be completed by classified, non-instructional employees. However, Doak thinks it’s possible that some teachers may have overlooked this piece of information and filled out the survey anyway.

Closely following Manual’s walk-in and the release of this information, on May 10, current and retired JCPS teachers protested outside the JCPS Van Hoose Education Center. This represents a growing unrest amongst JCPS employees, some of which are fostering animosity towards members of the school board. The board was scheduled to vote on the pay freeze proposal during this meeting, butwas taken off of the board’s agenda due to backlash from the community.

As of press time, the school board has not brought the decision to the table in a meeting.