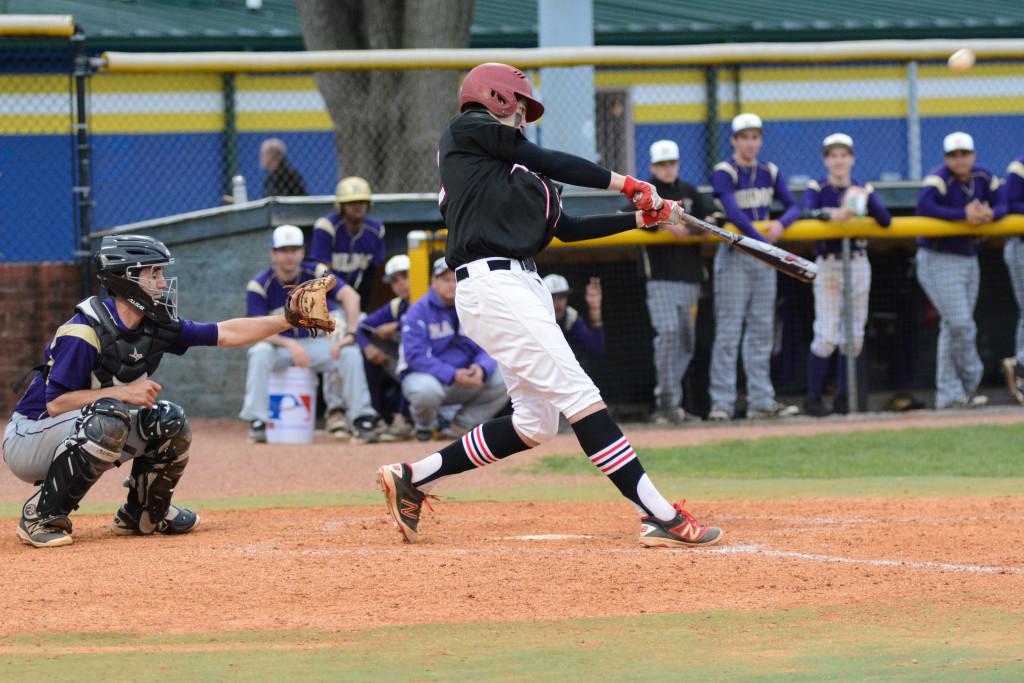 The Crimsons took early control of the game behind a strong pitching performance from Brian Hoffman (15, 12). The tempo and momentum were on their side for most of the game.

After being up 4-2 at the start of what the team thought would be the last inning the Crimsons looked to pull away. Chris Gambert (25, 12) scored off of a passed ball to raise the score one more making it 5-2.

After Drew Marquardt (11, 12) popped out for the final out of the inning, the second half of the seventh inning was about to begin.

The Crimsons knew the Bulldogs wouldn’t go down without a fight. With bases loaded and two outs, both teams were looking for victory. The Bulldogs scored two runs when Noah Thompson (15, 11) singled to right field. The Bulldogs now trailed 5-4 in the bottom of the seventh.

An error by Manual in right field led to Thompson to try for the tying run in the bottom of the seventh. A play at the plate with Thompson running over Manual catcher Gambert resulted in Thompson being ejected for not attempting to slide. This caused his run to not count and was the final out of the inning. The game was headed to extra innings with a score of five all.

After the eighth inning the game was still tied at five making a ninth inning one to count on for the Crimsons. After a single to left field and a steal by Matthew Olson (2, 12), Gambert came to the plate with 2 outs. He has been the lifeline for the Crimsons all season, and he delivered a single to right field to score Olson from second. The Crimsons led 6-5 in the top of the ninth inning.

Now at the bottom of the ninth the Bulldogs had the bases loaded with two outs, it was sudden death. Brennan Poole (23, 12) caught a fly ball, causing the Bulldogs to get their third out, and lead the Crimsons to their 6-5 victory.

The Manual Crimsons will play the St. X Tigers Thursday night at 5:30 in the seventh region final at Jim Patterson Stadium. The winner will advance to the state tournament.