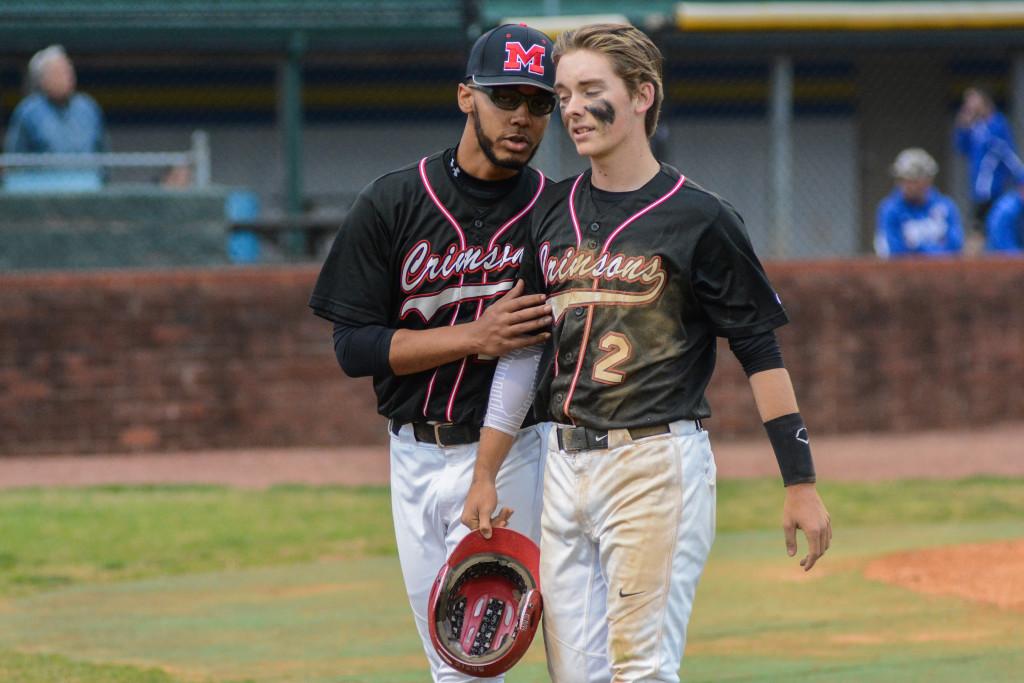 Dominant pitching from both teams led to a low scoring affair, which favored the Tigers.

The Manual Crimsons played host to the St. Xavier Tigers, today, at six pm, at Jim Patterson Stadium. The two teams met for the seventh region championship game, the winner punching their ticket to the state tournament.

The Crimsons came out of the starting gate on fire, with Matthew Olson (2, 12) striking out the first two Tiger batters. Aaron Sary (32, 10) ripped a double to right field in the bottom of the first. After St. X pitcher Adam Elliott (5, 12) hit a batter, the Crimsons had the bases loaded with one out. Elliott managed to escape the jam with a strikeout and a ground out.

The Crimsons’ fierce start did not carry over into the rest of the game as both teams seemed to be going through the motions offensively.

In the top of the third inning Olson walked a batter who then stole second, giving the Tigers a runner within scoring position. In the next at-bat Elliott rocketed a ball to right field, sending the Tiger base runner home for the first run of the ballgame.

In the top of the sixth inning the Tigers scored another run off a triple by Sam Hedges (12, 11). St. X led 2-0 going into the bottom of the seventh inning.

Down to their final three outs the Crimsons looked to put together a comeback — something that has defined their postseason. In the first round they played through 10 innings to finally beat Christian Academy of Louisville and in the regional semifinals they out dueled Male in nine innings. However, their magic ran out as the final outs of their season were recorded.

At the conclusion of the game Keenan Bilyeu (20, 11), Chris Gambert (2,12) and Olson were named all-region players.
St. Xavier will face Greenup County in the first round of the state tournament next Thursday at six pm in Lexington.