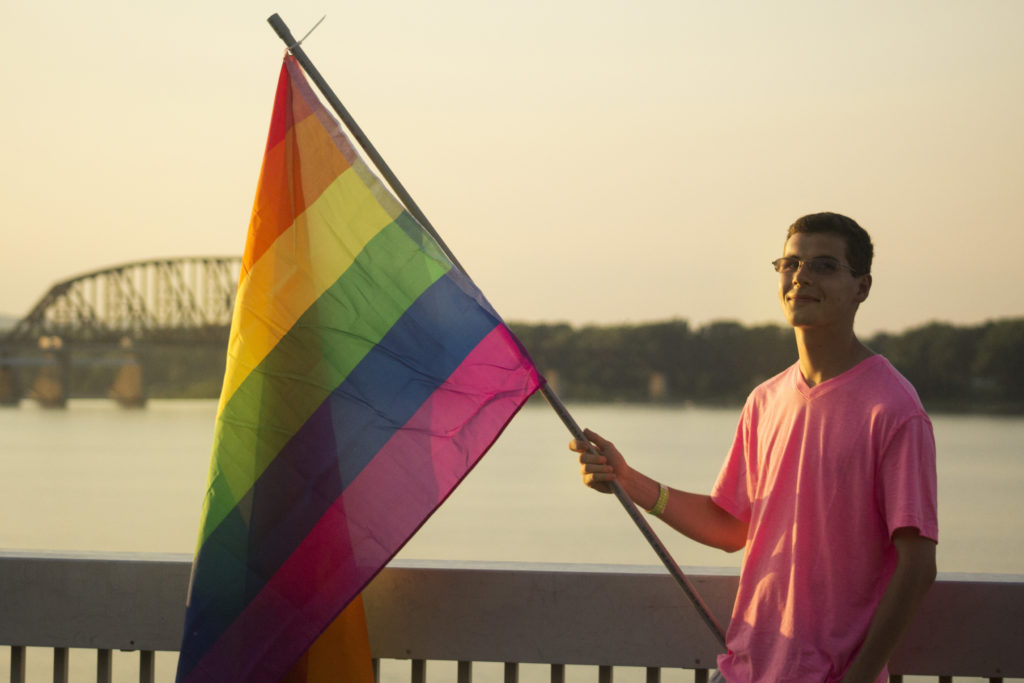 Pride began with a parade, consisting of floats made by the community, drag queens, supporters from around the country and people from the crowd who just wanted to show some love.

Manual student, Joey Heberle (11, HSU), walked with an organization called Fairness. His parents are the coordinators for the pride parade.

“I’ve walked in pride parades before for ACLU (American Civil Liberties Union), but I felt like this one was a lot less crazy,” Heberle said,“Maybe that’s just because the last time I walked, the float behind us had male strippers in cages. I wasn’t used to that.”

The Pride Festival followed the parade, bustling with food, information booths, LGBT+ themed clothing vendors and music that could be heard across the Ohio River.

“It’s powerful when a large group of people can rally together and just accept one another and celebrate everyone’s individuality,” Bullitt East alumni Joel Huether said.

As the sun set and it became dark, a few surrounding buildings showed their support for the LGBT+ community with rainbow streamers, banners, and fireworks.

This year’s pride concluded with a Jordin Sparks concert, which was easily the most anticipated music performance of the festival.

“She kept saying thank you and how much she loved all of us and she performed a song that she never performed before,” Andi Wood (11, HSU) said, “She even had a prayer for Orlando, It was so sweet! And a bonus was a lesbian couple got engaged near us during the show!”

This Pride celebration was different due to the wake of the Orlando shooting just days before.

“I’ve walked in Pride parade’s before for ACLU,” said Heberle, “But this one was definitely more emotional with Orlando and all.”

“[The Orlando shooting] definitely worried me a little, and my parents were really worried about me going and almost didn’t let me,” said Jamie D’Amato (12, J&C), the active creative director of Manual’s Gay, Straight, Transgender Alliance, “But, if anything, it just made me want to go even more. The whole point of pride is to feel safe and accepted, and I felt like not going would be letting them win, as cliche as it sounds to say that. Plus, going there let me honor the victims better than not going because a lot of performers took time to talk about them, and a lot of people in the parade honored them too.”

However, for some, this was only their first time at a Pride celebration. Zach Edwards (10, MST), described it as a “fun and happy experience.”

“I was expecting a couple hundred people there and I was really surprised by the amount of people that was actually there,” Zach said, “I had a lot of fun and met a bunch of new people. I felt very loved being there.”

Many festival partakers, like D’Amato, took time to reflect on the significance that the pride parade held, especially in the wake of current attacks against the LGBT+ community.

“Pride festivals are a way for LGBT+ people to say like, ‘We’re here, we’re queer and we aren’t going to change who we are to satisfy you,’” said D’Amato, “They provide a place to feel safe and open if you don’t have a supportive family, or if you do, then [they provide] just a place to be with people who understand what you’re going through. It’s a place to be happy and proud of who you are instead of hiding [your identity] like so many have to do every day.”