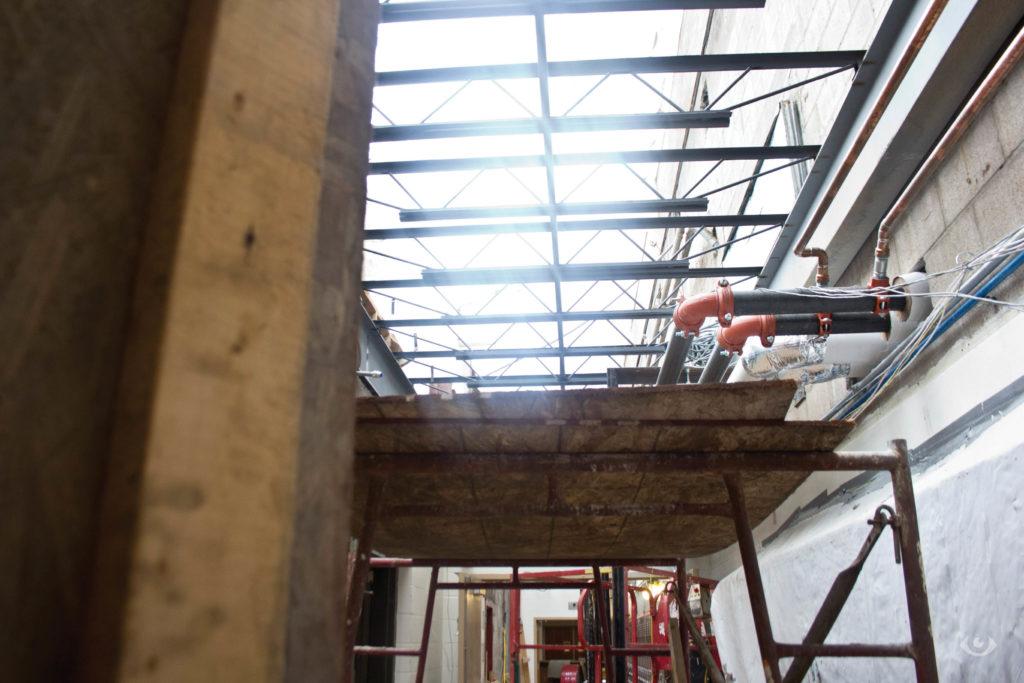 Construction hole in the ceiling above the back hallway towards the canteen Wednesday Aug. 17, 2016

Renovations that started at the Youth Performing Arts School (YPAS) back in February 2016 — a project that would change both the appearance and infrastructure of the main building — are still ongoing as the first full week of school ends.

Construction workers began by replacing the building’s obsolete heat/ventilation/air-conditioning (HVAC) system, which dated back to 1978 and was beyond economical repair, with a brand new system which isn’t quite ready yet, according to YPAS assistant principal Bryan Crady.

“The bugs of the system are being worked out,” Crady said.

“Some rooms are nice and cool, some are a little muggy as they [contractors] get that figured out. Part of it is because some of the building is wide open because of construction, so we have a big hole in the back of the building right now,” Crady said.

The YPAS main auditorium is the biggest piece of the project, requiring extra funding for the replacement of the seats that were about 38 years old.

“Some were broken, and some were dangerous,” Crady said.

Other renovations include three new restrooms compliant with the Americans with Disabilities Act, an elevator, and new LED lighting throughout the building.

The project required cooperation from all YPAS faculty. “Our teachers worked one and two weeks extra just to get all of their stuff put back in their rooms, and we’re still putting things away,” said Crady.

Contractors are also working with Crady and the YPAS staff to minimize the disruption the renovations cause. “Contractors are avoiding drilling into walls that will make a lot of noise during rehearsals and practice,” said Crady.

The renovations are expected to be done by Halloween.