This Week In Manual Athletics: August 29 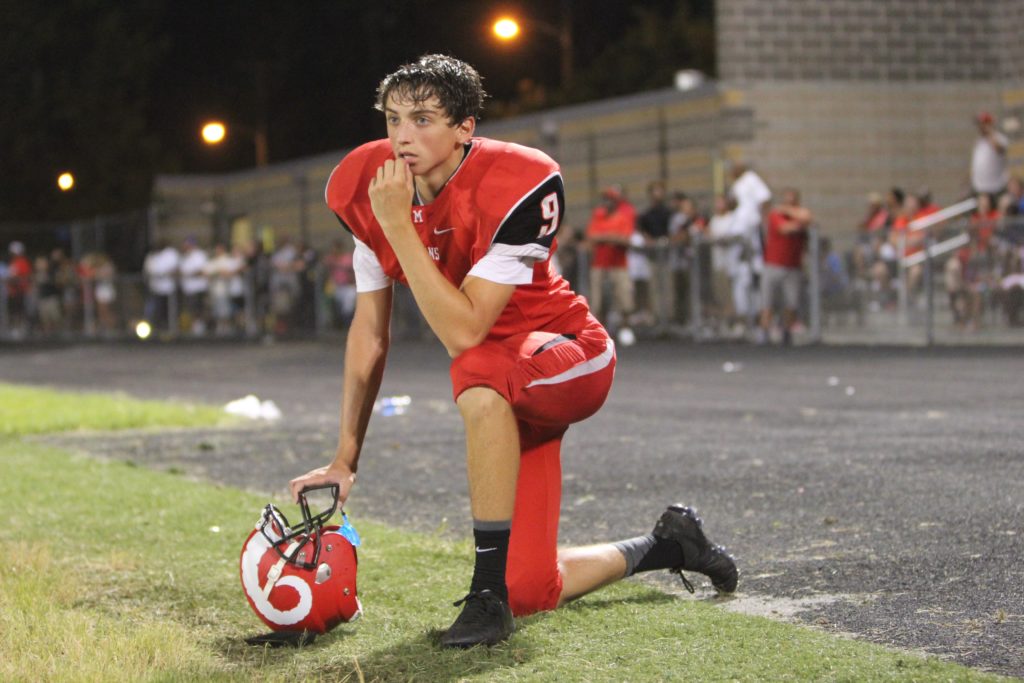 Before going on the field Nick Kopp (9, 11) takes a moment to himself. Photo by, Cicada Hoyt.

Manual dominated Fern Creek 14-0 on Friday night, only allowing the Tigers to gain a total 74 yards of offense. The Crimsons look to extend their win streak to three games this Friday against Seneca. The game will be played at Manual Stadium at 7:30. Last year, the Crimsons beat Seneca by a score of  57-0. Seneca (0-2) has lost to Fern Creek and Western so far this season. Junior Varsity will play at Valley on August 29 at 5:30.

Last week the Girl’s Golf team dismantled the Male Bulldogs and defeated Christian Academy of Louisville. This week they look to continue their dominance as they take on Butler at Crescent Hill on Aug. 29 at 3:45 and North Oldham at Shawnee Golf Course on Sept. 1 at 4:30.

The Boy’s golf team triumphed over Bullitt East last week by a score of 159-162. Robbie Keyes shot a 34 to lead all scorers. Keyes made news off the course this week when he committed to Xavier University to continue his academic and golf careers. This week the team will take on Male at Shawnee on Sept.1 at 3:30. They are also scheduled to play in the Rowan County Tournament on Sept. 3 starting at 9:00 a.m.

The varsity Field Hockey team made it to the semifinals of the annual Apple Tournament at Sacred Heart before being knocked off by Sacred Heart, by a score of 4-0. This week they look to bounce back as all three levels (Varsity, JV, and Frosh) will play at Mercy on Aug. 30. The freshmen will play at 4:30, followed by JV at 5:45, and then Varsity at 7:00. The Varsity team will play in the Gateway Classic in St. Louis, MO from Sept. 2-3.

The Cross Country teams enjoyed success in the past week as both the Boy’s and Girl’s squads finished in the top three at the Tiger Run on Saturday, Aug. 27. The girl’s team earned first place while the boy’s team finished in third. The teams aren’t scheduled for any meets this week, they will resume action on Sept. 6 at the JV 3k at Charlie Vettiner park.

The Varsity team got off to a rough start after losing to Oldham County and Presentation last week. The Crimsons look to bounce back this week against Seneca and Central. The Seneca matches will be on Aug. 30 with the freshmen playing at 5:00, JV at 6:00, and Varsity at 7:00. The Central matches will be on Sept. 1 with JV playing at 6:00 and Varsity at 7:00. Both sets of games are away games.

Last week the boy’s soccer team dominated Collins HS (Shelbyville) by a score of 4-1. The JV team lost to a very talented Collins team 4-2. The Varsity team looks to continue its hot streak when they take on St. Francis on Aug. 30 at St. Francis at 5:30. The JV team hopes to bounce back when they play Floyd Central (Indiana) on Aug. 31 at 7:30 at Manual Stadium.

Manual starter Emina Ekic was named to the USA Today Preseason All-USA Girl’s Soccer team on August 23. However, her presence on the field will be missed as she is sidelined with an ACL injury until October. This week they Girl’s teams will take on Mercy at Mercy on Aug. 31 with JV at 5:30 and Varsity at 7:00. On Sept. 1 they will take on Assumption at Manual Stadium (JV- 5:30, Varsity- 7:00).